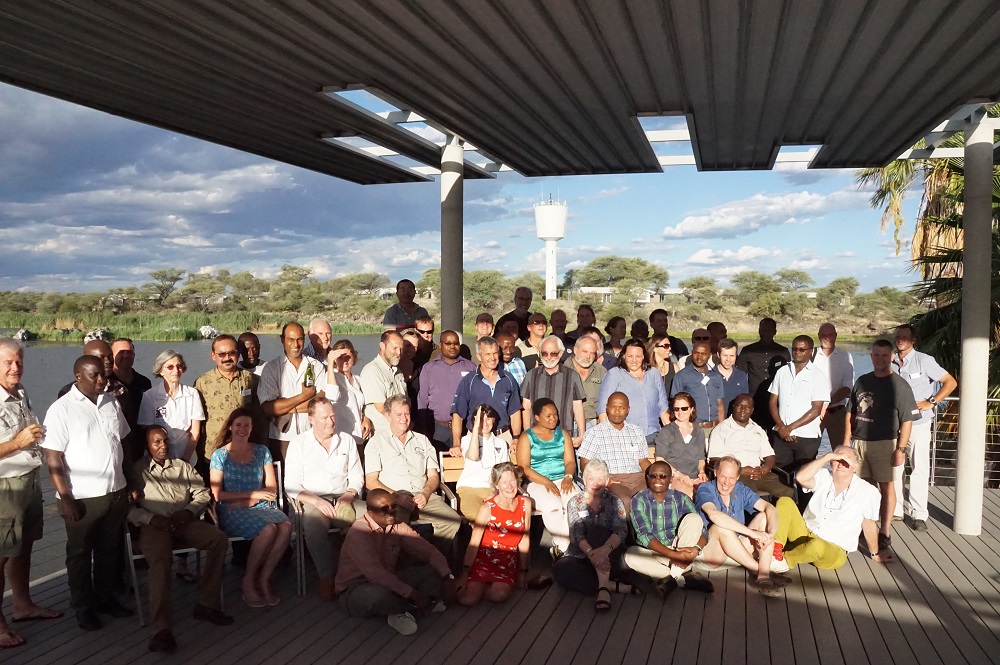 Getting 71 people from 18 different countries to a conference venue 2.5 hours’ drive from Windhoek in Namibia is no mean feat. Add in different arrival and departure days, dietary requirements, room-sharing allocations and a packed 6-day agenda, and you have a recipe for an A-grade headache. Fortunately, I had a funky little spreadsheet, the help of a hyper-efficient events team at Key Travel, a good knowledge of world and Namibian geography, a (rather limited) supply of patience, some lovely donors to pay the bills, and a determination to make the 13th meeting of the IUCN SSC African Rhino Specialist Group (AfRSG) a resounding success.

Until the 2013 meeting, all the logistics for AfRSG meetings were handled by the Chair (now Dr Mike Knight) and Scientific Officer (Dr Richard Emslie) but, frankly, they’ve got other priorities: persuading inter-governmental agencies to collaborate, analysing rhino population data, supporting the development of national rhino conservation 5-year action plans etc. Whereas at Save the Rhino, the second of our rhino conservation strategies is:

One of the ways we deliver this strategy is by taking on the task of arranging all the logistics for the AfRSG meetings, which take place every 2 – 3 years, depending on the timing of CITES’ Conferences of the Parties.

Preparation for the 2019 AfRSG meeting, which took place from 4 – 11 February 2019 in Gross Barmen, near Okahandja in Namibia, began back in March 2018. This involved researching potential meeting venues, considering internal transfer options, drafting a participant list and agenda with the Chair, getting flight itineraries, and comparing quotes. Confirmation of funding duly came through from USFWS, together with other funders – WWF-South Africa, the International Rhino Foundation, African Wildlife Foundation, Oak Philanthropy and our own Trustees – and work in earnest began in November 2018.

In my fantasy world, everyone would reply within 24 hours to my first email with all the information requested. In the real world, I received more than 900 emails regarding meeting logistics (I haven’t dared count the number of emails I had to send to get that information). Airlines cancelled flights, permissions to travel arrived a day too late for some would-be attendees and visa applications needed ever more complex supporting letters. Ultimately, everyone got to the meeting with my sanity mostly intact, though my patience was admittedly in deficit.

The hard work put in by the Chair on drafting the agenda paid off, with welcome changes of pace each day between presentations in plenary, breakouts into smaller working groups on particular issues, and a field trip to Waterberg Plateau Park on Day 4. A large swimming pool, great food, excellent conference facilities, fantastically helpful staff at Gross Barmen and a well-stocked bar all played their part.

As ever, some of the most useful and productive discussions were outside the conference room: while swimming in the pool, walking around the lake from the restaurant to our rooms, or on the terrace with a sundowner (long sunsets in Namibia at that time of year). Many of us have known and worked with each other for years, and new recruits were proactively introduced to others with shared interests and concerns.

One of my other tasks for the meeting was to conduct a skills audit of AfRSG Members. Using the eight pillars of the African Rhino Range States’ African Rhino Conservation Plan, the Chair, Scientific Officer and I had constructed a list of skills that we thought were necessary for good rhino conservation, as well as providing room to list other skills. Each Member was asked to rate themselves for each skill: Highly Skilled / Skilled / Some Experience / No experience. I got a 100% response rate (after eleven billion more of those damn emails). I presented the results back to the Group, with a traffic-light system to highlight the areas in which the Group is well-represented, and where we lack expertise.

I added “Logistics” to the section enquiring about other skills. I think it’s pretty important to have this ability, if a group is to function well, and I’m really pleased that Save the Rhino International can make this contribution to African rhino conservation.

I’m now working on the proceedings from the meeting for Members: great progress was made in some key areas, and a number of topics will be taken forward by short-term working groups. It is definitely worth the hassle of getting everyone together for 6-days, isolated from normal distractions, to talk rhino. (But thank goodness it’s all over for another 2 – 3 years. Being good at logistics doesn’t mean it’s what I want to do full-time.)

PS: An esteemed colleague offered “Bulls*** detector” as his other skill. Now that’s one I’m really going to work on for next time.