You are here: Home » News » Solving crimes and keeping the peace with the Dog Squad 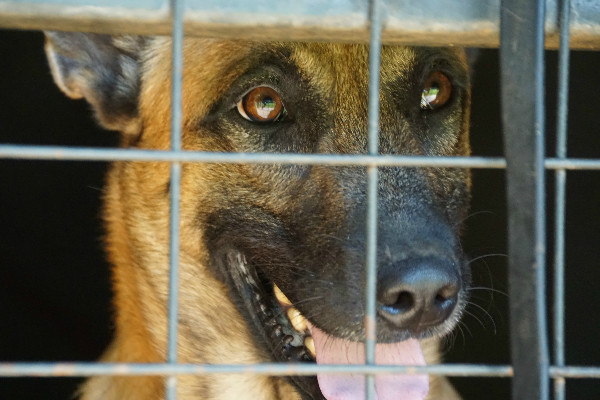 Our Rhino Dog Squad appeal in 2015 raised over £60,000, split equally between the three canine units at Ol Pejeta Conservancy, Ol Jogi and Lewa Wildlife Conservancy in Kenya. While at Lewa, I was keen to meet the dogs and their handlers to get an update.

Joseph Piroris is in charge of the canine unit, and is 3rd in charge of Lewa’s anti-poaching team. He began at Lewa as a rhino monitor, was then moved to the radio room to handle all the signal traffic, promoted to the anti-poaching unit, and then promoted again, to serve under Selea and ultimately Edward Ndiritu. Lewa’s policy of recruiting at the bottom and then promoting internally means that those with the most aptitude and who are thoroughly trusted can rise up through the ranks into positions of great responsibility.

Lewa’s canine unit currently has four dogs and eight handlers; two for each dog. There are two Belgian Malinois (Jack and Zac) imported from Malpeet K9 in the UK, and two bloodhounds (Toby and Tipper) that came from Ol Jogi. All four dogs work as tracker dogs, and are trained to follow human scent only. Having had initial training in the UK and at Ol Jogi respectively, they now have continuation training six days a week, when their handlers lay a scent trail – recreate a crime scene, run away and hide – and their handlers work with the dogs to cast about to find the scent and track the “suspects”. So that the dogs don’t become bored, the handlers mix up the times of day for these training exercises, as well as taking them for frequent walks to keep the dogs fit and happy. For ordinary walks, the dogs simply wear a collar and leash, but when they are on a training exercise or live deployment they are put into harnesses; the dogs then immediately know that they are at work. When on a trail, the dogs are taught to remain silent, so as not to alert the fugitives; the handlers can tell when they are getting close to the quarry as the dogs often wag their tails vigorously or strain at the harness even more than usual.

Early on in the training programme, the handlers work out what type of reward the dogs like best: a toy or food. At Lewa, Jack likes his toy – a knotted rope that he can chase and play tug-of-war with – whereas Zac, Toby and Tipper want food treats. Just like humans, the dogs have different personalities, and most days they’re keen and are enthusiastic about work, but sometimes they feel lazy and don’t want to work.

The kennels are cleaned every day, and once a week they undergo a deep clean, when the mattresses are scrubbed, everything is sprayed down and the dogs are given a bath, a full grooming session, checked over for ticks, their claws trimmed if necessary, and receive occasional doses of Frontline flea spray. Lewa’s vet, Matthew Mutinda, is called in to assess any injuries or sore spots, and any dog needing more sophisticated veterinary care is sent to a centre in Nanyuki for treatment. They are fed once a day: a large bowl of dry Pedigree Chum biscuits that contain all the right supplements.

Joseph told me about a few recent successes. Although there haven’t been any rhino poaching incidents on Lewa for some time, the canine unit’s help is often requested for incidents in the surrounding community areas. For example, on 28 April, three men broke into a lodge at Buffalo Springs and attempted to then break into the safe. The night-watchman spotted them while making his rounds and scared them off. Lewa’s canine unit was deployed and tracked the scent trail to Archer’s Post some 15 km away, where they called together the elders and gave them the names of the suspects. The elders said to leave the matter to them; they would talk to the fathers of the suspects. Similarly on 8 May, there was a report from some game scouts that one of the camera traps on the elephant corridor had been stolen. The canine unit found footprints, picked up the scent, and followed it for 5 km. There it ended in a village, where the scent trail was too confused with that of other people to make a definitive identification, but once again the village elders said that they would call a meeting, find out who had stolen the camera and deal with him.

The local communities around Lewa see the canine unit as a great asset, something that can help them solve crimes and even deter criminals. In this way, Lewa’s canine unit is something of a “peacekeeping force” – a phrase that made me smile as I’d just heard how excited and vocal the dogs become when someone visits their kennels. The peace only begins when they start work…