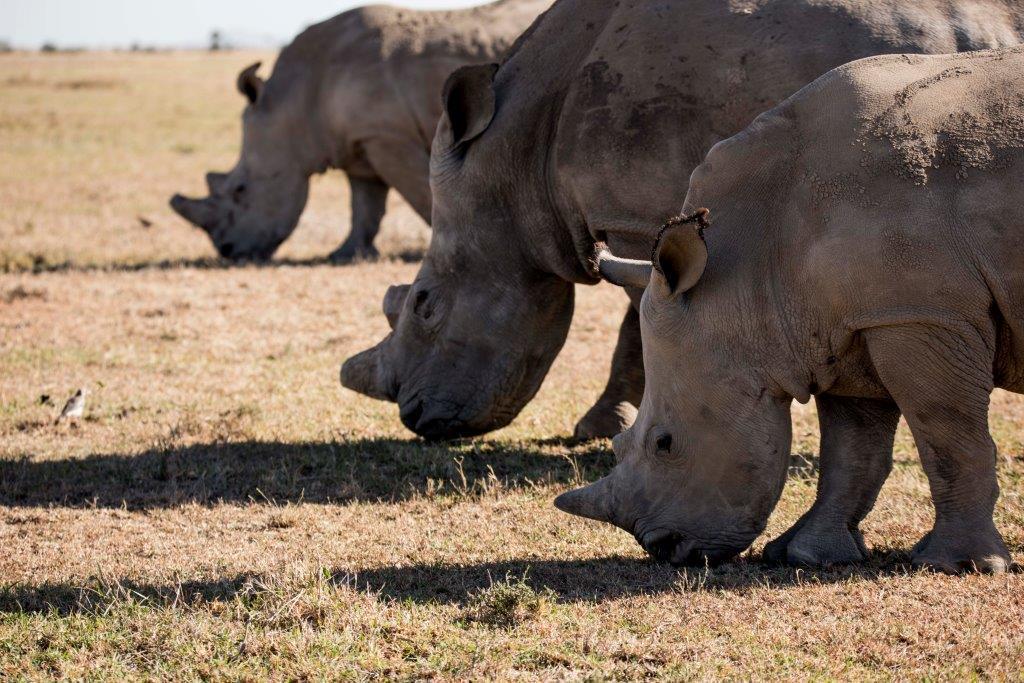 There are several key international meetings and conferences this year with significant impacts for rhinos. Below we take a look at the African Rhino Specialist Group Meeting and the 17th CITES Conference of Parties.

Save the Rhino’s Director, Cathy Dean, is a member of the African Rhino Specialist Group, which aims to promote the recovery and long-term management of viable populations of the various subspecies of Africa’s rhinos in the wild. The AfRSG is one of about 130 IUCN SSC (International Union for the Conservation of Nature, Species Survival Commission) groups focused on particular taxa, in this case, white and black rhinos.

The AfRSG consists of a variety of rhino experts who operate as a network to address both strategic (e.g. government rhino policy) and implementation challenges for rhino conservation, ensuring that the best scientific knowledge is used as the basis for decision-making and field conservation programmes.

Save the Rhino has been busy organising the logistics for the upcoming AfRSG meeting in February 2016. Seventy experts from 18 countries will gather to discuss a range of topics, including range state reports, support programmes, responses to poaching, the demand for rhino horn and how to address that demand, sustainable rhino conservation efforts, community engagement, etc. Save the Rhino also contributes significantly to the AfRSG by producing collating, editing and compiling the meeting’s proceedings, which are disseminated to members.

One of the most keenly awaited sessions is the final overall tally of African rhino population numbers as at 31 December 2015. This figure will tell us whether white and black rhino population figures have increased or decreased since they were last compiled at the end of 2012. A press release from the IUCN, expected late February / early March, will confirm these figures.

There are likely to be heated debates this year amongst conservationists and rhino stakeholders ahead of September’s 17th CITES Conference of Parties to be held in Johannesburg, South Africa.

CITES (The Convention on International Trade in Endangered Species), is an international treaty created in 1973, to protect wildlife against over-exploitation, and ensure that trade in specimens of wild animals and plants does not threaten their survival. Every three years, the parties gather in a Conference of Parties (CoP) to address proposals to amend CITES’ appendices, which can have an important impact on endangered species such as rhinos.

The Standing Committee for CITES holds regular meetings to discuss the progress made and is attended by nations that have signed the treaty, intergovernmental agencies, and wildlife conservation non-profits. From 11 to 15 January, experts gathered for the 66th CITES Standing Committee meeting in Switzerland. There were many topics of discussion including the plight of the world’s elephants and rhinos.

Vietnam and Mozambique were again the subjects of discussion. Vietnam, which is thought to be the largest consumer of rhino horn, is required to demonstrate greater commitment in tackling its role in the illegal wildlife trade, including reporting on seizures, arrests and measures implemented to reduce the demand for rhino horn. Mozambique was urged to undertake action and submit necessary reports within the allocated timeframes. It was strongly recommended that Mozambique enforce its new wildlife law, whose lax implementation has failed to deter criminal gangs and kingpins from using the country as a smuggling conduit for rhino horns from South Africa to consumers in East Asia. Mozambique is required to report back on progress by September and could be sanctioned if improvements are not made.

The big question – legalising the trade in rhino horn

There is much speculation that South Africa will table a proposal asking CITES to legalise the international trade in rhino horn at the CoP in September. Those in favour of a legalised trade, including many private rhino owners with significant stockpiles of rhino horn, argue that the funds raised from a legalised trade could be ploughed back into rhino conservation efforts.

In February 2015, South Africa’s Department of Environmental Affairs recruited a ‘Committee of Inquiry’ tasked with investigating the feasibility of a trade in rhino horn. The government has until April to submit a proposal to CITES for consideration at the September meeting. There are still many questions to be answered as to how a legal trade would be enforced and with which country South Africa would actually trade.

CITES requires a two-thirds majority vote of the 181 member countries in order to pass any change.