You are here: Home » News » An orphan called Meimei 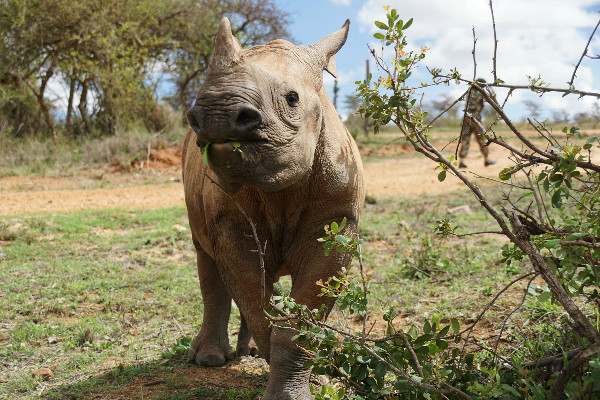 Ol Jogi’s Conservation Manager Jamie Gaymer contacted us in 2016 to ask for help: the rhino bomas (enclosures) at Ol Jogi were filling up. There are three sections, but currently three black rhinos need veterinary or hand-rearing care: Meimei, Alfie and Bobbie. With only the three enclosures within the boma, it is hard to keep them clean and free of heavy parasite loads. With the risk of more animals potentially needing boma-care, Jamie wanted to subdivide the existing three sections into five, and to build new housing to accommodate the rangers that guard these rhinos night and day. In stepped the Anna Merz Rhino Trust, Yorkshire Wildlife Park and Tallinn Zoo, and work on adapting the bomas will begin in June 2017.

Meimei, the youngest of the three, was born on 14 March 2016 and found four days later stumbling around, blind in both eyes. Her mother, Manuela, would have been unable to protect her from predators and it was very fortunate that the rangers found the little calf.

She was brought into the bomas, fed gallons of formula milk and, after five months of treatment with eye drops, fully recovered her sight.

At 14 months old, she still needs her daily milk but is now browsing on shrubby acacia and lucerne, and is being let out every day into a much bigger paddock to forage for herself. As she grows bigger, she will gain in confidence and there is every hope that she will be able to be successfully introduced to the wild, so that she can live independently.

For now though, she’s the most adorable, affectionate little black rhino, who loves to follow around her keeper, a ranger called Laivet Lazaikong. Lazaikong is a natural for the job and his bond with Meimei is obvious.

4 thoughts on “An orphan called Meimei”