You are here: Home » News » Vote Save the Rhino 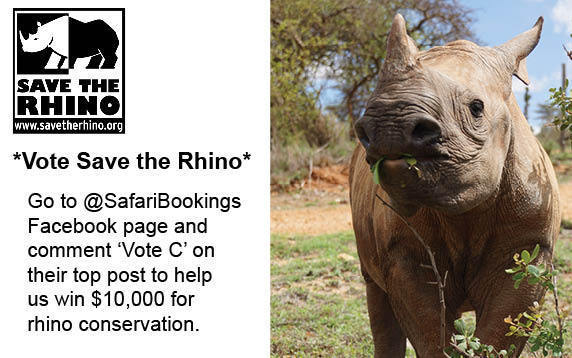 *Exciting news* over the next couple of weeks we will be taking part in a SafariBookings competition. We will have the chance to win $10,000 for rhino conservation. We are up against some pretty fab competitors, including our brilliant partners and friends International Rhino Foundation and Endangered Wildlife Trust

We would love to win but we would be happy for any of these brilliant charities to pip us to the post.

You – the reader – will determine the winner of this rhino donation campaign! To vote for Save the Rhino go to the Safari Bookings Facebook page http://bit.ly/2iMBTbt and comment ‘Vote C’ on their top post to help us win $10,000 for rhino conservation. Voting ends at noon on Monday 18th December.

Why vote for Save the Rhino?

At Save the Rhino, we want to see all five rhino species thriving in the wild. We know that rhino poaching has reached crisis point, and across the globe rhino habitat is shrinking. It’s shocking that today, three of the five species of rhino are critically endangered, and two of them have fewer than 80 animals left in the wild.

The good news is that we believe we can stop poaching and habitat loss so that in 20 years’ time, rhinos will no longer be critically endangered. To achieve our ambitions, we’re working with the best people and projects to protect rhinos.

Our top priority is saving rhinos and growing the global population. At the heart of our work is supporting the heroes in the firing line – rangers. We’re championing community-led conservation, so people living near rhinos are inspired to protect wildlife too. Across the world we’re sharing information, so that conservationists have the best skills possible to tackle the illegal trade in rhino horn at every point in the chain, including its root cause: consumer demand. We’re stopping people from wanting to buy horn in the first place, and gaining insights to help lock up the criminals involved. And we always make sure that our funding is used wisely and makes the biggest impact possible on rhinos.

We know we can’t achieve any of this alone. We need rhino supporters like you to join us.

Can we count on your vote?

One thought on “Vote Save the Rhino”