You are here: Home » News » The ultimate rhino costume challenge 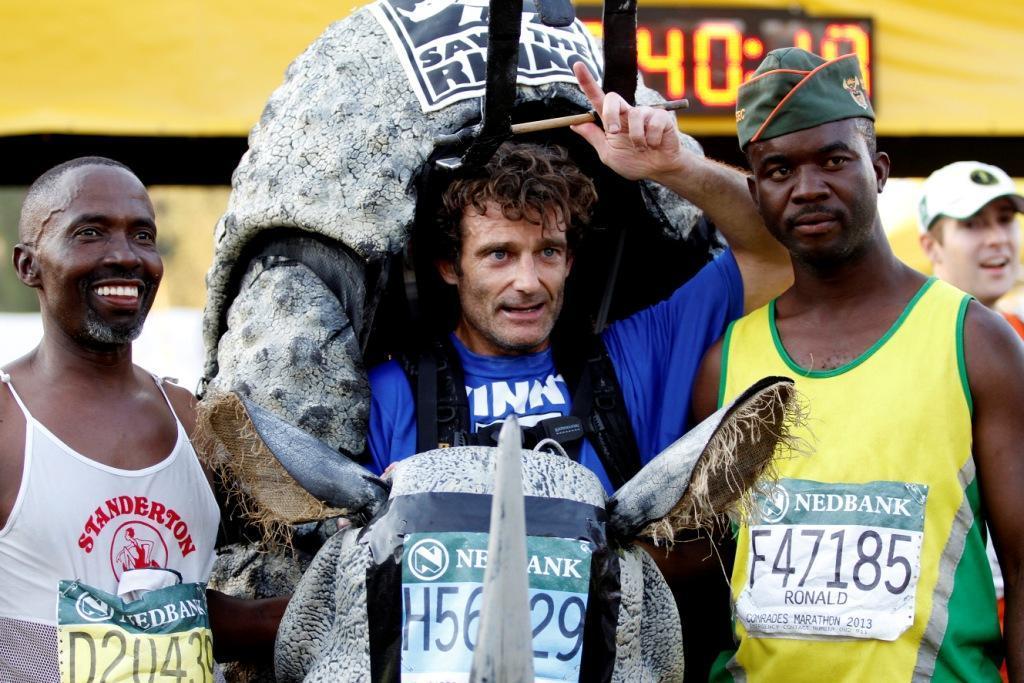 On Sunday 2 June 2013, Vinny accomplished the extraordinary – completing the 87km Comrades marathon in rhino costume in an incredible 10:38:02. This was an hour faster than he anticipated and way under the 12 hour cut off time.

Vinny finished 4,045th out of a field of approx 14,000. He said that support from fellow runners and spectators carried him through the race.

Commenting on the race, Vinny said

“At the beginning of the race I was joined by four African runners and they ran with me all the way. The group grew to about eight as we went along and they stopped when I stopped and they ran when I ran. The support was incredible; I was just sorry I couldn’t wave to them because I had to hold the head.”

As for running in the hot, humid and windy conditions, Vinny said it was an incredibly difficult race.

“It was so hot and I just kept on taking water. The start was hardest as it all uphill but the longer I got into the race it flattened out and I was able to pick up the pace a bit.”

Vinny said he as a bit tender in places due to the chaffing but he’d be fine.

“I probably need a week to recover,”

Congratulations Vinny, and a huge thank you from Save the Rhino!

Charity runner Vincent O’Neill, who will attempt to become the first person to complete the Comrades Marathon In a rhino costume solo, suffered a setback yesterday when his possessions were stolen at the Comrades Expo being held at the ICC exhibition Centre in Durban.

O’Neill’s red backpack was swiped as he gave a media interview at the ASICS stand at about 12.30pm. Sharp work from security officials at the Expo led to the recovery of the backpack in a toilet at the expo but his iPhone; iPad; laptop and 200 pounds was missing. He recovered his wallet and passport however.

It is the first time that the UK resident competes in South Africa and the theft took place just a day after he arrived in the country.

Yet despite the setback O’Neill, said he was committed to finishing the race and to raise as much money as possible for his charity Save the Rhino International, which raises money to fight rhino poaching.

“I was a bit devastated by the theft but I do understand that these things can happen anywhere in the world. My goal though remains the ultimate human race and pushing myself to the limit.

“My bank cards seem in order but I have cancelled them as a precaution. I run my own business and I’m afraid I have lost much of my work material.”

O’Neill appealed to anyone who could assist police to recover the devices and he has reported the theft to both the Comrades Marathon Association and the Berea police station.

So you think running a marathon is a challenge? Think again…

How about running a marathon in a 8kg, hot, sweaty, rhino costume? No this still doesn’t sound tough enough…..

So how about running 87km… uphill… in a rhino costume… and with a cut off time of 12 hours. Now that really is a challenge!

This is what our fantastic rhino supporter Vincent O’Neill, will be doing on Sunday 2 June, as he attempts to be the first ever runner to complete an ultra marathon in rhino costume. Vinny will be racing in South Africa’s legendary Comrades marathon, an 87km course from Durban to Pietermaritzburg.

To sponsor Vinny in his ultimate test of endurance, please visit http://uk.virginmoneygiving.com/VinnyComrades2013

The Comrades course alternates each year, between an ‘up’ and a ‘down’ year. Vinny has selected the extra challenge of running on an ‘up’ year where the course is predominantly uphill. For a small consolation, the ‘up’ year is 2-3km shorter than the ‘down’ year.

Vinny also has just 12 hours to complete the Comrades course, at which point the race organisers close the finish line. He also has to reach a number of cut off points along the route, or be forced to retire from the race.

Vinny is currently the fastest marathon rhino costume runner, having completed the 2012 Virgin London marathon in an impressive 4.17.27. Without the rhino costume, Vinny has a marathon personal best of 2:53:54. Running in the rhino costume increased his time by 49% showing the enormity of the challenge. Vincent has just 12 hours to complete the Comrades course, at which point the race organisers close the finish line.

Vinny has supported Save the Rhino since 2005, when he completed a team rhino-costume challenge with a relay run-swim-cycle from London to Paris. He has also completed several Virgin London marathons to raise money for Save the Rhino. This year, Vinny features in the rhino costume for a promotional film for ASICS’ ‘Better Your Best’ campaign http://www.youtube.com/watch?v=GjVD-qR7Ab4

It’s not the first time one of our rhino costumes has been to South Africa. In 2010, two teams of runners completed the Comrades marathon by relaying rhino costumes along the course. In 2010, when the rhino poaching crisis had just started, 333 rhinos were killed during the whole year: that was bad enough. Now in 2013, over 350 rhinos have been killed in the first five months of this year.

Vinny says: “Rhino poaching isn’t just South Africa’s problem – we care all across the world. Running the Comrades in rhino is my way of raising awareness and funds for rhino protection efforts.”

Cathy Dean, Director of Save the Rhino, added

s “We need more heroes like Vinny. The cash they raise provides vital support for anti-poaching units in Hluhluwe-iMfolozi Park and other key rhino areas.”

To sponsor Vinny in his ultimate test of endurance, please visit http://uk.virginmoneygiving.com/VinnyComrades2013

Vinny, you are an inspiration to us all! Good luck and we’ll be following your progress on the day.