You are here: Home » News » Taking the ‘birthday’ cake 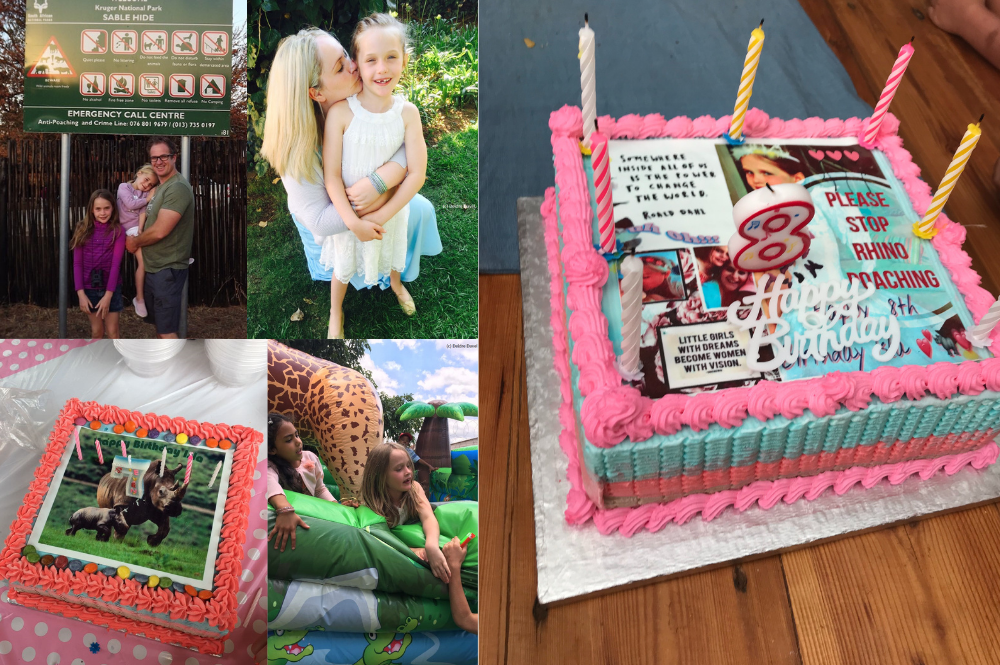 Birthday celebrations are great. You get to be surrounded by your friends and family, and generally, there’s cake and presents. But they can be so much more. Many of our supporters use their birthday as an opportunity to help save rhinos.

In 2019, 9-year-old Isla from South Africa wrote all about why she has been asking for donations to Save the Rhino International instead of presents for her birthday since she turned six. To date she has raised £880 for rhino conservation.

I remember the first rhino calf I ever saw. It was so tiny; it still hadn’t properly found its feet. Because I had spotted her, the ranger let me name her. I named her Riley Rhino.

Later that afternoon the ranger told me that many calves die because poachers kill their mothers for their horns. This made me cry a lot because earlier that year my mother was in intensive care for several months. I wasn’t able to see her much and did not know what would happen. I have never been more scared. It was the worst feeling in the world.

I couldn’t imagine what happens to a helpless rhino calf if its mother gets poached and how lost they would feel. So, I decided there and then that I was going to help save rhinos the best way that I could.

Since my 6th birthday, I have asked my school friends to donate to Save the Rhino International instead of buying me presents. My mum uses a JustGiving online fundraising page to collect donations. It’s easy! My friends just click the link and they can donate. This year I will be turning 10. To help me raise more than ever, my mum will be asking businesses to match or double whatever we kids donate.

In the future, I want to be a wildlife vet because I love all wild animals. I often visit our national parks where I get to talk to rangers about poaching and the amazing work that they do to protect the wildlife. Recently, I have been giving speeches at schools to get other kids to think about what they want the future to look like and realise we can do something. We don’t have to sit back and expect the adults to do this. If we ourselves don’t start doing something we could lose not just rhinos, but other endangered species too.

My family call me the Rhino Warrior, I like that name. All I want to do is to educate others about poaching. I plan on being a Rhino Warrior for the rest of my life.

Want to raise funds for rhinos for your birthday?

Whether it’s a wedding, birthday or baby shower, your big day can make a huge difference. So why not be the person who really takes the cake and do something incredible for your special day? Find out more about how to Fundraise for Rhinos.

One thought on “Taking the ‘birthday’ cake”