You are here: Home » News » Saving rhinos – Why it matters, by The Rogue Gentlemen 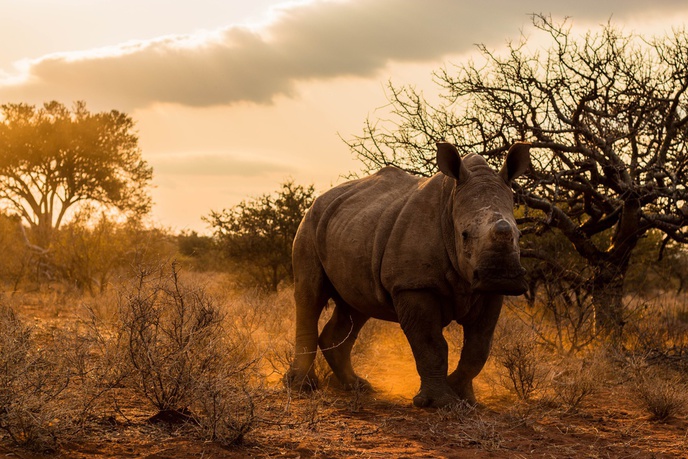 I’ve spent the last couple of months cutting, pasting, clipping, snipping, tucking and adjusting whilst having my brain bamboozled,  exploded, imploded and turned upside down at just how little I knew about rhino conservation. As you may have guessed from that intro I’ve been involved in making some short films for Save the Rhino and they’ve now asked me to tell you a little bit about it.

So…  As you already know I make videos, though along the way I am helped by my two very good friends Simon and Nigel. Simon helps with the filming, Nigel provides the entertainment in front of the camera (along with some other friends, you know who you are!) and I put it all together to form a coherent narrative. Collectively we’re known as ‘The Rogue Gentlemen’ and, in a shameless plug, you can find us over on our YouTube Channel. Our so-called Rhino Journey started about 18 months ago, when we made a little stop motion film for our channel. The video starred a paper rhino named ‘Yudianto’ and revolved around problems facing the rhino population and why these problems exist. It was at this point we came across Save the Rhino International and the work they do.

Why rhinos though? I suppose the thing is, rhinos aren’t necessarily seen as cute, definitely not fluffy, and something you probably wouldn’t want to cuddle. Raising support for rhinos is already challenging because unlike other animals, how do you make rhinos appeal based on their appearance? In my experience, a lot of campaigns to focus on cuteness, but that’s not the most important reason to save a species. Rhinos, however, are often described as peculiar, strong, funny or lumbering creatures, and we think that makes them appealing in their own little – or rather large – way. Even more importantly, you just have to take one look at the numbers of rhino left on this earth to appreciate the threat they face and the fact that, unfortunately, their demise is due to us, the human race. It was these points that drew us to rhinos and to Save the Rhino International.

Anyway, back to our original video. It was well received by family, friends and viewers, even ‘retweeted’ by Save the Rhino; was a huge deal for us! However unless you keep talking, things get easily forgotten and we wanted to make sure this didn’t happen. So we decided to make another rhino video and tweeted the Save the Rhino team to find out if there was anything specific we could make the subject of our film. It was at this point that the charity said (in summary): ‘Would you make and edit four films for us, telling people who we are, what we do and how we do it, whilst using footage we filmed in Africa at the beginning of the year?’. So we said (in summary), ‘yes!’

We approached these videos as we would any film we’d make. Keep it simple, keep it engaging and keep it personable and relatable. What really hit us whilst making these videos is how little we actually knew about the horn trade and how deep, dark and personal it is. I hope that when you watch our videos you’ll appreciate, even more, the hard work done by Save the Rhino and its volunteers, and that you’ll begin to understand the larger picture surrounding the horn trade (we’re still only scratching the surface and we’ve been researching it for months!).

‘Get people talking’ – that was always the message that Save the Rhino wanted to convey. It became clear to us that this charity is more than raising money or sharing a post – though both are important, and they’ll love you forever if you volunteer to put on a rhino costume and run around the streets of London one day a year for the marathon! What they want to do is inspire, engage and involve anyone who takes interest in their work. They are very much a people’s charity – so make sure you go and say hello!

You’ll notice reading this I haven’t really told you why rhinos should be saved. In all honesty it’s because I don’t want to ruin the videos for you, but what I will say is this. The selling of rhino horn affects YOU. Whether that’s because you hate seeing a picture of dead rhino with its horn hacked off on the internet, or you’re fed up with drug dealers lurking on street corners.

So what are you waiting for? Get watching and more importantly… Get talking!