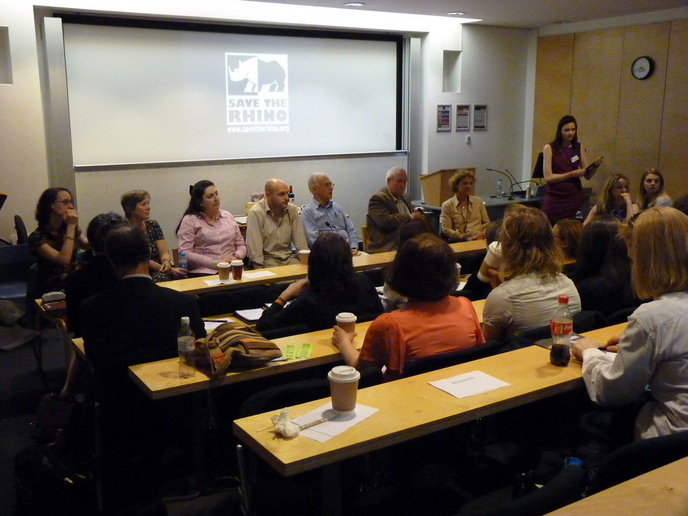 With a diverse line up of speakers from all over the world, this year’s Rhino Mayday event was certainly one of the most informative and interesting so far. From the challenges of expanding rhino range habitat in Kenya, to the conspiracy in the UK rhino horn antiques trade, to the plight of the Sumatran rhino, the day provided an opportunity to learn more about rhinos and debate some of the controversial topics surrounding the species.

We would like to say a big thank you to all of this year’s speakers, those of you who attended the event, and the UCL Grant Museum of Zoology for kindly hosting the day. We would love to hear any feedback you had on Rhino Mayday – please comment at the bottom of the page.

Please see below for a summary of the speaker’s presentations.

This year’s Rhino Mayday 2013 organised by SRI and hosted by the Grant Museum of Zoology at University College London on May the 1st had an eclectic selection of speakers. The sun was even shining which meant that all the discussions and dates could be continued outside in the courtyard. For those who couldn’t make it, here’s a round up of each of the presentations we heard on the day. If you weren’t there on the day it would be great to get your thoughts and comments on any of the topics discussed.

Michael gave an informative first hand account from the field, describing the challenges of establishing new habitat for rhino in the Borana Conservancy, Kenya. The adjacent Lewa Wildlife Conservancy has now reached ecological capacity for its rhino, and Borana provides the perfectly placed solution for the progressive expansion of rhinos habitat. But with the increasing risk of poaching, the cost of looking after rhinos is becoming ever more expensive and challenging. Borana has been busy preparing for its new rhino population by training its field staff, engaging with the surrounding communities and building appropriate fencing and ranger posts.

Joanne gave a unique insight into the role of a documentary producer, filming her most challenging animal so far – the elusive and dangerous black rhino. She presented clips from the recent ‘Flight of the rhino documentary’ which included heartbreaking footage of a poached rhino and her orphaned calf. Jo explained the challenges of deciding how much shocking imagery to include in the documentary and getting the balance between factual information and a story that would catch the audiences’ attention.

Joanne was the producer for the captivating documentary ‘Flight of the rhino’, which was aired in the UK on Saturday 16th February 2013 at 8.30pm on BBC2. You can find out more about the documentary by clicking here.

Flight of the rhino was filmed in Hluhluwe-iMfolozi Park, you can read more about the programme that SRI supports here.

Kate and Paul are fresh from their most recent visit to North Luangwa, Zambia, where they have provided an incredibly important role in the redevelopment of North Luangwa’s Environmental Education programme. They talked us through the many aspects of the programme – named Lolesha Luangwa (Look After Luangwa), including an Education Officer visiting every school, the annual Conservation Celebration Day and the development of a new school environmental activity book. They also talked about how the programme will be monitored and evaluated.

Abigail gave an informative update on the most recent CITES meeting (CoP16) in Bangkok on March 2013. She explained the role of CITES in monitoring the trade in endangered species, and the importance of ensuring that the trade in live rhinos and trophy mounts is adequately monitored. Several hot topics arose for at the meeting, including a proposal by Kenya to implement a zero quota on hunting trophies.

Karen has had no involvement in conservation but has been a keen supporter over the years. Karen has worked in two of the UK’s leading auction houses and brought a wealth of knowledge on the relatively unknown subject of the rhino horn antiques trade in the UK. She gave examples of recently traded antique rhino products and expressed her concern over the lack of control and monitoring of antiques made from rhino horn. With rhino horn products fetching rapidly higher prices at auction, is there a connection with the current rhino poaching crisis?

John gave a fascinating talk on the severely endangered Sumatran rhino which now numbers less than 100 individuals. His presentation included his theories on why the Sumatran rhino population has declined to such low numbers, including reproductive peculiarities of the species, the inability of governments to make bold decisions, and the Allee effect, which is experienced when animal populations decline to such low numbers, and death rate exceeds birth rate even in the absence of poaching.

What we learned on the day