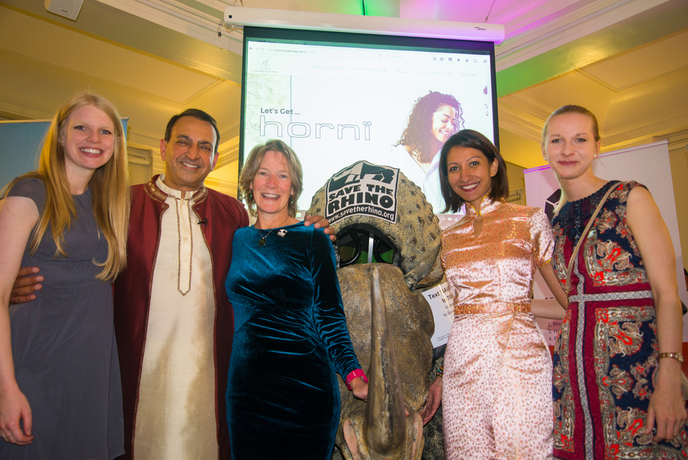 27th April 2017 (London) – hornï ™ is a premium underwear and clothing brand launching at London Zoo on 27th April 2017, at an exclusive, invite-only event – with a mission to support Global Rhino Conservation by “raising eyebrows… raising awareness”.

At the launch event held at the London Zoo on Thursday 27 April, Save the Rhino’s CEO Cathy Dean talked about the key similarities between hornï’s approach to making underwear and Save the Rhino’s take on the rhino conservation.

“It’s all about doing things properly. Whether it’s about gussets or gutters, fabric or poachers’ fabrications and getting the intel that leads you to the culprits: rhino conservation – just like underwear design – is all about attention to detail, getting the basics right.”

Cathy finished her brief talk on a very entertaining, yet quite accurate note. As she confessed, “rangers are always telling us they want decent socks; I’m sure they’d tell us they want great underwear too if they were less embarrassed.”

The hornï launch collection offers 3 styles of men’s underwear; a Boxer brief, Hipster trunk and Classic brief in solid and pattern designs, as well as T-shirts in black and white.  There is also a special, limited edition, Ladies’s Boxer Shorts as a prelude to launching a full line of ladies’ silhouettes by the end of 2017. The brand is starting out largely focusing on underwear and aims to expand into other types of garments and accessories as the company grows.

All the production, materials, and packaging come from manufacturing companies that have the highest level of international-certification for eco-friendly materials and sustainable development practices.

Background: The initial concept for the brand began in 2008, when Founder, Riz Khan, sketched a simple doodle representing a horn shape. Having covered stories of rhino poaching in Africa as an international journalist, he contemplated creating an underwear brand called hornï (an anagram of ‘rhino’) which could support global rhino conservation. Khan specifically spelled it with an “i” at the end rather than a “y” – to make it memorable but not offensive. The idea but remained on the sidelines of Khan’s main career at the time, hosting the flagship news and current affairs interview show on Al Jazeera English, where he was a Founding Director, following a successful on-screen career at CNN and the BBC. In early 2016, bringing the brand to market became his main focus, as he designed the look and feel of the underwear, while also engaging global rhino conservation groups as potential partners.