You are here: Home » News » Help Save the Rhino win £1,000 by voting in JustGiving’s Charity of the Year Awards 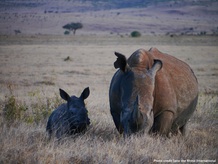 You can vote for us in four easy steps:

3)      Enter ‘Save the Rhino International’ as the cause

Voting closes at midnight (GMT) on Sunday 23rd August 2015.The charity with the most votes from the general public will receive £1,000.

Rhino poaching has escalated with record numbers of rhino being killed across Africa for their horn. 1,215 rhinos were killed in South Africa alone in 2014, with no sign of a slowdown, due to the demand for rhino horn in East Asia. Poaching of rhinos for their horns is the biggest threat to the rhino’s survival. At the current rate of poaching, rhinos could be extinct in the wild in 11 years.

Your vote can help our work to save rhinos by protecting all five rhino species in Africa and Asia and supporting the communities that share their habitat. Please vote here and share with your family and friends to increase our chance of winning. Every vote counts! Thank you for your support.