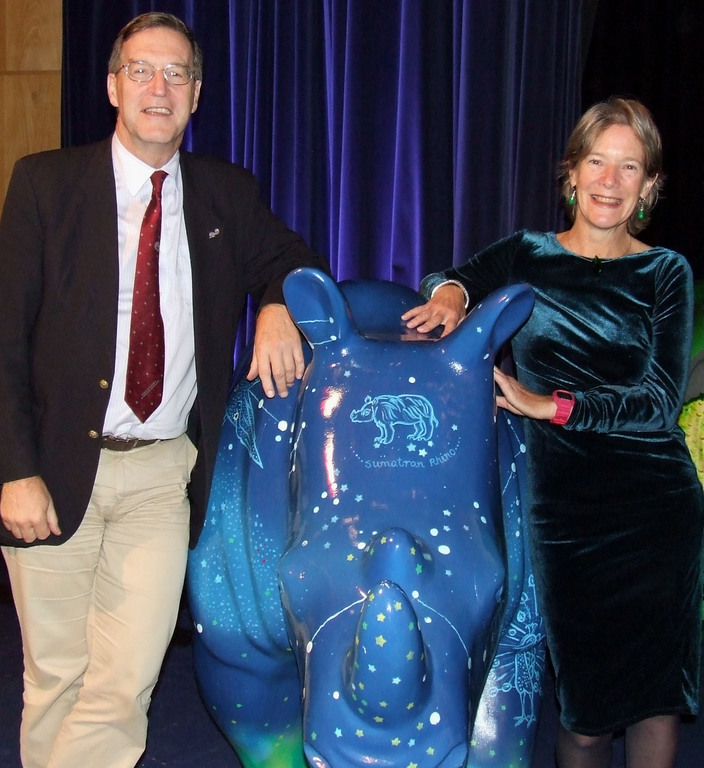 The Great Big Rhino Project has made crucial donations of cash to wildlife conservation on two continents. The Project, run by Paignton Zoo Environmental Park, is to give £60,000 to support work in Africa and South East Asia.

In 2016 a free public art trail of 40 life-size painted rhinos was dotted around Exeter and the English Riviera. Thousands of people spent the summer searching out the dazzling artworks. This was followed in November by a grand charity auction – held at the Riviera International Conference Centre in Torquay – when 39 of the rhinos were sold in aid of rhino conservation. The auction raised a remarkable £123,000.

Now, the Project is to donate a total of £60,000 to conservation causes. In 2013, Paignton Zoo’s previous venture into public art, the Great Gorillas Project, donated a total of £32,000.

Paignton Zoo Executive Director Simon Tonge said: “We’d like to thank all our partners, artists and sponsors, everyone who followed the trail so enthusiastically and everyone who attended the auction. The final result is truly amazing!”

One donation of £30,000 will go to Save the Rhino International for their work with Javan and Sumatran rhinos.

The donation will directly support work in two areas: the Sumatran Rhino Sanctuary and the Javan Rhino Study and Conservation Area, both in Indonesia. Money from The Great Big Rhino Project will help expand the Sumatran Rhino Sanctuary, doubling its capacity for holding and breeding rare Sumatran rhinos. Meanwhile, the Javan Rhino Study and Conservation Area will use its money to tackle invasive plant species like the Arenga palm that are threatening rhino food sources and habitat.

Cathy Dean, Director of Save the Rhino International, said: “I would like to say a huge thank you to everyone at Paignton Zoo, all the auction bidders, artists and sponsors who have so generously helped raise such an incredible amount for rhino conservation. We really value your amazing support for Javan and Sumatran rhinos.”

A second donation of £30,000 will be used by Paignton Zoo to boost the conservation of black rhinos through the Whitley Wildlife Conservation Trust’s Dambari field station in Zimbabwe.

Simon Tonge: “The funds will go towards supporting rhino conservation in the Matopos National Park in south west Zimbabwe. The money will support a researcher studying the use of habitat by white rhino; help expand the camera trap survey of rhino, information from which informs population management and security strategies; investigate the feasibility of a Radio Frequency Identification System for remote monitoring of rhino and purchase the equipment if it proves feasible; dehorning and ear notching operations; and veterinary responses to rhino injuries, snare wounds and so on. So the money raised by our rhino sculptures will be really well used.”

Paignton Zoo is a member of the British & Irish Association of Zoos & Aquariums (BIAZA).