You are here: Home » News » Good luck to our rhino heroes in the Virgin Money London Marathon! 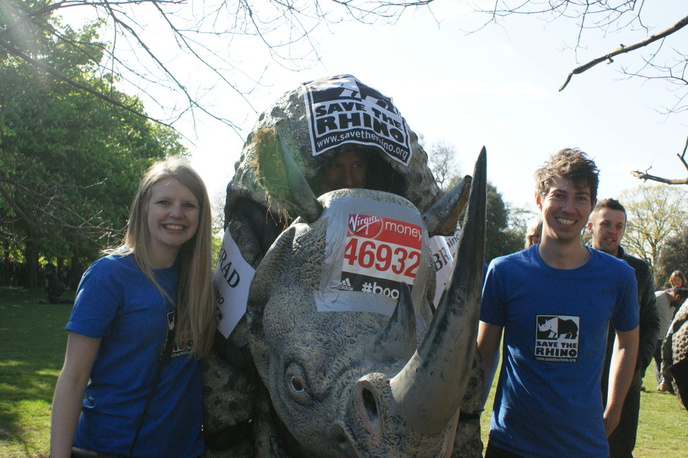 On Sunday 26 April 2015, 59 rhino heroes will be running 26 miles across central London in this year’s Virgin Money London Marathon, the biggest annual fundraising event on the planet. Beginning at Greenwich Park, the marathon route runs past world-famous landmarks such as the Houses of Parliament and Buckingham Palace before finishing by St James’s Park, flanked the whole way by roaring crowds of well-wishers.

Save the Rhino’s iconic rhino costumes will be out in force at this year’s event, with 17 runners taking on the challenge of completing the course in rhino regalia. The costumes weigh around 10kg and add an extra challenge to the already incredible feat of completing the marathon. Our rhino costumes have been part of the London Marathon every year since 1992, and are now an iconic emblem of the event. Those running in a costume always find themselves transformed into celebrities for the day, and can count on getting the biggest cheers of all from the crowds. Look out in particular for runner Paul Cuddeford, who will be completing his 10th marathon in rhino costume.

Many of the runners on this year’s team have particularly personal reasons for wanting to raise money for rhinos. As Tyroan Denny says, “As a South African, I’ve grown up with safaris and the Big Five. It’s definitely something that I want my kids and grandkids to see, and it’s an issue that touches my heart.” Wherever our runners are from, all are linked by a commitment to saving this unique and fascinating animal from extinction.

The London Marathon is the single biggest fundraising event of the year for Save the Rhino. This year, the team are aiming to raise over £100,000 to provide urgently needed support to rhino conservation programmes in Africa and Asia. As well as setting up fundraising pages and asking friends and family for sponsorship, many of this year’s runners have gone the extra mile to hold dozens of fundraising events, from bring-and-buy sales to black-tie balls. Bianca Nicholson and Claire Branagh have spent many months representing rhinos at their local market in Mallorca, Spain, raising funds while bedecked in a full rhino costume. As Claire says, “It’s certainly been a journey, but very satisfying. There’s a great sense of satisfaction now that we’ve now achieved our funding goals, and it’s been great fun. We’ve got our kids involved in everything we’ve done, and they’ve been a fantastic help. They’ve loved it, and are looking forward to coming with us on marathon day.” Thank you to all our marathon runners, and to everyone who has supported their fundraising efforts.

We wish all our runners the best of luck on 26 April. They truly will be heroes for the day, and their efforts will make a huge difference for rhino conservation around the world. Please show your support and donate.

If you’d like to come down and cheer on our rhino runners on the day, check out the route map.