You are here: Home » News » Douglas Adams The Party 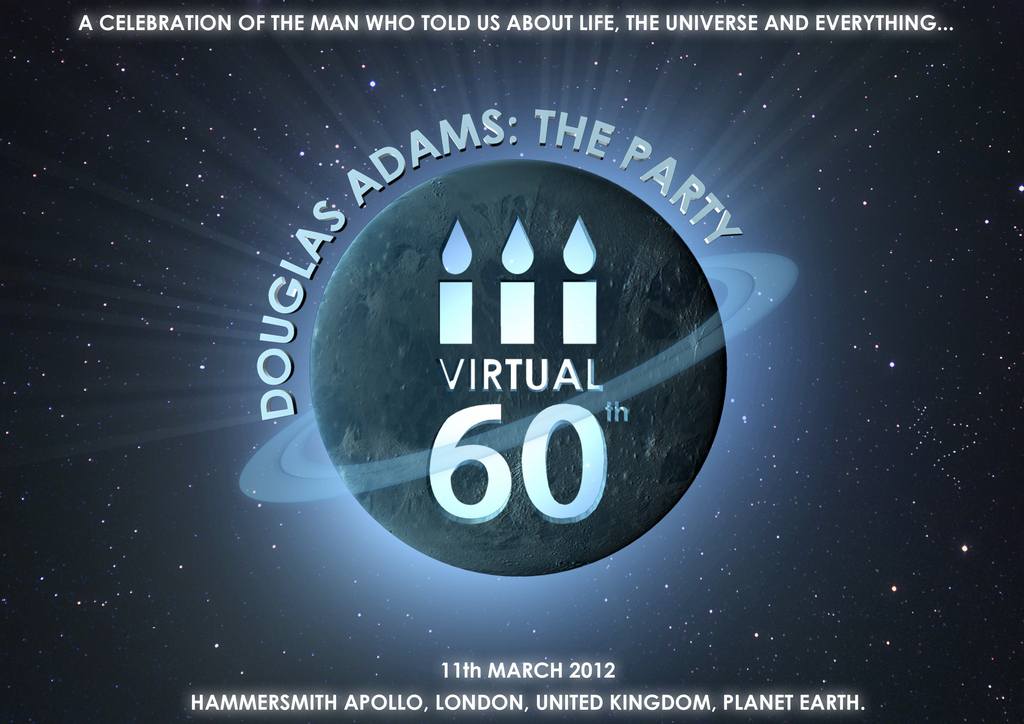 Sunday 11 March saw a mass of towel-adorned Douglas Adams fans congregate for “the second most significant 60th jubilee of the year” (Chortle): Douglas Adams The Party. Save the Rhino and Douglas’s family and friends got together to create a 60th birthday party worthy of the late, great Douglas Adams. Held at the Hammersmith Apollo for 3,500 people, the event captured the essence of an evening spent at one of Douglas’s famous house parties.

Many of Douglas’s friends from the worlds of music, comedy, entertainment and science came together to honour the author, most famous for The Hitchhiker’s Guide To The Galaxy. Stephen Fry was there in virtual form to introduce a film of himself and Mark Carwardine discussing Douglas’s passion for conservation.

Save the Rhino Patron and good friend of Douglas’s, Clive Anderson, did a fantastic job of hosting the evening and interviewing Python star Terry Jones and Sanjeev Bhaskar, where it came out that Douglas had once almost killed most of the Monty Python stars by driving the wrong way down the motorway. Sanjeev also told us that his famous comedy series The Kumars at Number 42 was a nod to the significant Hitchhiker’s reference (42 being the answer to life, the Universe and everything).

Clive hilariously referred to the time he famously offended the Bee Gees to the extent they walked off his talk show after the tribute act The Heebeegeebees (made up of Angus Deayton, Michael Fenton Stevens and Philip Pope) sang Meaningless Songs (In Very High Voices).

Douglas is of course best known for his science fiction writing, in which he explored his curiosity about the Universe and demonstrated his ability to think about the world in completely new ways. Those of Uncaged Monkey fame, Robin Ince, Simon Singh and Helen Keen covered the science for the evening, proving that Tellytubbies are in fact evil and that cats will one day take over the world (as well as how we know the Universe is expanding).

Jon Culshaw stood in for the sadly missing Brian Cox (who had to fly to Australia last minute – “to point at volcanoes” according to Robin Ince), with an excellent impression (complete with pointing). He also demonstrated his versatility by treating us to impressions of Sir Patrick Moore and Tom Baker (for whom Douglas wrote Dr Who episodes).

John Lloyd, creator of Blackadder and QI wrote The Meaning of Liff with Douglas in 1983. He treated us to a few of the top ‘Liffs’ that they created together – a redefinition of a place name with a meaning for which there is no current word. He also read some of the winning entries to the competition we ran in the lead up to the show. The winner was:

PEAKIRK n: One who regularly points out that there are no lavatories on the USS Enterprise

Interspersed throughout the night were various sketches written by Adams in the early years – for the 70s series The Burkiss Way and 1974 Cambridge Footlights, performed as if for a radio recording. Rory McGrath, Will Adams, Martin Smith and Susan Sheridan were amongst the performers demonstrating Douglas’s inventive use of language and wry sense of humour.

The surprise reveal at the end of the night was the band, who last performed together in Douglas’s living room. Introduced by Richard Curtis, the line up included David Gilmour, Robbie McIntosh, Gary Brooker, Jodi Linscott, Paul ‘Wix’ Wickens, Margo Buchanan, Dave Bronze and Paul Bevis.

“When a lean, affecting Gilmour sang Wish you Were Here or Gary Brooker from Procul Harum ended the show with A Whiter Shade of Pale, this really felt like a birthday party to remember” – The Times.

Ending with a heart-warming thanks by Douglas’s family and a film of Douglas walking into the sea overlain by What a Wonderful World, there wasn’t a dry eye in the house, or a person left sitting in their seats.

We’re proud and honoured to have created “one of the greatest events in the Galaxy” (Stephen Fry), with the wonderful friends and family of Douglas Adams. Thank you to everyone who helped make this happen. The Party raised almost £70,000, and we will be making grants to two other charities with which Douglas was closely involved: The Environmental Investigation Agency and the Gorilla Organization.

“In pursuit of the spirit of Adams, the whole evening was a touching tribute to a man whose work is not only loved, but still being adapted anew for television and radio nearly 11 years after his untimely death” – Herald Scotland

“For a brief time it felt like the much-missed wordsmith was indeed here. Particularly at the eyecatching end when the onstage screen showed him strolling naked into the ocean” – London Evening Standard

P.S. The highlight for us of course had to be the troupe of eight tap-dancing rhinos!

Intergalactic? Paranoid? Exterminating? Kamikazi? Or just plain fun? Tell us what you thought of Douglas Adams the Party!

The Times: Stars turn out to say so long and thanks for all the memories

The Herald: A galaxy of real stars, by Carmody Wilson

DavidGilmour.com: A galaxy of hitmakers

25 thoughts on “Douglas Adams The Party”