You are here: Home » News » Celebrating 30 years of rhinos at London Marathon 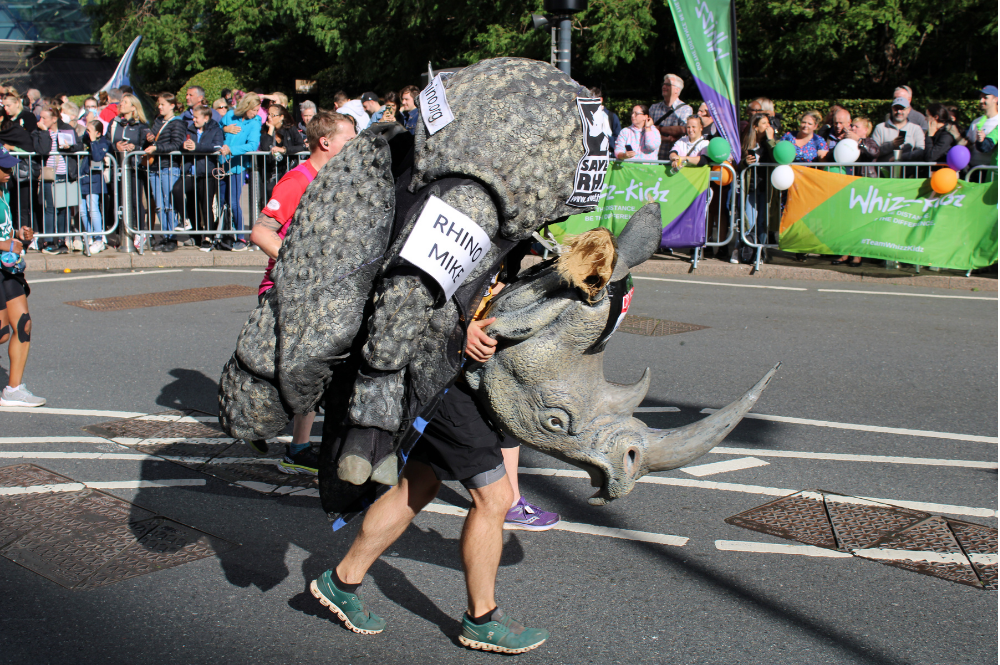 Ahead of tomorrow’s London Marathon, we’d like to say a huge good luck to our incredible runners!

There are 63 rhino runners taking part in the 2022 TCS London Marathon, 12 of whom are running in costume. As usual, our team will be in London to cheer on and support every single one, and we can’t wait to see them all enjoy their victory lap following months of dedicated training and fundraising.

The Marathon is already one of our favourite days of the year, and this year, it’s even more special: it’s the 30th anniversary of our rhinos taking part!

Donate to support our rhino runners as they take on the 2022 London Marathon.

A brief history of the costumes and the London Marathon

Originally created for a play at the Chichester Festival, the costumes were donated to Save the Rhino by British puppet designer William Todd-Jones. Todd became aware of the fundraising efforts of Dave Stirling and Johnny Roberts (our founders) who, while taking part in a ‘Rhino Scramble’ across Africa, witnessed first-hand the severity of the global poaching epidemic. At the time, there were thought to be fewer than 2,400 black rhinos left in the world.

Not ones to shy away from adventure or the unusual when they received the phone call from Todd, Dave and Johnny gladly accepted the donation and challenged him to join them in running the London Marathon – in the 12 kg costume. Realising its potential in raising awareness for rhino conservation at a time when many people were unaware of the existential crisis facing rhinos, Todd accepted the challenge and became the first ever runner to wear the suit in 1992. Of course, that wasn’t enough for Todd, and he decided to run the 26.2 miles in leather brogues… did someone say blisters?

Today, the iconic costume is recognised as one of the city’s favourites, being voted the best marathon costume by readers of Metro, London’s weekday newspaper, and often mentioned by runners and non-runners alike.

Cathy Dean, CEO of Save the Rhino, will be running the London Marathon in costume this year, and can’t wait to be part of the day:

“Every year the London Marathon is a special event for us, and we’re so proud that rhino costumes have featured in each one since 1992. Nothing beats hearing a crowd cheer the rhinos as they charge around the course. It’s our favourite day of the year, and we look forward to many more to come!”

Here are a few facts about our beloved costumes:

Want to join our Rhino Runners for the 2023 London Marathon in April next year (costume or not!)? Apply now.