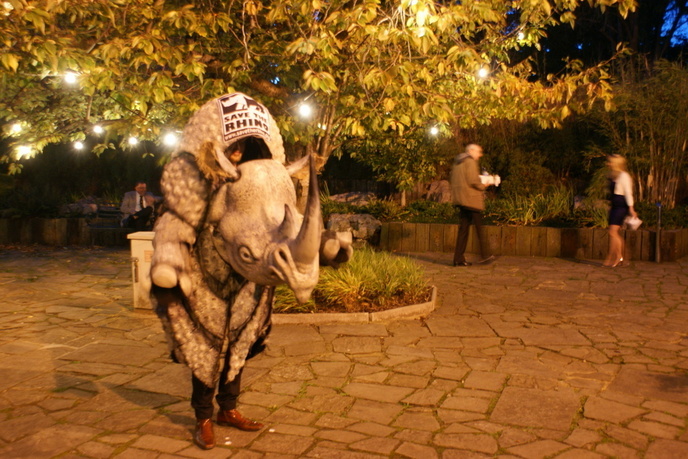 On Tuesday 16 October 200 guests arrived at ZSL London Zoo to be greeted by a rhino costume and pointed towards a house full of reptiles. It’s not quite yet halloween; this was Adventure! Save the Rhino Dinner 2012.

Having enjoyed a cocktail reception at the reptile house of the zoo guests moved on to enjoy a three course dinner with speakers at Save the Rhino’s fourth annual PechaKucha dinner event.

Six brilliant speakers gave their take on the theme of ‘adventure’ using the PechaKucha format, which gives speakers just 20 slides and 20 seconds for each slide to talk about their chosen topic – 20×20.

The evening was compered by Robin Ince, an award winning comedian well known as a science populariser and best known for the BBC Radio 4 series The Infinite Monkey Cage with Prof. Brian Cox and live events such as 9 Lessons and Carols for Godless People.

Cathy Dean Director of Save the Rhino demonstrated the PechaKucha format by bringing everyone up to date on the rhino poaching situation as it stands and Save the Rhino’s work in the upcoming year.

Robert Penn entertained our guests with some stunning photography detailing his adventure around the world by bike. He confessed to not being ‘very adventurous’ but explained that if you are not predisposed to taking risks, you are more likely to succeed in something like an adventure. With the bicycle being the most popular type of transport on the planet, Robert spoke fondly of his encounters with different cultures.

Christina Franco SRI trustee, spoke of her adventures in attempting to become the first solo women to reach the North Pole. Christina explained how she spent years training and obsessing over details, along with the challenges of reducing every ounce of kit. The audience listened in amazement as Christina explained that she burned 9,500 calories per day but could only carry 5-6,000 calories worth of food. Christina’s photos showed the dramatic frozen terrain, with huge slabs of ice and open spaces which she had to swim through. Christina described the adventure as ‘living her dream’.

Jon Culshaw had all the guests laughing with his comical impressions of political figures such as Tony Blair, Gordon Brown, George Bush Barrack Obama. He then went on to give some amazing imitations of celebrities including of David Beckham, Alan Carr and Ozzy Osbourne!

Helen Keen delivered a fantastic presentation about space, detailing how many animals including cats and dogs have been sent in rockets to explore the vast galaxy. Fortunately no rhino has ever been into space, which did lead her to suggest a novel proposition – we could send rhinos to the moon to keep them safe from poachers!

Terry Waite told several interesting anecdotes, including a story of his time whilst taken hostage in the Lebanon. He captivated the audience with his tale of seeing colour in a bunch of flowers, after several years in captivity.

Jeremy Cooke gave an interesting presentation about his recent involvement reporting for the BBC on the translocation of three black rhinos from Port Lympne Wild Animal Park in Kent, to Mkomazi Rhino Sanctuary in Tanzania. He was probably the only person in the world to have first seen a rhino at 35,000ft. He explained the importance of the BBC capturing these powerful images to share with a global audience.

The evening closed with a live auction, raffle and the results of our silent auction, all of which helped to raise a huge amount of money for rhino conservation programmes.

Save the Rhino would like to thank all the many sponsors, donors, volunteers and guests who helped to make the evening a resounding success.

Why not tell us what you thought of the evening below?

One thought on “Adventure! Save the Rhino Dinner 2012”