You are here: Home » News » What young people in Vietnam are saying about our Save the Rhino Vietnam campaign 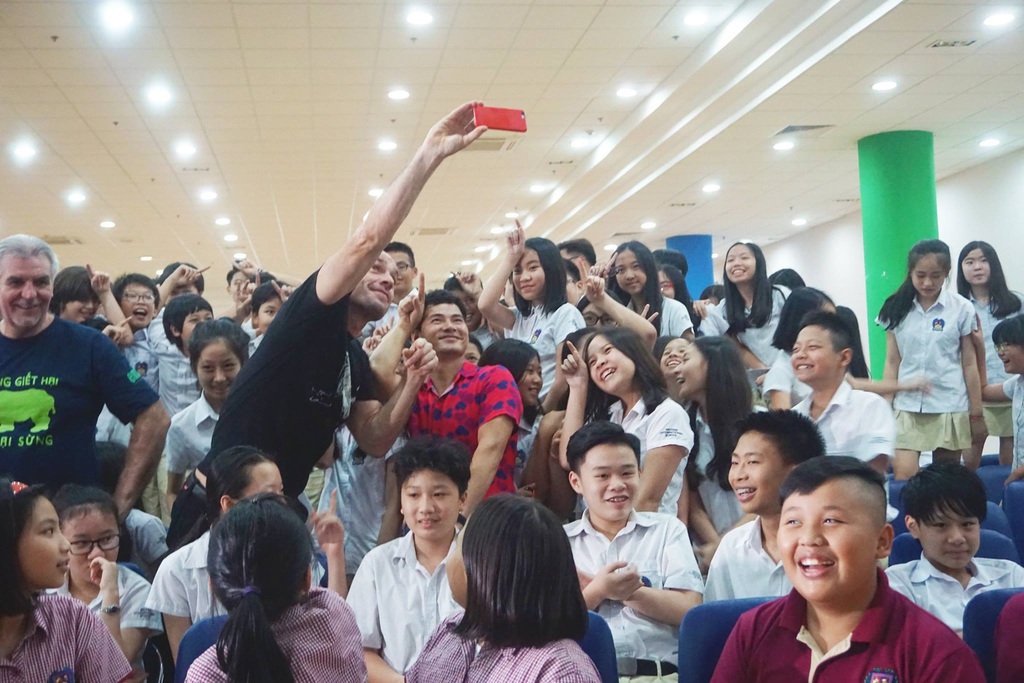 How can you judge the success of an “awareness raising” campaign? Changes in attitude can be difficult to measure and the impact of education needs time to take effect. However, one thing is already clear, and that is that the launch of our Save the Rhino Vietnam Campaign has already recruited a team of organised, dedicated and highly persuasive ambassadors… students at the British International School, Hanoi!

SRI local programme partners, Education for Nature-Vietnam have been working with the school, and many others like them for several years. The Save the Rhino Vietnam campaign is a joint initiative between ENV and SRI, and simply couldn’t happen without the expertise of the ENV team on the ground who fully understand the culture and environment in Viet Nam.

In May 2016 SRI rhino ambassador, Arrow actor Paul Blackthorne touched down in Viet Nam to launch the most high-profile rhino awareness campaign ever conducted in the country. At the British International School, Hanoi, he was joined by Xuan Bac, a top comedian in Viet Nam. The duo gave talks about the demand for rhino horn in the country and how it has led to a poaching crisis threatening the very existence of all five rhino species, and shared the message that rhinos are a vital part of our ecosystem and need protecting.

You can see just how much these students love rhinos here:

Here’s what staff and students said about the day

“I enjoyed the presentation and was excited about Paul Blackthorne but I almost jumped out of my seat when I saw Xuan Bac! After Paul’s presentation, I was not only happy because he’s an Arsenal fan, but I was also happy because he cares. When Xuan Bac was talking, I felt that he was quite right about how if we wanted to protect ourselves, we have to protect the world around us too. After that afternoon, I really wanted to tell someone who bought rhino horns that they are (excuse the language) stupid and that they’re supporting terrorism.” – Gia Phuc

“Yesterday’s presentations from Xuan Bac and Paul Blackthorne were very inspirational. It made me think about how rhinos have gone from nearly 1 million rhinos to just 30,000 now. People have gained a lot of money from this, but killing rhinos and taking their ivory does nothing good. The worst part was that whether or not the rhino is dead, they take the horn. People are being conned to buy rhino horns. I promise to never buy rhino horns and will help spread the word.” – Linh Nhi

“After the presentations, I thought that I must do something about this problem. I can’t go around the world to tell people to stop buying or stop hunting the rhinos. So I decided to post a video on YouTube or post a small video on social media for everyone in the world to see the videos and I hope that the videos will change people’s mind!” – Thai Uyen

You can help us reach more children in Viet Nam and inspire a generation of rhino ambassadors by donating to the campaign here.