You are here: Home » News » Update from the Save the Rhino Vietnam Campaign! 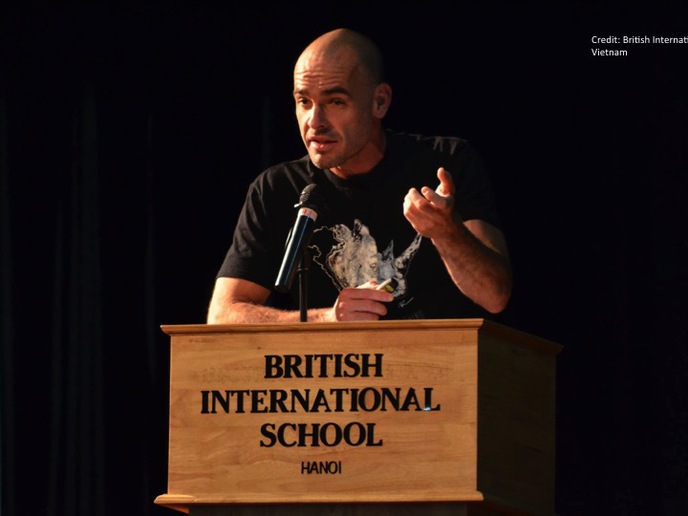 A quick update on the Save the Rhino Vietnam Campaign, as actor and rhino ambassador Paul Blackthorne travels through Vietnam raising awareness of the devastating impact of the rhino horn trade.

Star of TV’s Arrow, Paul Blackthorne, and Arsenal midfielder Aaron Ramsey have been busy spearheading the Save the Rhino Vietnam campaign; spurring a whole host of celebrities and professional sportsmen to show their support for rhino conservation by wearing our fantastic #Savetherhinovietnam campaign T-shirt, featuring an original design by acclaimed artist Rob Prior.

The campaign saw Paul land in Vietnam last week with SRI Deputy Director Susie Offord where, with help from our partners Education for Nature the team are working hard to raise awareness of the rhino horn trade and reduce demand for illegally poached horn which, if we don’t take action, could wipe out all wild living rhinos within just 10 years.

The two-week trip kicked off with a bang at Hanoi’s Thang Long University, where Paul gave a rousing opening speech to over 500 students. Incredibly, following the talk all students in attendance signed a pledge committing to speak out against the use of rhino horn to others. Since then, Paul and the team have been on a non-stop tour, meeting government officials, schools and practitioners of Traditional Chinese Medicine (TCM).

Paul and Susie even traveled an hour north of Hanoi to Nhi Khe village, a place infamous for selling illegal trafficked wildlife products including rhino horn and ivory. Paul went undercover with secret microphones and cameras to expose the trade – look out for more news on his findings soon.

Over the last few days the team have focused on meeting conservationists and volunteers dedicated to combating the illegal wildlife trade and changing the perception that rhino horn is a luxury commodity. The trip is giving SRI an in-depth insight to the challenges conservationists in Vietnam face when raising awareness and changing attitudes. Media interest generated by Paul’s trip has brought this work into the spotlight, and we will continue to support the much-needed work by our partners in Vietnam.

You can support this vital work to reduce the demand for horn by purchasing our limited edition rhinos Tees. Even better, you will be automatically entered into a prize draw which could see you win prized signed T-shirts from the cast of hit show Arrow, Arsenal and Chelsea football teams, and many other top celebrities who share our vision for a world where all five species of rhino can thrive, in the wild, for generations to come.

One thought on “Update from the Save the Rhino Vietnam Campaign!”