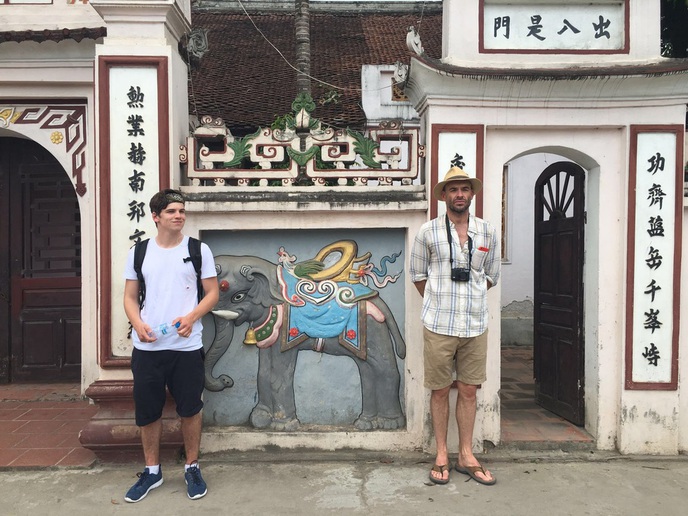 On Friday 20 May 2016, Arrow and Lagaan star, and Save the Rhino International ambassador, Paul Blackthorne, touched down in Viet Nam to launch one of the biggest environmental awareness campaigns the country has ever seen. The #SavetheRhinoVietnam campaign aims to reduce skyrocketing demand for rhino horn amongst the nation’s wealthy elite, a demand that is pushing the rate of rhino poaching to crisis levels.

Viet Nam is often described as one of the largest consumer markets for illegally poached and trafficked rhino horn but, within the country itself, few consumers are aware that the new trend for rhino horn consumption is hastening the decline of one of the earth’s most iconic species, or that the trade fuels organised crime syndicates involved in people trafficking, narcotics and international terrorism too.

During the course of the two-week visit Paul and his nephew, YouTube vlogger Jake Dudman, joined Save the Rhino International’s Deputy Director, Susie Offord, and our local partners Education for Nature-Vietnam (ENV) to travel around the country spreading our conservation message. Along the way, they met politicians, business leaders, law enforcement officers, those with first-hand knowledge of the illicit trade and the next generation of campaigners who want to see it come to an end.

After generating a huge amount of media attention with a range of Vietnamese celebrities getting involved with and endorsing the campaign, #SavetheRhinoVietnam is just getting started with many more activities planned over the coming year to ensure rhino conservation stays in the public eye. Here’s a round-up of our #SavetheRhinoVietnam launch:

After a 13-hour flight, Paul and Susie landed in Viet Nam on Thursday 19 May. A good night’s sleep later, the team were up early, and possibly a little jet-lagged, to kick the campaign straight into gear.

The team’s first meeting was at the British Embassy, which helps support work tacking the illegal wildlife trade, and the UK’s Ambassador to Viet Nam; Giles Lever.

The campaign’s first press conference took place on Friday 20 May, organised by the ENV team. SRI’s strategy is to work with partners based on the ground who are best placed to understand their local communities. In Viet Nam, this is no exception. By working with ENV, the #SavetheRhinoVietnam campaign has been designed by Vietnamese people, for Vietnamese people, and garnered huge press attention in international and the South East Asian media with great rolling coverage throughout the trip.

The main focus of this campaign is reaching young people, and encouraging them to raise awareness that Viet Nam is a key driver of the illicit rhino horn market. In turn, this new generation of conservationists can inspire their friends, their colleagues, and their families – and help turn the tide against poaching.

Later in the day, we were delighted to have the opportunity to address and speak with students at Thang Long University, and hear their thoughts about how rhino horn can become an unfashionable fad of the past.

Paul also visited students at the British International School in Hanoi, who shared their hopes for rhino conservation during a lively talk with top Vietnamese comedian Xuan Bac.

Over the weekend Paul and the team set out to discover how and where rhino horn is being sold – was it easy to buy rhino horn or was the black market firmly underground? Viet Nam’s Nhi Khe village, situated about an hour north of Hanoi, is notorious for openly selling ivory products to holidaymakers. The village is also known for being a hotspot for rhino horn. Paul, Susie and team went undercover, posing as tourists hunting for a bargain, whilst kitted out with secret microphones and cameras.

There was a vast array of ivory on sale but, due to its huge value, vendors were cautious about displaying rhino horn. Shockingly, with just a little probing, the team almost had a deal in place to buy a horn. According to the vendor, the horn would be delivered at another location – if payment was guaranteed. Two shops showed the team photos of the rhino horn they had for sale and one of these traders claimed that if we placed an order one day, they would be able to deliver it straight to us in Hanoi within 24 hours. Incredibly, all the shopkeepers SRI spoke to knew they were breaking the law but they weren’t worried about getting caught, leading to doubts that the Vietnamese authorities are taking the trade seriously enough.

Check out Jake’s undercover film of him and Paul on their rhino horn mission.

As the gravity of what they’d just seen sank in, the team then went to meet a group of Traditional Chinese Medicine practitioners. Many people still associate Traditional Chinese Medicine (TCM) as the main reason behind rhino poaching. Whilst it is certainly a factor, the demand for rhino horn is a complex question. In an eye-opening hour interviewing the TCM practitioners, Paul and Susie met Mr Hong, Chairman of a group of TCM doctors, who has spoken out against using rhino horn and, due to his respected position, is influencing others too.

The team met officials from Viet Nam’s Ministry of Natural Resources and Environment, which is tasked with enforcing the country’s regulations on the illegal wildlife trade. The team were hugely committed but face many familiar challenges, such as budget constraints, team capacity, and how they can work better with other government departments.

International attention has already helped propel the Vietnamese government into action, with substantial legislative changes already taking place. In July 2016 new penal codes will come into effect, including non-native species for the first time. The hope is that the pace of prosecutions, and the severity of resulting sentences, will increase. Currently, very few cases lead to convictions and unless a “zero-tolerance” line is taken, poachers and traffickers will continue to exploit weaknesses in the system.

Importantly, there is a precedent for successful consumer-awareness campaigns and government lobbying. Due to the efforts of conservationists and cohesive government responses, demand in neighbouring Japan, South Korea and Taiwan is believed to be non-existent. Over the coming months the campaign will continue to engage key officials in Viet Nam.

No visit to Viet Nam would be complete without taking the time to see some of the country’s spectacular scenery and biodiversity. Although Viet Nam’s indigenous Javan rhino population was declared extinct in 2011, the team made the most of the biodiversity offered by Cuc Phuong National Park, and saw a fantastic range of wildlife including pangolins, binturongs, civets, Delacour langurs, gibbons and leopard cats.

Back to the UK

The SRI team landed back in London at Rhino HQ to some great news. During the trip, Paul’s limited edition #SavetheRhinoVietnam t-shirts were on sale, raising vital funds for SRI’s work. Celebrities and supporters in the UK and USA rallied behind the campaign, with the hashtag #savetherhinovietnam trending on social media.

We are delighted to report that we sold 1,628 t-shirts, raising $21,884.18 in total from our  Thank you to everyone who has supported the campaign so far! You can still donate to support our on-going work in Viet Nam, and help us reach even more people with our conservation message.

Alongside the changes in legislation coming this July, the next CITES Conference of Parties (CoP) takes place in September 2016, in South Africa. CITES is the acronym for “The Convention on International Trade in Endangered Species of Wild Fauna and Flora”; a multilateral treaty that came into force in 1975 to tackle the international wildlife trade.

Held once every three years, it is expected that the CoP’s attention will turn to Viet Nam’s role in the rhino horn trade. SRI will continue to work with partners to lobby the Vietnamese government to take tougher measures to combat rhino horn trafficking, trade and the consumer demand fuelling rhino poaching. Watch this space for more news from CITES, and the Hanoi conference, in early Autumn.