You are here: Home » News » Demand for rhino horn in Vietnam 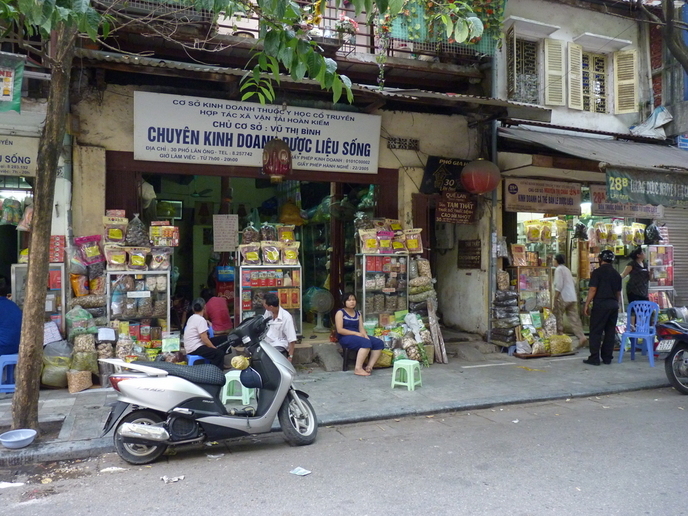 In June I flew to Hanoi in Vietnam to attend a workshop to develop a campaign to reduce the demand for rhino horn in Vietnam. While I was there I also spent time with Education for Nature Vietnam (ENV) to meet the team in person and learn more about their work.

I had been to Vietnam several years before in 2009 but for a holiday so I was interested to see what had changed and also rather than visiting some of its beautiful sites I would be focusing on its relationship and consumption of illegal wildlife, particularly Rhino Horn.

I stayed in the old quarter of Hoan Kiem which is frequented by many tourists. Hanoi is one of those cities that, as a foreigner, you can walk around without being hassled. People are incredibly friendly and welcoming to you and there is quite a relaxed atmosphere. People of all ages sit outside shops socialising in the evening after long days at work.

One of the things that struck me is the lack of any wildlife anywhere. I now live in London, quite a large populated city, but there are many trees, green patches, parks and birds. The only birds I saw in Hanoi were in small cages outside people’s shops looking rather sad for themselves.

Hanoi is famous for its traffic. There are still mopeds everywhere, they still don’t seem to follow any rules and you still take your life into your own hands when crossing the roads. From this perspective, nothing had changed. Once I was able to trust that these moped drivers really weren’t going to hit me, I started to admire their skill at driving and doing about 10 other things at the same time. My memories of Hanoi had been of a drab city but it definitely seems to have a lot more buzz to it now. There are roof top bars, expensive shops and consumerism seems to be firmly established. Vietnam has one of the fastest growing economies in the world and with a population of 91,519,289 Vietnam is now the 13th most populated country in the world.

On Wednesday 19 June  I met with Ms Dung who is the operations director at ENV (see here to read about SRI’s project with ENV) and is in charge of the awareness programme in illegal wildlife trade. She explained more about all of the work they do at ENV and then I was introduced to the rest of their 35 strong team. The team do an absolutely fantastic job and came across as very professional, knowledgeable and welcoming to me, letting me ask as many questions as possible and being very frank about the difficulties they face. Their work includes raising awareness about wildlife crimes to the Vietnamese general public, they manage a wildlife crime hotline, they carry out investigations into wildlife crimes and work with authorities and manage and deliver campaigns in Vietnam. They have a fantastic volunteers programme that includes around 3,800 volunteers all over Vietnam, their volunteers get involved in reporting wildlife crime and awareness raising campaigns.

Photo: Members of the ENV team

ENV have done very successful campaigns in the past on reducing the demand for bear bile in Vietnam. Bear bile is an illegal activity but unfortunately there has been very little law enforcement and so the practise has continued but through the work of ENV this practise has been vastly reduced in Vietnam.

ENV have been working on reducing the demand for rhino horn since 2012. See more about the work that ENV are doing with SRI on their rhino campaign here.

After I was treated to a lovely lunch of pork and noodles and some proper Vietnamese white coffee (which is made with ice and much nicer than normal coffee) I had to say my goodbyes. I then travelled with Tran Tuyet Minh, who is a Wildlife Trade Programme Manager at ENV, via her moped (I am now converted and would love to ride one myself, however it would take years to learn how to drive in Hanoi due to the lack of formal road rules) to Hai Thuong Lan Ong Street which is one of the main streets in Hanoi for TCM shops. Each shop seems to sell the exact same thing as the one next door.

With Ms Minh’s help I was able to go into many of the shops and take photos and ask questions of the shop owners. Rhino horn was not openly being sold in any of these shops (there was however signs for bear bile which is illegal). ENV had previously visited all of these shops and asked if they would place signs saying rhino horn is illegal. About one quarter agreed, however most of the signs were tucked away at the back of the shop. I pretended to be a student that was interested in traditional Chinese medicine and Ms Minh translated my questions for me as none of the TCM owners could speak English.

Photo: Ms Minh from ENV on her moped

Several of the shop owners were suspicious and so wouldn’t let me ask any questions or take photos but many were quite open to talking to me.

They explained that TCM customers mostly want treatment for their general good health a bit like taking vitamin tablets. People don’t generally come in and ask for a specific product, they tell the practitioner what their problem is and they will diagnose what they need. It takes many year to train to become a TCM doctor and they are well respected. Customers tend to choose which TCM shop to go into through a recommendation or they already trust and know the shop, trust is important to their trade. Some of the practitioners have been asked by customers for rhino horn but all denied ever selling it.

Photo: A practitioner slicing up products for Chinese medicine, not rhino horn

On the Friday I attended a workshop organised by Naomi Doak (Traffic Vietnam) and facilitated by PSI who are a global change behaviour agency who specialise in changing people’s behaviour in relation to health issues.The workshop was also attended by members of the Vietnamese government and WWF.

The workshop analysed the two consumer surveys that had been commissioned by WWF and Traffic in Vietnam in 2013. The aim of these surveys was then help  to plan a targeted behaviour change campaign to reduce the demand for rhino horn. The workshop identified three key rhino horn user groups and the steps to running a campaign to change the key user groups behaviour. It also looked at who would be the best type of ambassador for the campaign. Many of the participants in the workshop were Vietnamese nationals who were fighting to stop the illegal wildlife trade. They explained that when growing up as children you were not taught much about wildlife and why it is important to protect it. Therefore, it isn’t something that people consider. Their focus is generally on doing the best for their families.

It was very exciting to able to be involved at this stage in such a great project but there is still a long way to go to make this campaign happen including raising funds for the project. SRI are starting to fundraise for the campaign as we believe it is one of the best ways to tackle rhino poaching occurring throughout Africa and Asia and you can be involved by helping support this project. See more about the work being done on demand reduction here.

I left Hanoi with a mixture of feelings. Hanoi is a fantastic city, full of interesting and friendly people, it is clearly doing well. There is lots of growth and development and people are making a better life for themselves. However, it is also a country that seems to have somehow lost its relationship with wildlife and I can’t help but worry that as more and more people are able to afford rhino horn this will have a negative impact on our rhinos and other wildlife. The demand for wildlife products only seems to be increasing. However, there are positive signs. The young people of Vietnam do seem to be changing and do want to protect wildlife but many species don’t have enough time to wait for several generations before a culture fully changes. The work that ENV, Traffic Vietnam, the Vietnamese government and other organisations around the world, including SRI, do in Vietnam in the next couple of years is going to play a major role in the survival of so many species including our rhinos!

See here for information about what SRI and other organisations are doing in Vietnam.

4 thoughts on “Demand for rhino horn in Vietnam”