You are here: Home » News » Monitoring and protecting Javan and Sumatran rhinos with Rhino Protection Units 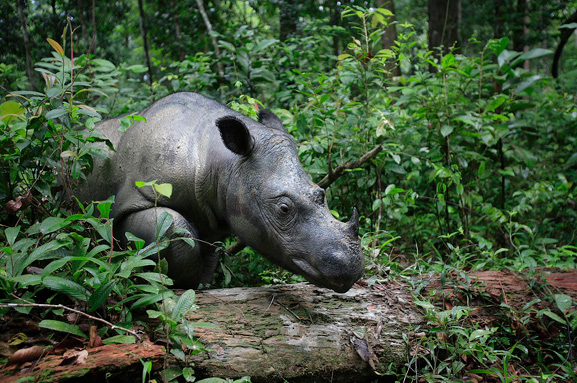 With estimates of only 65-68 Javan rhinos and fewer than 80 Sumatran rhinos left, saving the remaining populations of both species in Indonesia requires serious efforts. Dedicated teams, Rhino Protection Units (RPUs), now work around the clock to keep these rhinos safe and reverse the negative trends that have pushed their futures to the brink.

Intense poaching and habitat loss caused catastrophic declines in the populations of Javan and Sumatran rhinos in the 1970s and 1980s. In response, the RPU programme was set up to boost the protection and management of Indonesia’s rhino-inhabited National Parks (Bukit Barisan Selatan and Way Kambas national parks in southern Sumatra and Ujung Kulon National Park in western Java). For almost 24 years, RPUs have been working diligently to stop poaching and engage local communities.

Of course, RPUs are not only about security; they are also experienced rhino trackers. The small numbers of each species mean that seeing a rhino is very rare, but by logging information such as footprints, wallows and faeces, RPUs monitor population numbers and, as much as possible, rhino behaviour.

The RPU programme has had a great impact on the National Parks and the wildlife within them, with only five rhinos poached since the initiative began. Yet poaching remains a threat, especially for other wildlife.

While rhino protection is one of the top priorities for Rhino Protection Units, their presence benefits many other species. In 2018, RPU patrol teams encountered poached elephants and other mammals, as well as more than 75 instances of illegal activity, including illegal fishing, bird trapping, logging and forest theft. Their extensive patrolling time, considerable knowledge and anti-poaching expertise enable RPUs to spot incidents, assist in documenting evidence and destroy illegal equipment such as snares, bird nets and fishing traps. Furthermore, in 2018, RPUs in Way Kambas and Bukit Barisan Selatan national parks also helped tackle 67 forest fires, which sadly destroyed more than 500 hectares of land before they could be extinguished.

Thanks to your generous donations, we are able to continue the critical work of these Rhino Protection Units, monitoring and protecting Sumatran and Javan rhinos, and other wildlife, for the future.