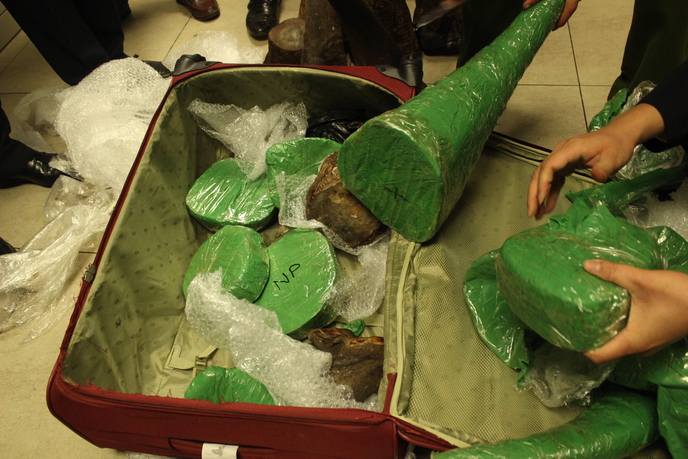 In Harare Magistrates’ Court this week, Zimbabwean national Dumisani Moyo fought against extradition to Botswana, where he is wanted for smuggling rhino horns and then jumping his bail in that case.

We first heard of Moyo in November 2012, when Save the Rhino’s CEO Cathy Dean saw a news report that Moyo had been arrested in Botswana on this case. Cathy sent a link to the article to contacts in Zimbabwe, who explained that they had been watching Moyo for some time, given his contacts with known rhino poachers, then operating particularly in the Midlands and Matobo areas. He was thought to have high-level protection within Zimbabwe, having evaded arrest at least twice through bribery.

Moyo was awarded bail of pula 10,000 (c. US $960), and promptly disappeared. In 2015, after NGO agitation, his name was added to Interpol’s most-wanted list of international traffickers.

In January 2017, the Zimbabwe Parks and Wildlife Management Authority (Zimparks) issued a press release naming Dumisani Moyo as wanted in connection with poaching. He was believed to be based in Lusaka, working with a notorious Zambian gang involved in cross-border poaching of elephant and rhino.

After lurking in Zambia for a long time, where he smuggled ivory, Moyo resurfaced in Zimbabwe.  He was eventually arrested in August 2017, as his Interpol notice had to be acted upon. At the initial hearing, Prosecutor Sebastian Mutizirwa told the court that Moyo could not be granted bail given the flight risk, and Moyo was detained in custody.

In Court this week, Moyo argued that he fears the harsh treatment he would be likely to receive, should he be extradited to Botswana and found guilty. Botswana’s Environment Minister, Tshekedi Khama, has been outspoken in his condemnation of poachers, saying in an interview in 2013 that would-be poachers needed to know that they might not go home alive.

Magistrate Josephine Sande ruled in favour of Interpol’s request for an extradition certificate and this extradition should therefore go ahead soon.

The integrity of Zimbabwe’s law-enforcement system is being tested once again, under the scrutiny of all those involved in tackling the illegal wildlife trade internationally.