You are here: Home » News » Remember me? 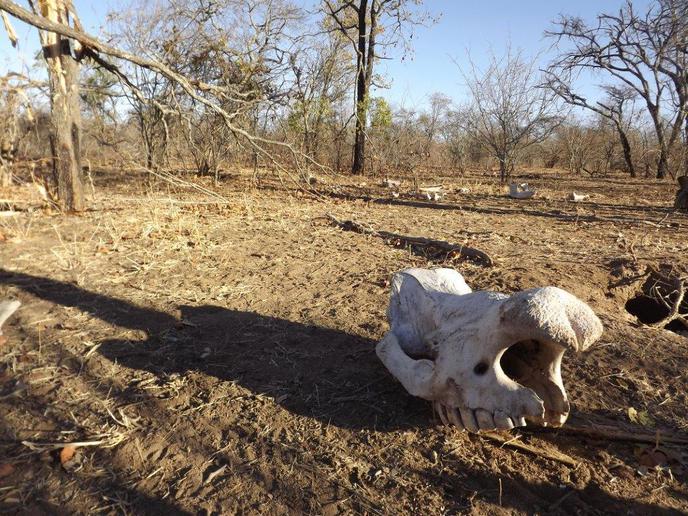 It was near 40°C and any normal rhino would be sleeping in the shade by this time of day. Nyaya, a young white rhino, and his companion were stressed though, so kept moving even with a massive horn wound through Nyaya’s hind leg. The trackers and vet had to jog to have any hope of catching up with the pair. The spoor lead consistently south east, into wind, then showed that the rhinos had spent some time at the dried bones of a poached adult white rhino. They were the bones of Chisasdenga…their father.

The two young rhinos, running in fear after being attacked by another rhino, had moved towards their father’s remains. Coincidence? Maybe. Had Chisadenga been alive and well, he would have confronted any other adult male rhino in his area and kept these youngsters safe from harm. Maybe his offspring knew who this pile of bones belonged to, and they had been running to him in their time of distress?

Stories of elephants and their interactions with the deceased of their own kind are well known. Rhinos, not so much. Maybe because many continue to think of black rhinos as solitary and anti-social and so don’t look for this sort of behaviour. Maybe because rhinos are not considered as intelligent as elephants to be capable of this sort of complex behaviour. Maybe because the signs of these interactions are far less obvious, normally indicated through spoor — tracks — rather than actual direct observation of the interactions. Spoor signs are often invisible to the uninitiated.

Sadly the current poaching onslaught has provided us with many examples of live rhinos showing interest in rhino carcasses and even skeletons. A calf leading trackers back to the freshly poached carcass of its mother or vice versa is the most obvious (and is behaviour that poachers take advantage of). A dependant calf needs its mother to survive so there is nothing really surprising in this. Adult bull spoor visiting the bones of a long-dead cow? A little harder to understand. Maybe just chance? Maybe visiting a long-time companion?

I recall attending a poaching site of a black rhino cow and calf. They had been shot eight months previously while sleeping in the midday shade. Less than five metres away was a well-established and recently used ‘rhino bed’ (black rhinos tend  to have favoured midday sleeping sites that they use regularly). The area was thick bushveld so there was no shortage of shady trees to choose from. Why choose to sleep so close to a pair of rotted carcasses? Maybe this now-dry pile of bones still represented the neighbours these rhinos once were to each other.

Another interesting example is that of  a firmly dominant black rhino bull. At  28 years old, Mangwe was in his prime and a force to be reckoned with. Eight-year-old Karl lived on the edges of Mangwe’s home range and though he had tried, was not yet a real contender. When Mangwe’s poached carcass was found, Karl had established a midden, or dung heap, on top of where Mangwe’s body had rotted into the ground. Some 10 metres away was Karl’s now well-used rhino bed. Perfectly positioned to keep a close eye on an old foe to be sure he does not get up again?

One thought on “Remember me?”