You are here: Home » News » Knowing your rhinos 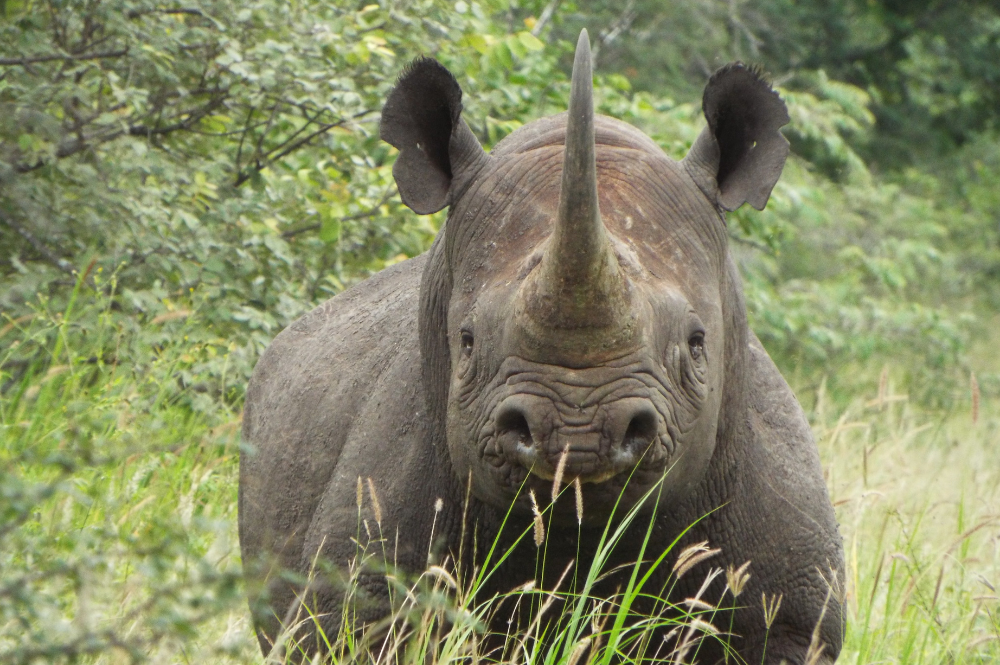 Why is knowing your rhinos important? And, what’s the best way to get to know a rhino?

Well, it may seem obvious, but regularly knowing where a rhino is, recording its health and its behaviour, is crucial to understanding more about our favourite creature. Not only does monitoring improve what we know about individual animals, it helps to protect them too. If we don’t know where rhinos are, or where they like to eat and drink, we can’t keep them safe or ensure they breed successfully: two essential goals when it comes to rhino conservation!

So how, exactly, does one keep an eye on a rhino? At the Lowveld Rhino Trust (LRT) in Zimbabwe, expert rhino monitors head out to do just that each day, constantly searching for black and white rhinos across the Bubye Valley Conservancy.

From a patrol vehicle, the monitors first locate fresh rhino spoor (footprints, browsing signs and dung). Once they know a rhino is in the area, they move out on foot to continue the search, carefully following subtle signs of the presence of rhino until they notice the flicker of an ear, the snap of a branch, or maybe the gentle squeak from a calf to its mum. As soon as a rhino is spotted, everything is noted down: time, location, behaviour, and, if necessary, any signs of injury or illness. A photo is taken to identify the rhino when everyone is back at base; each rhino has a unique notch pattern on their ears, so that all animals can be recognised and logged into the database.

Finding a rhino is no easy task: not only does it take a lot of experience to follow tracks successfully, but black rhinos in particular love to spend time in thick bush and scrub, making it difficult to spot them through the leaves. Despite this challenge, last year LRT’s monitors recorded an impressive average of 85 black rhino sightings each month.

Encouragingly, this diligent tracking led to some very special discoveries: 17 new black rhino calves and two white rhino calves were found during 2020! Of course, LRT’s monitors love to find new calves, as they demonstrate a healthy rhino population. Mindful of the important connection between a rhino mum and her young, trackers don’t get too close when calves are newly born, and so taking photographs can be hard. Here are a few of their favourite images from patrols during 2020:

This 25-year-old female lives in an area with a high lion density. She is seen here with her 10-month-old calf (lying down) and her older 2½-year-old calf just to the right.

Over the years, she has often been seen with both her dependent calf (i.e. less than two years old) and her previous calf (more than two years old). This is unusual behaviour, but LRT’s team think it may be to protect the older calves from lions. Generally, sub-adults are pushed away by the cow once they are ready to breed again.

This is a 12-year-old female with an extraordinary story: she was orphaned at just 19 months, when her mother was killed by poachers. After her mother’s death, she lived with her sister for three years, and then lived with a neighbouring cow and calf.

Despite her tumultuous start in life, she has become a brilliant rhino mum: the rhino pictured alongside her is her third calf!

This 19-year-old bull was rescued from an area that suffered extremely heavy poaching. The team were thrilled when they found him, and he has since become a favourite to everyone at LRT.

To assist with monitoring this bull, he was dehorned and fitted with a tracking device, helping the team know exactly where he is at all times – that’s why his horns are an unusual shape.

Thanks to this consistent care, the rhinos in this region are doing well. Last year, the monitors reported that the black rhino population in Bubye Valley grew more than it did in the previous four years. Maintaining this breeding success, alongside continued protection from poaching, is essential.

Thank you so much to all our donors and partners for supporting the Lowveld Rhino Trust’s important efforts. With your support, we can make sure that the rhino population across the Lowveld continues to increase.