You are here: Home » News » North Luangwa Runs for Rhinos 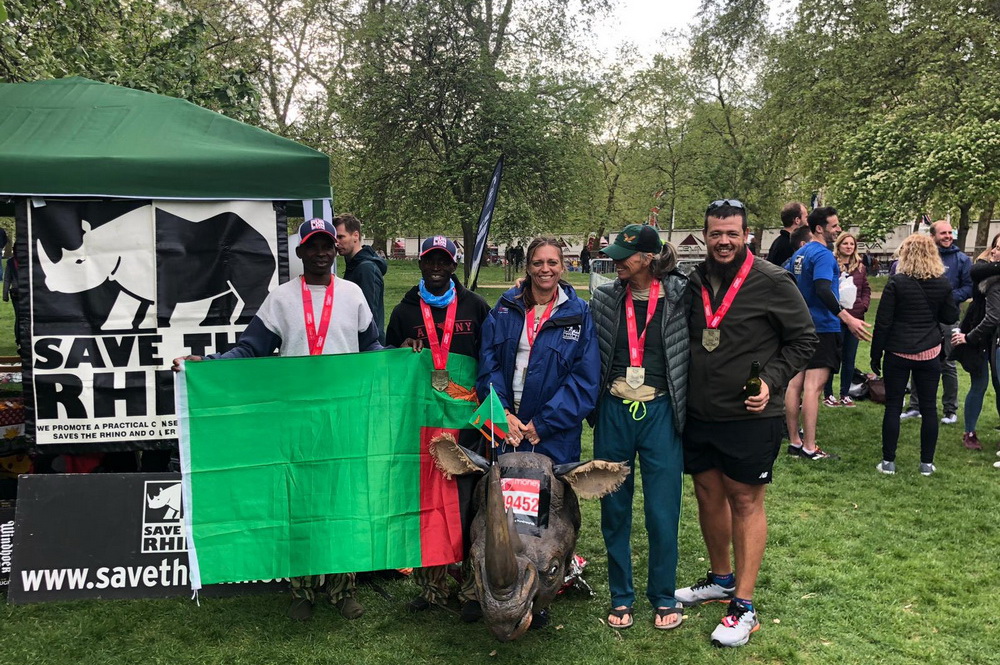 On the morning April 28th over 40,000 people woke up with an epic task before them: a 42.2 km race through the beautiful streets of London. To say our small team of runners from North Luangwa National Park in Zambia would be running in the same event as the Eliud Kipchoge and Sir Mo Farah is one thing, but for our little group this was no mere marathon: it was the trip of a lifetime and the culmination of months of planning and training.

Our five-person North Luangwa Conservation Park (NLCP) team was running for Save the Rhino International – a partner and immense supporter of the work we do in Zambia. The team consisted of Claire Lewis, project manager, Bennie van Zyl, specialist canine technical advisor, Patrick Chilufya and Amon Chikwanda, two of the Department of National Park and Wildlife Rhino and Elephant Protection Unit Officers, and Lari Merrett, a neighbour and long-time NLCP supporter. Alongside us for the weekend were also a team from Zimbabwe’s Gonarezhou National Park, also raising vital funds for Save the Rhino International.

The London Marathon attracts people from all over the globe but it is doubtful that many runners had to train under conditions quite like those faced by this team. In the months leading up to London relentless laps were completed up and down the 1.2 km grassy airstrip (that’s 35 up and back for a full marathon distance…). When we managed to get onto a road, a safety car had to drive ahead to keep a lookout for the local traffic: elephants and the dirt roads turned to a sloshy ankle deep mud during one of the Park’s soggiest rainy seasons. Quite different from the (beautiful) concrete jungle that London provides.

But wow, was it all worth it. For Patrick and Amon, the trip itself was an experience: “Really I was fascinated by the huge aeroplanes that I never thought of having a flight on” said Patrick. Once in London Cathy Dean, Save the Rhino International CEO, had planned full days for the team with trips and tours to see the iconic and little-known parts of this famous city. “I saw buildings I’ve never seen before and so many other things like the Queen’s house, museums, trains, ships, bridges, and types of food which I had never tasted before” explained Amon. If that’s not enough to take in, Patrick also had a go on a treadmill for the first time when we collected our race packs, he was running at world-record pace! The smiles all-round were huge.

If the hustle and bustle of London was exciting, the actual day of the marathon, with its tens of thousands runners and spectators, was completely mind-blowing. “I found myself among a huge crowd of more than 15,000 people bumping into each other”, Patrick remembers, “but I was taking long steady strides and people were cheering at us”.

Now imagine navigating those crowds, not to mention running over 40 km, in a 10 kg rhino suit. This was not Bennie’s first long-distance rhino costume experience. He had surprised the team last year by choosing to run ‘as a rhino’ at the last minute. Although he was a little more prepared this year, he still hadn’t tried on the suit until race morning. “I have to look through the little peeping hole hunched down holding the bouncing rhino head on my chest. I can only see the bottom half of people while running…but even with so many people passing me but I’m motivated.” It takes true grit and an unfailing sense of humour to take on a challenge like that for the second year in a row!

Despite awkward rhino suits, blisters and back pains, we all completed the run with impressive times and just a few minor battle scars. Patrick was the first home for the NLCP, “After three hours and some minutes I was at the finishing point, feeling tired but pleased, with a sparkling medal on my neck”. Perhaps Bennie sums it up best, “Getting to the finish line is the best feeling ever. You know that you just completed a great race against yourself and for rhinos across the globe”.

Back in North Luangwa, the team is still talking about their adventure and keeping up the running, despite the black rhino bull that seems to love the airstrip: he is our constant reminder of what all the hard work was – and continues to be – for.

Find out more about North Luangwa