You are here: Home » News » The Rhino Conspiracy 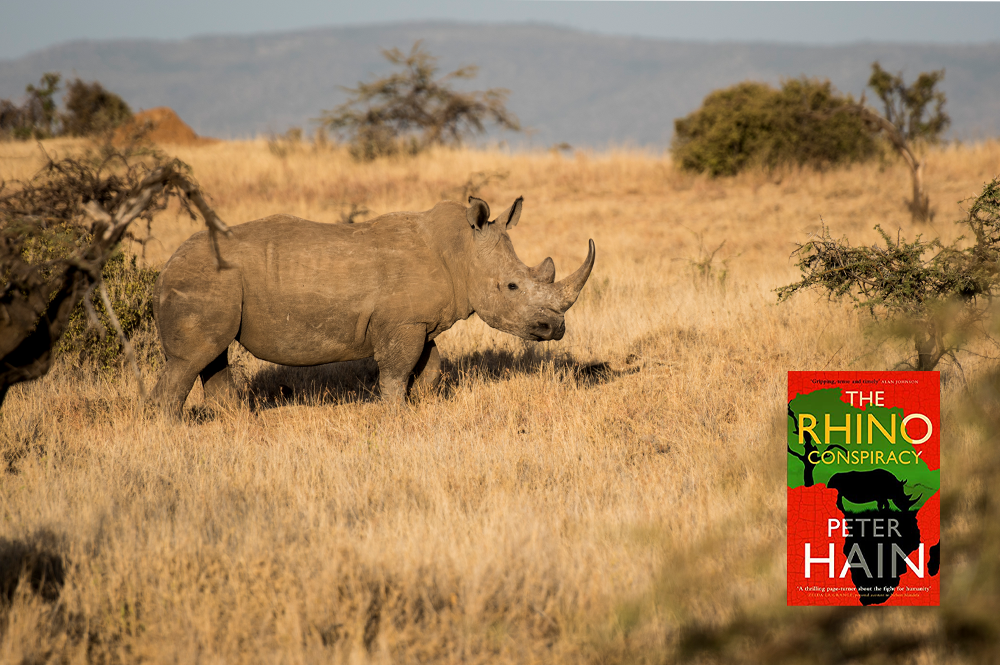 My outrage at the industrialised, criminalised scale of rhino poaching was prompted by witnessing them chomping innocently in game reserves – and then real-life based episodes like this one from my new thriller, The Rhino Conspiracy:

The heat had risen to a mind-numbing 47°C as the rhino bull heaved, belched and snorted, desperately trying to manoeuvre under the shade of a marula tree. Its ears twitched, its breathing pulsated, a colossus in its prime and in charge of its own territory.

Or so it thought, completely oblivious to the silenced .303 hunting rifle pointing directly at it. It was fitted with a Bushnell scope, with a live round in the chamber and ten more in a magazine. The rounds were soft-nosed – the purpose to explode on impact, creating maximum damage, tearing apart the hide…

The royal giant hardly heard the sharp whoosh emanating from the gunman crouching behind a nearby bush, only felt the searing agony in its hide as the first bullet exploded. Its distressed screeching tore through the midday haze and boiling silence of the bush, as it staggered and fell, legs splaying as it struggled to remain upright. Circling around as if drunk, bewildered by being unable to smell the source, dust billowing, it took a second bullet and collapsed, still trying to climb up. A third bullet, blood spouting, eyes glazing over vacantly, it finally, wrenchingly subsided.

… [the poachers] got out the pangas to hack viciously at the base of the horns, stuck them in a bag and slunk off…. The vultures would feast for days on the wretched hulk, jettisoning their white excrement all over what had once been such a proud, regal specimen.

But outrage is not enough. Brilliant campaigning and passion by Save the Rhino is vital. In the end however, rhino extinction will only be stopped if the corrupt politicians and global crime networks behind poaching are eradicated.

And also the ‘needs’ of rich elites in China and Vietnam who use rhino horn as a symbol of wealth and status, and as a part of traditional medicines. It’s their money that feeds the crime syndicates, that buys-off the politicians, that pays often poor African poachers, that kills game rangers by the hundreds.

The Rhino Conspiracy tells the story of brave activists who expose state-sponsored corruption and poaching in South Africa and I’m grateful that the renowned campaigner Julian Rademeyer, author of Killing for Profit, has endorsed it so enthusiastically as: ‘Masterful…A thrilling journey behind the frontlines of the battle to save Africa’s wildlife.’

Written as a thriller, hopefully it will bring to a new audience the reasons behind your important campaigning through Save the Rhino.