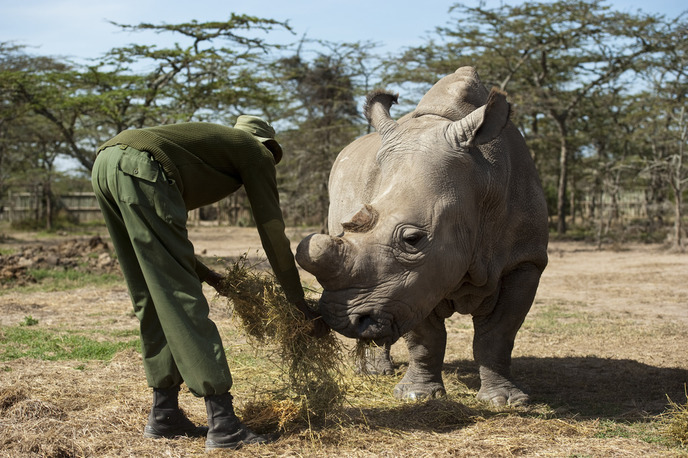 Today, we can all heave a – tiny – sigh of relief. The number of rhino poached in South Africa has declined, for the third year in a row.

This morning, at 10:00 local time, Minister Edna Molewa from the South African Department of Environmental Affairs released the 2017 poaching numbers from across South Africa. Although it is encouraging that poaching levels are not escalating, losses are still extremely high, the outlook for rhino population growth severely impacted, and poachers are proving adept at changing their target sites and trafficking strategies.

“For several years now, Kruger National Park has been the epicentre of the poaching crisis. Now, with increased security in and around the Park, poaching syndicates are targeting other areas of the country. KwaZulu-Natal has seen a massive rise in poaching during the last two years: increase the risk of being caught in one area and the poachers move to another. We’re not going to solve the poaching problem until we’ve patched all the vulnerabilities,” said Cathy Dean, CEO of Save the Rhino International.

While the Minister highlighted examples of international cooperation in arrests and presenting evidence to courts, and highlighted six cases that have been concluded or are awaiting sentencing, there was no indication of how many of the 2016 and 2017 arrests have actually been followed through to a successful conviction. Also notable by its absence was any discussion of some of the high-profile cases involving alleged kingpins, such as Hugo Ras, Dawie Groenewald, ‘Big Joe’ Nyalunga and Dumisani Gwala, whose trials have been repeatedly delayed.

CEO Cathy Dean notes: “Cherry-picking a few successes – while morale-boosting – is meaningless without the wider context of the investigations’ record. Where are the Key Performance Indicators so that we can properly assess progress on South Africa’s Integrated Strategic Management approach to combat rhino poaching? And why such slow progress in the big cases? The syndicates’ kingpins are not going to be deterred until the risk-reward equation moves heavily in favour of the law enforcement agencies.”

Minister Molewa rightly congratulates the real heroes, the rangers and law enforcement agencies without whose efforts the poaching crisis would be even worse. And she thanks national and international organisations and NGOs for their support. There have indeed been some significant advances in cooperation between agencies and sites, in the use of technology and intelligence analysis.

Our real fear is that, after more than 10 years of this crisis, the wider world will write off rhino poaching as a problem too big, too difficult and too expensive to solve. For those with longer memories, we have been through this before, in the 1970s, 1980s and early 1990s. We turned the situation round then, and we firmly believe we can do so again now.

Cathy concludes, “I really feel for the rangers, the majority of whom will have signed up because they love the bush and the great outdoors, who probably never imagined they’d be fighting not only for rhinos’ lives but their own lives. We must keep faith with our rangers.”

For the full text of Minster Molewa’s statement: https://www.environment.gov.za/mediarelease/molewa_highlightsprogressonimplementationofintegratedstrategicmanagementofrhinoceros