You are here: Home » News » Making every day better in Hluhluwe-iMfolozi 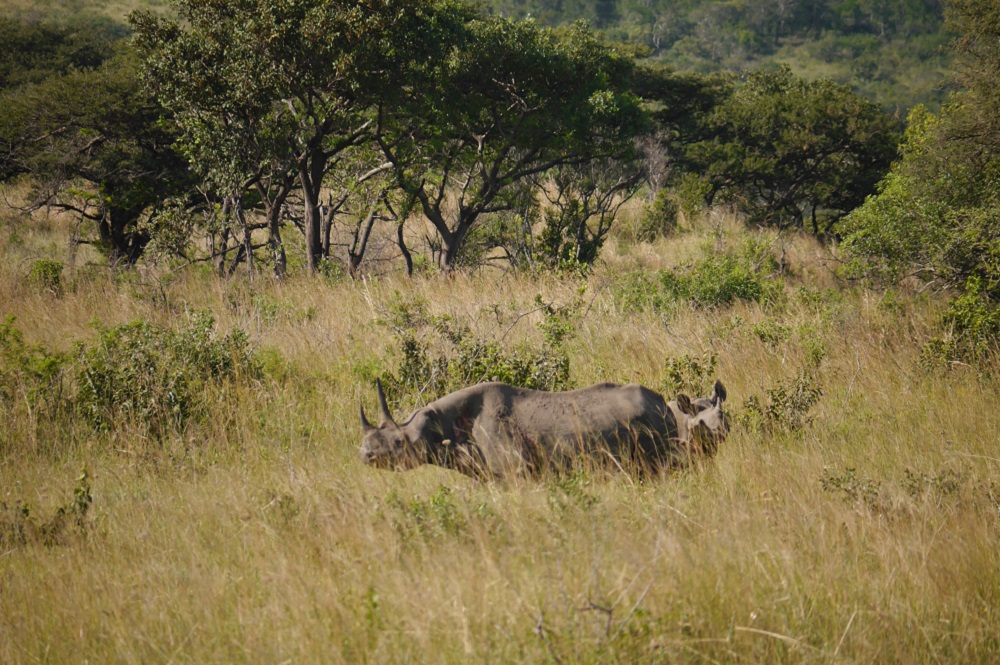 Hluhluwe-iMfolozi Park (HiP) in South Africa’s KwaZulu-Natal Province is renowned as “the birthplace of rhino”. HiP was the park where Southern white rhinos recovered from the brink of extinction with just 100 individuals to more than 19,500. Incredibly, every Southern white rhino population in the world is descended from rhinos originally within Hluhluwe-iMfolozi Park. Less well-known but just as crucial is HiP’s focus on the critically endangered black rhino.

Only 5,500 black rhinos exist today and finding suitable habitat to increase the population and protect the species from poaching is vital. HiP has been working hard ever since the poaching crisis began in 2008 to not only safeguard their rhinos under challenging conditions but also maintain a close eye on their black rhinos and improve their chance to thrive.

Inevitably, the heavy pressure of rhino poaching (1,028 rhinos were poached in South Africa alone in 2017) has meant that field rangers had less time to monitor black rhino populations. However, by using camera traps and aerial surveillance, as well bringing in a dedicated Black Rhino Monitor to the team, HiP has been ensuring their black rhinos are watched over.

Outside of monitoring, rangers have been improving their efficiency in stopping poachers by and improving enforcement strategies. This means not only having diligent patrols across all park areas but also ensuring that rangers have the right equipment, training and support to effectively confront and apprehend poachers.

We’ve been supporting a range of actions at HiP, one of which focuses on expanding their ability to check on rhinos from the sky. Last year, we covered essential costs for their light aircraft including repairs, fuel and maintenance checks. While these might seem mundane costs, it is this type of support that ensures rangers can do their jobs: between April and September 2018, the aircraft completed more than 95 hours of flight, watching over the Park’s rhinos and assisting with biological monitoring of their black rhinos.

Additionally, your donations have helped to purchase a number of rhino tracking sets, camouflage caps for rangers, and law enforcement equipment for staff working in the field. All of this provides HiP’s rangers with better tools to do their jobs and protect more rhinos. Incredibly, rangers now reach an average of 10,000 hours patrolling each month: that’s the equivalent of 14 rangers patrolling for 24 hrs a day, every single day.

But patrolling alone does not stop poaching. Improving cooperation and coordination across local enforcement teams is crucial, and the past year has seen a rise in the number of arrests made, demonstrating the teams’ hard work and dedication.

Recognising the importance of keeping high morale in ranger teams, we’re always prepared to give extra support for items that are often overlooked but have a real impact on rangers’ lives. A big focus in the Park has been improving maintenance tools such as lawn mowers, water pumps and generators, whilst developing old accommodation so that when teams are not in the field, they can enjoy the simple things such as hot water and comfy beds. Firearms, deployment kits and other such items have also been upgraded, giving rangers a much-needed confidence boost in a profession that can bring very low moments.

“It is the small things we tend to take for granted that have a significant impression on the morale of the frontline of conservation. Due to your continued and generous support, we have now moved beyond those initial basic requirements and focus on not just maintaining systems, but continuously improving operations, always hoping to make a breakthrough in this ongoing fight against rhino poaching, no matter how small.”

Speaking to Dirk and others at HiP really shows the positive effects your donations are having on the rhino conservation programmes we support. Thank you for making a difference and ensuring that the rhinos in HiP can be better protected than ever.