You are here: Home » News » Mules on a mission 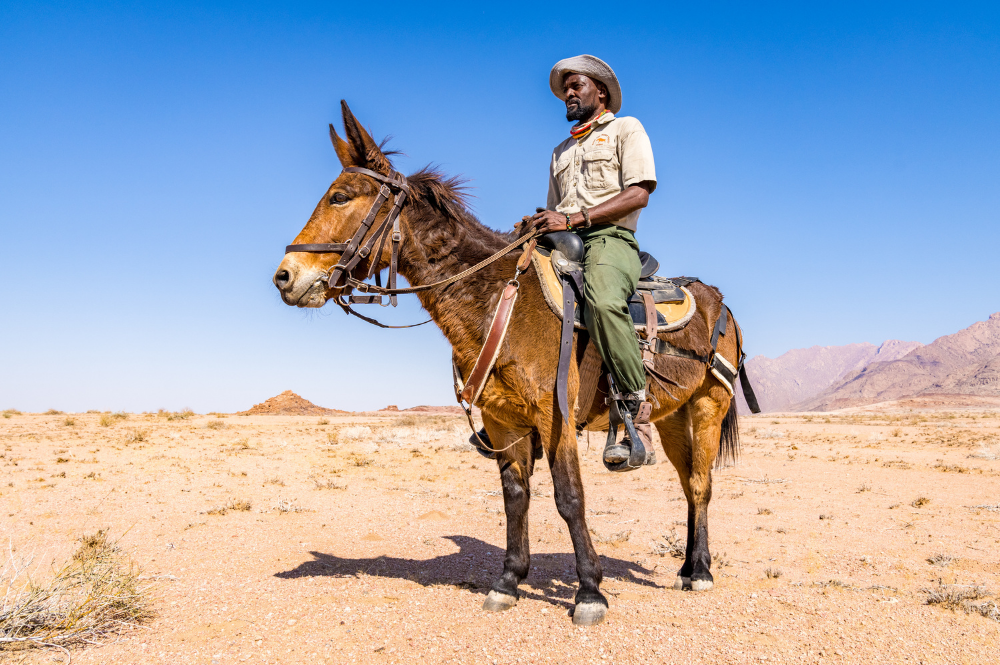 Save the Rhino Trust (SRT) has been monitoring the world’s largest population of black rhinos living outside of a protected area in northwest Namibia for nearly 40 years. During this time, SRT has always strived to be at the cutting-edge of rhino conservation, constantly experimenting with new ideas and innovations to advance local-level rhino protection.

However, certain challenges in the Kunene Region make conventional rhino monitoring very difficult or inefficient. Firstly, a substantial number of black rhinos in northwest Namibia live in remote and very difficult to reach areas that aren’t accessible by vehicle. Secondly, due to the arid environment and sparse browse, these desert-dwelling rhinos range across huge distances, sometimes covering more than 70 km a day: prohibitively far to follow on foot. 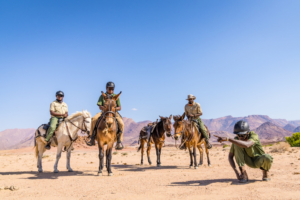 Mules! Mules possess the swiftness inherited by the horse, while also inheriting the sure-footedness and toughness from the donkey. They live longer than both horses and donkeys and have the natural endurance to perform extended patrols in the harsh rugged terrains. Though it takes longer to train a mule than a horse, once they understand what is expected of them, they are simply, amazing.

We, therefore, purchased mules that had been already trained but were badly treated. Hard work was put in by one of our team, who had great knowledge of working with mules. Rhino trackers had to be taught to ride and care for the animals, making sure that they could properly saddle the mules so as not to cause saddle sores or other injuries. Each tracker had to be equipped with helmets and short-chaps leggings. And everyone had to learn to do all this while carrying their rhino-monitoring equipment including binoculars, GPS, notebooks and cameras.

Once the mules and trackers were able to work well together, the next step was to familiarise the mules with the terrain. They adapted to the rocky terrain like a duck to water. (We’re going to set a trend for a new metaphor: like a mule to the desert!) Even on high mountains and up sheer rock formations, the mules seemed to thrive.

Now came the final test: introducing them to wildlife. The first animal they met was a lion that got into their stables. The incident showed us that the mules would protect each other and have a clear leader. The leader mule fought the lion and protected its herd but, sadly, later died. When they encountered a trumpeting elephant, two mules fled with their rider, while others stood fascinated. So far, they’ve not seen a black rhino. It will be interesting to see how they react.

Another very interesting observation was their keen sense of smell, demonstrated one day by bringing their nostrils down to the ground while following the scent of a leopard.

We expect a lot of adventure, learning and hidden challenges with our mule project. However, we are convinced that the mule project’s mission to access and provide better coverage to more remote areas and increase black rhino sightings will ultimately become yet another effective and innovative tool in our rhino conservation kit.

Written by Tommy Hall, Mounted Patrol Unit Project Leader, Save the Rhino Trust Namibia. A version of this article was originally printed in our annual supporter magazine, The Horn.