You are here: Home » News » The mother of all rhinos 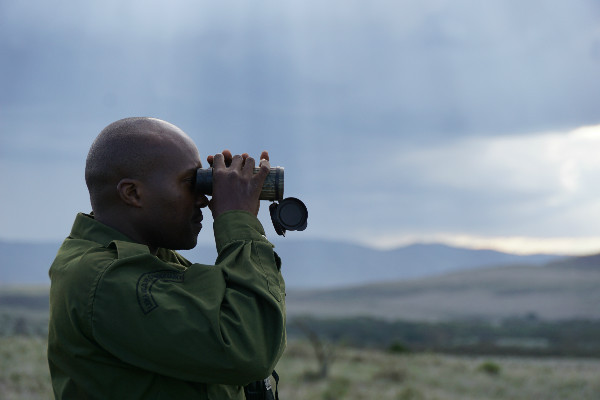 Mothering Sunday in the USA falls on a different day from Mothers’ Day in the UK, which is always celebrated in March. In 2017, Mothering Sunday falls on 14 May. The American version was established in 1914 by Anna Jarvis, the leader of the mothers’ groups established during the Civil War. Anna campaigned for a May date in memory of her own mother, who had died that month.

The rhino equivalent is also an Anna: Anna Merz, who set up the Ngare Sergoi rhino sanctuary on what is now the Lewa Wildlife Conservancy in Kenya, just north of Mt Kenya on the Equator. As her 2013 obituary in the Daily Telegraph said, Anna Merz “dedicated her life to the preservation of endangered rhinoceros species; Desmond Morris observed that she was to rhinos what Joy Adamson was to lions, Dian Fossey to gorillas, and Jane Goodall to chimpanzees.”

So it was entirely fitting that I kept bumping into memories of Anna today, Mothering Sunday, my first day at Lewa during this field trip to Kenya. After an early morning drive in Borana Conservancy, where we caught up with another of their thriving population of black rhino, I moved onto Lewa, where I spent the afternoon with a wonderful guy named Ian Lemaiyan, who works as Lewa’s Rhino Scientist, in charge of the rhino monitoring team.

Ian is just a delight to spent time with: one of those people who is utterly passionate about their job. He told me that when he was very young, his mother used to take him to the “safari walk” animal orphanage run by the Kenya Wildlife Service (KWS) in Nairobi, where he fell in love with a white rhino. His parents both passed away when he was only seven, and he was brought up – an only child – by his grandparents. His grandfather, a herdsman, seems to have been a particularly influential person in his life, giving Ian a birthday card when he turned 10 with a picture of an aeroplane on it, and telling Ian that one day he would become a pilot. (His grandfather lived in the Ngong Hills, just to the west of Nairobi, and every day he would see the small planes flying in and out of Wilson Airport, the domestic airport in Nairobi.)

After doing well at school, Ian went to the KWS college in Naivasha, where he studied environmental science and management. He then volunteered for the KWS for one and a half years, moving between departments: the environmental impact assessment department, then capture and veterinary, then the orphanage, and then back to capture and vet, during which time he assisted with rhino ear-notching operations (to aid individual identification) in Lake Nakuru and Nairobi National Parks, and then with the translocation of rhinos from Lewa to Borana in August 2013. Unsurprisingly, he fell in love with rhinos, determined to work with them, and was eventually taken on by Lewa in February 2014.

Ian was determined to show me as many of Lewa’s black and white rhinos as possible in one afternoon, and he wasn’t disappointed: we had an eventual tally of six white and 12 black rhinos. One pair was a black rhino cow named Anna – after the legendary Anna Merz – and her calf Anita, browsing happily on the new forbs pushing through the grass after the recent rains. They gazed at us – Anna displaying her ear-notches that marked her as no. 68 in the national numbering system, and her calf with her un-notched round, Mickey-Mouse-shaped ears, nonetheless adopting her mother’s attitude of endearing belligerent curiosity.

Between rhinos 11 and 12, we visited one of the gatehouses on Lewa that has been completely rebuilt thanks to funding from the Anna Merz Rhino Trust, a grant-making body established with Anna’s legacy. There we met David, who joined Lewa back in 1985, and who Anna always requested as her guide. He told me that Anna Merz was his “mother”, the person he looked up to above all others. We peeked into one of the new bedrooms (one for each ranger), the kitchen and ablutions block, admired the flower garden they have planted, and agreed that the next step should be to install solar power so that they can have light in their rooms to read at night and to charge their phones and radios.

As we headed up into the hills in search of more rhino, Ian explained how he had fulfilled his grandfather’s dream and become a pilot: a single Instagram post he’d made had been seen by a lady in India, who took up Ian’s cause and had set up a crowd-funding page for him, which eventually raised enough money that he could take flying lessons. A bright guy and a quick learner, Ian passed his exams first time round and now has a Private Pilot’s Licence. He has recently converted to be able to fly Super Cubs, the preferred aircraft for aerial game counts. Ian has not yet persuaded his grandfather to join him for a flight: apparently his grandpa took one look at the cockpit, declared that it wasn’t nearly high-tech enough and announced that he wasn’t getting in. Ian has not yet given up hope of celebrating his achievements with the grandfather who provided so much guidance in his early life; reinforced and encouraged by his other role model, Anna Merz.

I asked Ian why he likes rhinos so much and has made them the focus of his career. He explained that he found it hard to believe that something so big and strong was at risk of extinction, and that he needs to do everything he can to save them. He also enjoys getting to know their different personalities. He particularly remembered the day in 2005 when Lewa celebrated the birth of the 100th rhino on the conservancy, a great milestone. The calf was named “Mia”, the Swahili word for 100. I asked whether he had a favourite between black and white rhinos: he said immediately that the blacks were his favourite. When I queried why, he explained that the black rhinos are like tough kids, and that tough kids need more love.

Having spent the afternoon with Ian, I think that Lewa’s rhinos have found their new “rhino mother”, only this time the mother is male. So, if you’re celebrating the American Mothering Sunday today, spare a thought for Ian Lemaiyan, Anna Merz, and the rhinos of Lewa Wildlife Conservancy.

4 thoughts on “The mother of all rhinos”