You are here: Home » News » Meeting rangers at Borana 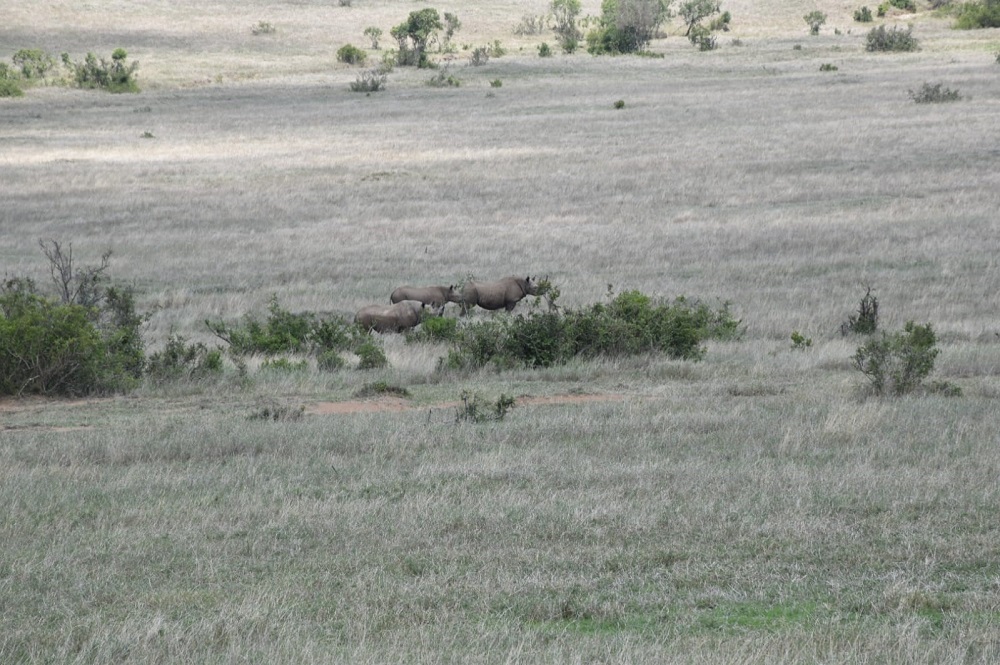 Borana is one of Africa’s newest rhino conservancies, situated in Kenya’s Laikipia region next to Lewa Wildlife Conservancy. Borana started life as a cattle ranch, reintroducing black rhinos into the landscape in 2013. Soon after, the neighbouring fence between the two conservancies – Lewa and Borana – was taken down to open up a combined 94,000 acre sanctuary, connecting the neighbouring ecosystems and providing enough space to ensure Kenya’s rhino population can continue to grow. This was a huge undertaking, made all the more worthwhile when soon after the rhinos had settled into their surroundings, new rhino calves were born.

On my recent visit to Borana, I had the opportunity to meet some of the incredible rangers working at the Conservancy. Their passion for protecting rhinos and other wildlife has been instrumental in growing their rhino population and creating a safe habitat.

First, I meet with William, the Head of Security at Borana. William has been working At Borana for more than 30 years, initially at the Ranch, before getting more involved in conservation. He explained to me that they collaborate closely with the neighbouring Lewa Conservancy in regards to their security and anti-poaching operations, helping to make sure that their rhinos stay safe. Thanks to their joint efforts, there has been zero rhino poaching across the Lewa-Borana landscape since 2015 – a testament to their hard work and dedicated efforts!

To support the incredible work of William and his team of rangers at Borana, we’ve recently helped to purchase a range of camping and law-enforcement equipment, such as boots, sleeping bags, camel backs and rations, some of which I get a chance to see in the Borana’s Operations Room. This not only helps to keep rangers adequately equipped to carry out their job in often harsh and potentially dangerous conditions, but also helps to provide a motivational boost as rangers feel valued and show pride in their work.

Interested to find out more about Borana’s rhino conservation efforts, I meet with Kiloku, who is in charge of rhino monitoring. We drive through the bushy hills in search of black rhinos, and soon enough we come across three – a mother with a calf, and a bull. Kiloku explains to me that he’s been very proud to work as a rhino monitor, tracking and identifying all animals to ensure their safety. He explains to me that, in addition to the threat of poaching, the natural predators and difficult terrain both pose risks to rhinos at Borana; only recently, one of the calves died due to hyena predation and last year, one calf fell off a rocky cliff, unfortunately dying from the severe injuries. However, despite the ever-present threat of poaching and other natural risks, Borana’s rhino population continues to grow and thrive across the landscape thanks to rangers’ tireless monitoring and anti-poaching work.

Finally, as we drove to the ranger outpost station by the gate, I had a chance to meet Elisabeth and Helen – two of the first female rangers that the Conservancy hired four months ago. Both of them come from the surrounding communities, and now are stationed at one of the gates to secure Borana’s boundaries against potential intruders.

Thanks to funding from our donors, we’ve recently helped Borana to renovate their ranger outpost stations, making sure that Helen and Elisabeth, together with other rangers, have a comfortable and safe place to stay while they are on their deployments. The outposts are simple but functional; comprising of a bedroom for each ranger, a kitchen area and a radio room with a TV, they provide both comfort and entertainment for rangers during their long deployments.

Meeting rangers at Borana was inspirational: with their passion, dedication and work ethic, Borana continues to provide a safe haven for rhinos and other wildlife, and we are very proud to support their work thanks to your donations!

One thought on “Meeting rangers at Borana”