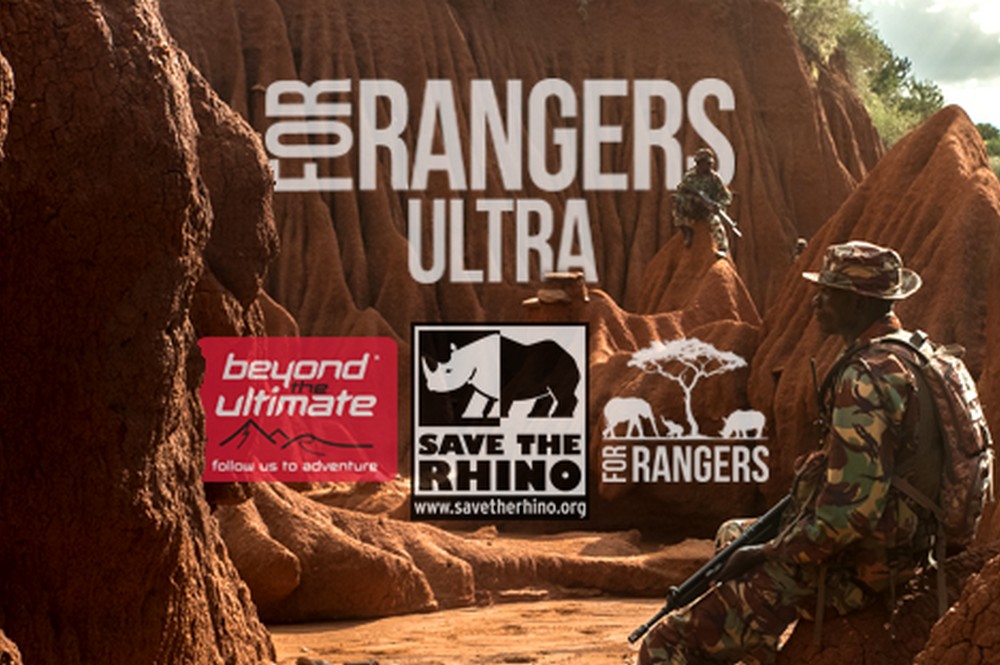 This morning’s race briefing reveals the most fantastic surprise. Rhino sightings are guaranteed! Jamie has arranged for Mei Mei, Ol Jogi’s cutest resident, to be out on the route near Checkpoint 1 for us all to see. Mei Mei is a two-year-old orphaned Black Rhino, she has been hand reared and she will eventually be re-introduced to the wild, hopefully, to go on and reproduce. She is a fantastic ambassador. There are also two adult Black rhino orphans and a Cheetah orphan that live in the same Boma (pen).

We’re told today is flat well, mostly, and for the majority of the route, the runners will be protected on one side from a perimeter fence. By this point, no one can believe race director Kris because yesterday was meant to be flat, too.

I haven’t seen a rhino yet and I’m keen to get a sighting, especially a black rhino. But the closest I get is spotting a midden: Black rhino use a midden (a mound of dung) to mark the perimeter of their territory. Tomorrow we’ll definitely see whites on the plains of Ol Pejeta

I realise I’ve gone on for four days now about ‘we’, ‘us’ and ‘they’ so it’s probably best I tell you who’s who.

We are Basecamp team, our driver and head is Flick. Flick is married to Sam Taylor, one of the ForRangers founders.  I’m also with Shane Benzie, a movement coach who works closely with Beyond the Ultimate and the runners. Checkpoint 1 team is headed by ‘Handsome’ Pete and Checkpoint 2 is headed up by Barry – who is equally handsome, according to the medic team. They both work with Sam and Pete at 51 degrees, they’re ex British army and expert in radio chat. They are the guys with the biscuits and the tea. Checkpoint 4 is headed up by Meghan, another Kiwi whose sister is currently winning the woman classification in the race. She was drafted in at last minute and is handy in the 4×4. Each day we are accompanied by two Exile Medics, they rotate on a daily basis, so I’ve been lucky enough to meet them all. They have the best travel stories.

Sam, Kris and Andy are the generals of this small army. They’re in the safety truck and they spend all day moving around the course looking after everything and making sure we’re all safe, in position and working hard. We have a media truck with Mikkel, Ryan, Will and Marcus – with the exception of medics these guys work the hardest. Bret and Adam are the head medics, behind their banter and jokes are two very serious and professional guys who we all know will get us out of any issue. One other notable member if the team is Timo, our heli-pilot and our eyes and ears in the sky. His sharp eyes can spot an Elephant, Buffalo or rhino from miles way off. He’s an expert pilot and it’s hard to believe the tight spaces in which he can land the chopper.

Most importantly, we have a huge team of rangers, 150 at least. They seem to be in every bush, on every rock and on every junction. It is a really special experience for the runners and staff to get time with them.

The last 10 km today is along a beautiful river that marks the boundary of the conservancy. It’s an extremely hot day and the river is very sheltered, it must be 30 degrees down here. How the runners will make it through this section of the race without jumping in the river I have no idea. The only thing that will stop them is the 3m exclusion zone outside the track – if the runners step beyond this it is an automatic disqualification. Today, we need to get our markers right because we don’t want anyone to make a wrong turn.

Basecamp is really hot and there is no cover, so we try to make some shelter using tarps. As usual, the first few runners are coming in just as we’ve finished setting up. We’re camping at a school, but there are no pupils as it is a Saturday. We recruit the kids that are around to stand at the top of the road and cheer when runners come in, this is useful for us because we can’t see them coming so we can get ourselves ready to scoop up some exhausted runners. Our plan is successful until the rhino costume shows up. When that comes around the corner the kids go quiet – they don’t know what to think nor do! I’m expecting to see a melted body in there.

We take the costume off Kenneth and he rolls on the floor he tells us he needs a few minutes to recover. We can only imagine the heat in that costume. Bryan, as always, is chipper. He gives me a nod and heads off to his tent. A few minutes later he comes back to tell me where he’s set up beds and to tell the others where to go. The word comes in that Oli isn’t going well today.

Every day I’ve waited on the line until the last runner comes in. I’m not sure if it’s helpful but I think it’s fair. I’m sure it was really tough out there. Today there will be some seriously stressed bodies coming in. Yesterday was hump day, but I feel like today might break people. In the end everyone that started the day finishes.

The call is made to have the race brief tonight, perhaps this is to allow everyone to have a lie in tomorrow. There is a surprise to reveal. We’ve known about this since April and I’ve heard more about it throughout the week. It’s great news and it will definitely get everyone across the line. I want to give everyone an update on fundraising too.

The team have raised an amazing £60,000. The real surprise though, is that Eliud Kipchoge, Marathon world record holder and Olympic gold medallist, will be on the line to hand out the medals.

It’s hard to believe tomorrow is the last day. I feel like we’re only getting settled in. I’m sure the runners feel different and want it to be over now.