You are here: Home » News » Crash course on rhino monitoring 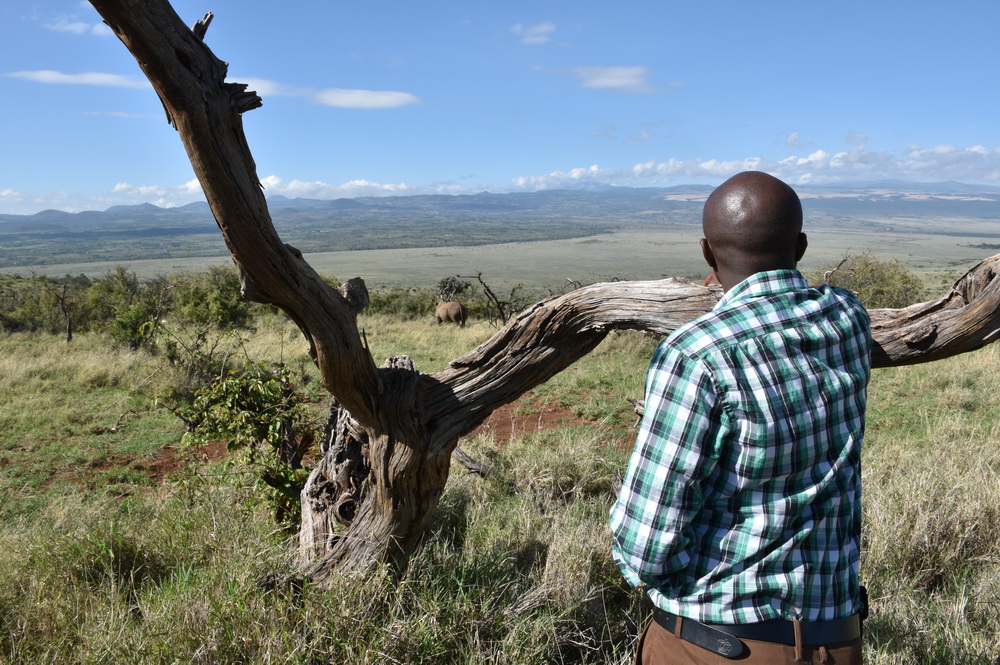 Lewa Wildlife Conservancy is one of the most established rhino conservancies in Kenya, having pioneered a unique model for conservation of wildlife and its habitat through protection and management of species, support of community conservation and development programmes, and the education of neighbouring areas in the value of wildlife. From its very beginning, rhino protection was at the core of Lewa’s efforts: Lewa not only provides space for a thriving population of black and white rhino but also translocates animals to repopulate new areas across Kenya.

On my recent visit, I met with Ian Lemaiyan, Lewa’s Rhino Scientist in charge of all rhino monitoring. We take a morning drive to see Lewa’s rhinos bright and early.

Ian is incredibly passionate about his work, and is determined to show me as many rhinos as possible; having worked here for more than five years, he knows the landscape in and out, and, communicating with rhino trackers on the ground by radios, we navigate to our first two black rhinos, resting in the grass. Ian finds his binoculars to take a closer look and asks me how many rhinos I see. I confirm that I can spot two black rhinos. Of course, I’m wrong. With a huge smile on his face, Ian explains that these rhinos are Sonja and Anna, two mothers, together with their calves, making it a total of four rhinos hiding in the grass! This is a spectacular sight, as black rhino literature would suggest that black rhinos are very solitary animals, and only one female and her calf would stay together.

Ian explains that often his experience and perception of black rhinos as a species would be rather different. “Over the last five years, I’ve studied rhinos, managed Lewa’s rhino data, and have seen females, males and sub-adults of both sexes mingle and spend time together. Their interactions seem tense at first as snorting and kicking of dung is involved, but as they smell each other, everything calms down: they mingle and feed together, just like these four rhinos we saw. Could we have been wrong all this time? Could the species be totally mistaken due to their nocturnal life?”

We drive further through the Conservancy and come across an adult white rhino called Owen; at a closer look, we can see marks of fighting on his face, a sign that another individual is trying to take over his territory.

All these signs are recorded for rhino monitoring purposes; as rhino trackers locate and identify rhinos in the field, they communicate all data to the radio room for collection; these include the name of the individual animal, their location, body condition, behaviour and if they have a companion. Such a comprehensive data set helps to guide and inform Lewa’s rhino conservation strategy, and by feeding into the national database, Kifaru (meaning ‘rhino’ in Kiswahili), it also contributes to national planning decisions.

In addition to recording and managing rhino data, Ian also monitors the habitat at Lewa, ensuring that rhinos have access to sufficient browse and plants for nutritious foraging. Together with the research team at the Conservancy, Lewa conducts a range of additional research to enhance their biological understanding of the species and their habitat, as well as actively taking part in designing the national strategy for Kenya’s rhino conservation efforts.

Finally, Ian receives a call that four white rhinos were spotted on one of the surrounding hills. We drive closer to them, and – just when I thought I’d missed breakfast completely – Ian comes prepared and takes out a pack of biscuits and coffee. We climb out of the car, and enjoy our morning breakfast, sitting in the grass and watching rhinos graze in front of us. I confess to Ian that it is, in fact, my birthday today and I couldn’t have wished for a better birthday treat than this!

One thought on “Crash course on rhino monitoring”