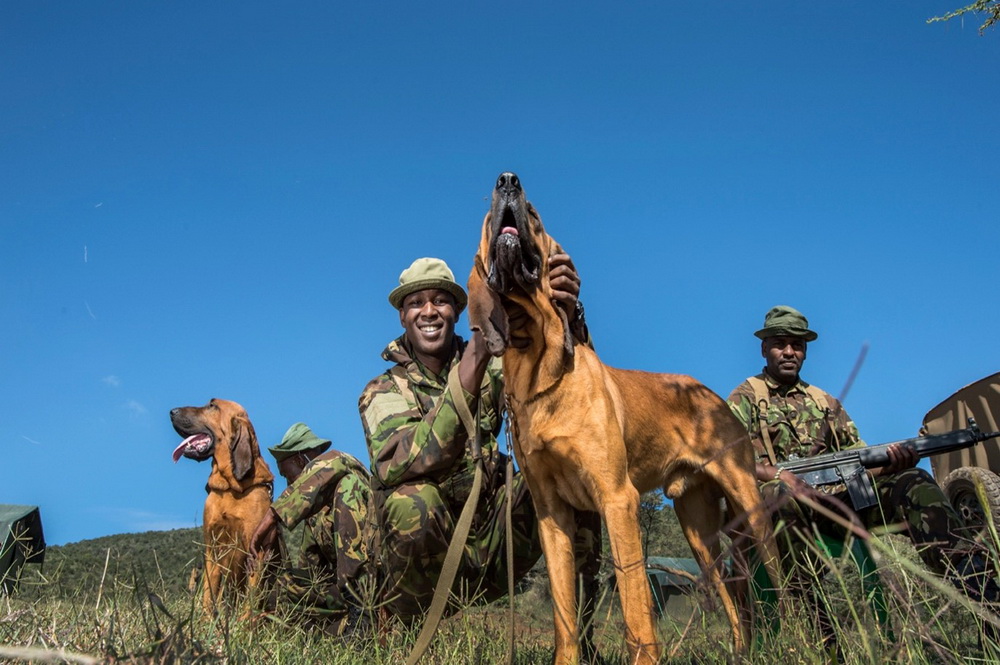 While poaching syndicates have become increasingly sophisticated and heavily armed over the last decade, ranger teams have similarly stepped up their response to stay ahead of poachers and protect their rhinos and other wildlife. At Lewa Wildlife Conservancy, rhino poaching has been kept at zero since 2013 – a huge testament to the dedicated efforts of their anti-poaching unit and canine team, who work day and night to patrol the Conservancy and ensure that all wildlife stays safe.

On my recent visit to Lewa, I had a chance to meet with Edward Ndiritu, Head of the Anti-Poaching Unit, and Joseph Piroris, 3rd in charge of the Unit and Commander of Lewa’s Canine Unit. It was fascinating to learn more about Lewa’s approach to conservation, which benefits from a close collaboration with local law enforcement authorities, together with the Police, Kenya Wildlife Service and other conservation stakeholders, and works towards a future where the surrounding communities both value, protect and benefit from wildlife. In practice, this means that Lewa’s teams not only work to protect rhinos and other wildlife within the Conservancy’s boundaries, but are actively being deployed beyond Lewa’s borders to respond to security incidents in the surrounding villages and across the wider landscape.

For example, Lewa’s canine team, operated by Joseph and his team of six dog handlers and two dogs, is often deployed to respond to calls from nearby villages to deal with cases such as livestock theft, burglary and other situations. The canine team is well-trained to quickly deploy one of their tracking dogs – Sasha or Ruby – to attend the scene of a crime, following up on the human scent until the teams track down suspects. Village elders greatly value the support they get from the Lewa’s teams, having the option to call a direct line to the Lewa’s operations room to request assistance with tackling crime in their communities.

Over the years, this positive relationship between Lewa and the surrounding communities has helped to significantly reduce crime rates in the County and clearly indicates the positive benefit that the Conservancy can bring to people living near wildlife. The close cooperation has also meant that Lewa has successfully created a ‘safety net’ around the Conservancy, and village elders immediately inform Lewa’s team if anyone suspicious comes through their community; acting as the first line of defence helping to apprehend would-be poachers.

I am really fascinated by the work of the Lewa Wildlife Conservancy is doing in creating a safer landscape for both people and wildlife. It is also amazing to see how dog squads can assist the Anti-Poaching Unit in being even more effective in their operations. I ask Joseph what he enjoys most about working with dogs and leading the team at Lewa; he says: “Dogs are very friendly and a pleasure to work with. They can help us track down and detect bad people, and therefore are an incredibly important tool in our efforts, and we work together as one unit to be even more effective. We are training and improving every day, and are grateful for being able to attend the Working Dog Workshop again this year in Nairobi; this is a great opportunity to network, and gain more skills, especially in tracking and law enforcement work.”

To support the work of canine teams across the African continent, we have helped to organise two ‘Working Dog Workshops’ to date; one in Johannesburg, South Africa, in 2018, and another one in Nairobi, Kenya, in May 2019. Having these teams from different conservancies and across different countries come together to share their knowledge and skills not only helps to improve their effectiveness, but also encourages collaboration for conservation among other programmes in Africa; something that we at Save the Rhino strive to achieve as we work towards our common goal of rhinos and other wildlife thriving in the wild!