You are here: Home » Thorny Issues » Trophy hunting and sustainable use: rhinos 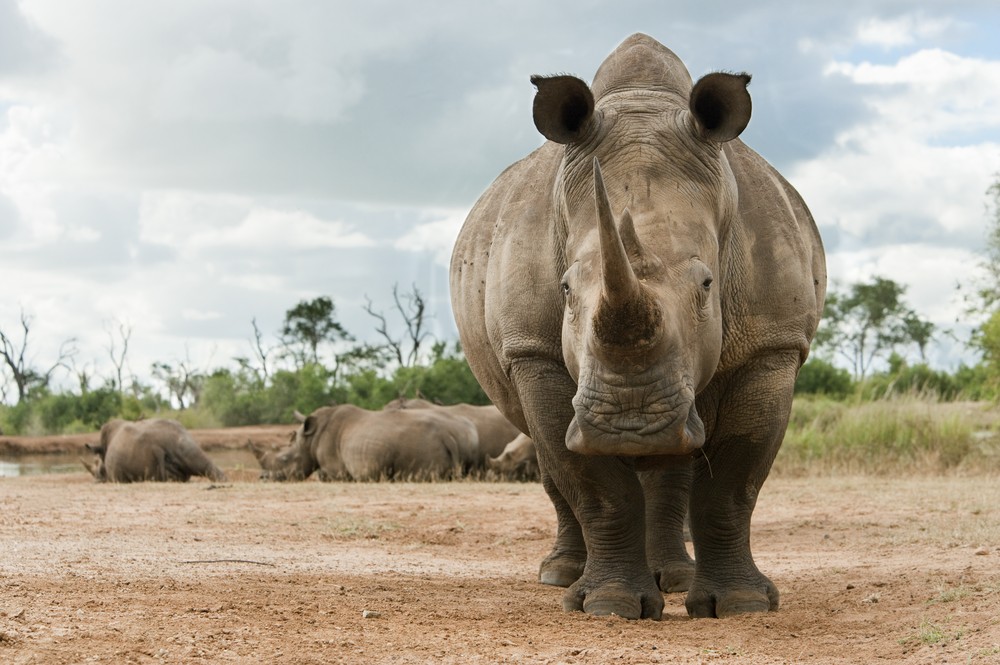 Trophy hunting is a highly emotive and complex issue on which we are often asked to comment. The article below provides some background and context, in the hope that it informs the debate.

What is trophy hunting?

Trophy hunting is defined as “a specific and selective legal form of wildlife use that involves payment for a hunting experience and the acquisition of a trophy (such as large antlers, or a body part) by the hunter”[i].

Canned hunting (the hunting of animals in kept in confined enclosures, increasing the likelihood of a hunter making a kill) is applicable to other species, with the canned hunting of lions under particular scrutiny.

Which rhino species are affected by trophy hunting?

Two species of rhino may be trophy hunted: the white and the black. The trophy hunting of black rhino and white rhino in Namibia and South Africa is legal under certain conditions.

Trophy hunting has been permitted for Southern white rhinos in South Africa since 1968. The numbers hunted per year have been determined by the rhinos’ owners, whose financial interest is to maintain a viable breeding population, from which to generate future revenues.

In 2004, the Convention on International Trade in Endangered Species (CITES) approved quota applications by Namibia and South Africa to allow each country to offer a maximum of five black rhino trophy hunts per year, but only of male black rhinos meeting certain criteria. Trophy hunting for black rhinos is only allowed under strict permit conditions, and permits are granted by the in-country CITES management authorities. The black rhinos selected for trophy hunts are chosen on biological principles: rhinos are old, generally post-reproductive bulls, who may have a detrimental effect on the overall rhino population, by being aggressive or territorial. Removing a ‘problem’ individual may enable a higher growth rate for or greater genetic diversity of the population as a whole.

Export of the trophies (usually the taxidermied head and horns, occasionally the whole body) is also regulated by the international conservation organisation CITES.

Some African rhino range states, such as Kenya and Botswana, are completely opposed to trophy hunting; others, including Tanzania, Zambia and Zimbabwe, allow hunts for other species but not rhinos.

No hunting is allowed of any of the Asian species: Greater one-horned rhinos, Sumatran and Javan rhinos.

What is the impact of trophy hunting on rhino population numbers?

How does trophy hunting compare to poaching?

Numerically, poaching – also known as illegal hunting – is responsible for the vast majority of non-natural rhino mortalities. Between 2012 and 2017, an average of 83 white and 3.5 black rhinos were hunted each year (i.e. a total of fewer than 87 rhinos per year). Within the same time period, an average of 1,140 rhinos were poached each year, i.e. during those six years, only 7.5% of the rhinos killed each year were trophy hunted, while the other 92.5% of the rhinos were killed without any income generation for the parks and conservancies in which they lived.

Furthermore, whereas trophy hunting only involves male rhinos, poachers are indiscriminate, killing rhino cows and even their calves, whether young or unborn.

Benefits for the local community

In several areas, local community conservancies help protect rhinos on their communal lands. Just as private landowners do, communities want and need to see a monetary benefit from having rhinos and other wildlife on their land. Funds from trophy hunting on communal lands provide an important source of revenue for community payments and other income-distribution schemes, as in the Game Management Areas around North Luangwa National Park in Zambia, in Bubye Valley Conservancy in Zimbabwe, or many communal conservancies in Namibia.

In recent decades, Namibia has pioneered the way for successful community-based natural resource management, allowing local communities to become directly involved in wildlife conservation. In 1997, the Namibian government established the Game Products Trust Fund (GPTF), to channel revenue from wildlife utilisation into conservation. Some 70-80% of the GPTF’s income derives from sustainable utilisation, including money from trophy hunting of rhinos and other species, tourism and live sales. The Fund makes grants to a range of organisations, including conservancies, NGOs and the Ministry of Environment and Tourism (MET), for use in wildlife conservation, with a particular emphasis on improving the relationship between people and wildlife.

Isn’t there an alternative to the trophy hunting of rhinos?

There is enormous pressure on wildlife from human populations. Land owners need to receive a benefit from keeping wildlife, otherwise land is converted to agriculture (‘cow or plough’) or built upon, reducing available habitat for rhinos and other wildlife.

The current rhino poaching crisis has been ongoing since 2008, and whilst we have – thankfully – seen a decrease in the number of rhinos poached since the record high losses of 2015, the current rate of poaching continues to be unsustainable. The high prices fetched for rhino horn on the black market mean that ruthless criminal syndicates are heavily involved in rhino poaching. It is increasingly expensive for state, community and private landowners to protect their rhinos. Since 2014, the cost of protecting a single white rhino has increased by 348% due to the poaching crisis and rising security costs[ii]. Huge sums of money are needed for intensive anti-poaching and monitoring patrols, including ranger salaries, technology such as thermal-imaging cameras and satellite trackers, and transport such as helicopters and vehicles. In fact, a number of high-profile private landowners in South Africa have said they will need to disinvest in rhinos, as they can no longer afford the cost of protecting them. Reducing the habitat available for rhinos risks the future growth of the continental meta-population.

Income may come from photographic tourism, but this is not always an option; not all rhino areas are scenic, accessible, or have the right infrastructure. Responsible and sustainable tourism must be considered. Furthermore, tourism can be fickle and therefore an unreliable source of income. For example, trophy hunting provided an important source of conservation income for Zimbabwe during the recent political turmoil, when visitor numbers dramatically declined.

According to the International Union for the Conservation of Nature (IUCN) ”successful tourism relies on a high level of capacity, capital, infrastructure, large wildlife populations, political stability and a scenic environment – all of which may be lacking; and it generally generates considerably greater environmental impact (through roads and infrastructure, water use, rubbish generation etc) than limited, carefully managed hunting.”

Some people have suggested that it ought to be possible to raise enough funds from charitable donations to remove the need to offer rhinos for trophy hunts. Ideally, donations and grants would cover all the costs of keeping rhinos. In reality, this is not currently possible: a 2015 paper[iii] quoted a figure of US $147 million per year just to protect Africa’s Southern white rhino population.

While security costs have risen, the live sale value of rhinos has decreased, making the sale of rhinos unprofitable (given the extra costs involved in having rhinos on one’s land, there seems to be less demand). In 2013, the average price for a rhino was $38,000; by 2018, the average had dropped to $14,000.

Problems with the trophy hunting of rhinos

The rhino trophy hunting system is not without its faults and it is crucial that CITES keeps a close eye on how the quotas are policed and ensures that any infringements are dealt with by criminal courts in the countries concerned.

For example, until 2012, Vietnamese criminal gangs were taking advantage of South Africa’s legal loopholes in trophy hunting by recruiting individuals with no hunting background to pose as trophy hunters. The proxy hunters then exported the legally obtained rhino horn to Vietnam, where it was destined for illegal markets. Overall, Vietnamese citizens had hunted more than 400 rhinos legally on privately owned properties in South Africa since 2003. Belatedly recognising the extent of the problem, in April 2012, South Africa formally suspended the issue of hunting permits to Vietnamese citizens, via a ruling that requires hunters to be members of national hunting organisations within their home countries. This has led to a marked decline in rhino-hunting applications from South-East Asian citizens, but also to a suspicious rise in the number of applications from other countries, indicating that different nationalities or expatriates are being recruited as proxies.

On rare occasions, there have been other abuses of the trophy hunting system. A black rhino cow was shot by a hunter in Namibia – it was unclear whether this was deliberate or incompetence (via the misidentification of the animal). In that instance, the permit to export the trophy was revoked by the Ministry of Environment and Tourism.

At Save the Rhino, we understand that trophy hunting is a highly controversial issue, and we continue to liaise with other experts and conservation organisations such as the IUCN SSC African Rhino Specialist Group to solicit their advice on the subject.

In an ideal world rhinos wouldn’t be under such extreme threat and perhaps there would be no need for trophy hunting to generate funds. However, the reality is that rhino conservation is expensive and there are huge pressures to provide enough land and security measures. Parks and programmes that allow trophy hunting can use the funds generated to protect their rhino populations as a whole. Like it or not, trophy hunting has played a key role in the recovery of the Southern white rhino population in South Africa, helping the species recover from the brink of extinction.

So, in common with many conservation organisations, including the International Union for the Conservation of Nature (IUCN), Save the Rhino International recognises that the sustainable use of wildlife, including the responsible trophy hunting of rhinos, has a valid role in overall rhino conservation strategies. For the record, Save the Rhino is not involved with decision-making about quotas or animal selection, and Save the Rhino does not accept donations derived from the sale of rhino trophy hunts, legally sold horns or live sales of rhinos.

Poaching is, by far, the biggest threat to rhino population growth.

[i] Baldus, R. D. & Cauldwell, A. E. (2004). Tourist Hunting and Its Role in Development of Wildlife Management Areas in Tanzania, Dar es Salam.