You are here: Home » Thorny Issues » Tackling the demand for rhino horn 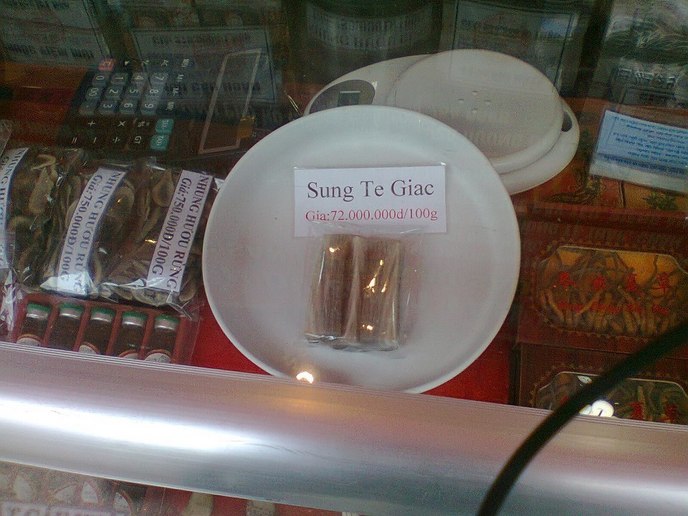 A version of this article was originally published in The Horn, Spring 2013.

During 2012, 668 rhinos were killed in South Africa alone. That’s one every 13 hours. Over the past six years, rhino poaching has increased by a staggering and unprecedented amount and is mainly attributed to the growing demand for rhino horn from Vietnam. So can this surge in demand be tackled?

This is not the first time that rhinos have faced such a crisis. From the late 1970s through the mid 1990s, most rhino populations were ravaged by phases of intensive poaching to support the traditional rhino horn trade for medicine in Asia and jambiya dagger handles in Yemen. Many countries saw their black rhino populations falling to drastically low numbers or completely disappear. Overall black rhino populations declined by an estimated 97.6% from 1960 to 1994, with numbers reaching a low point of 2,410. The Northern White Rhino fared even worse and was virtually eradicated from throughout its range in the Democratic of Congo and Sudan, before eventually being declared extinct in the wild in 2011. So who was driving this initial poaching crisis and how was it stopped?

Rhino horn has been used in traditional Chinese medicine for thousands of years. It is classified as a ‘heat-clearing’ drug and was typically combined with other medicinal ingredients to treat a variety of ailments from fevers to convulsions and epilepsy. Rhino horns were also carved into highly prized libation cups and chalices which were reputed to have the ability to detect poison. There have been ever-shifting peaks in demand for rhino horn from various countries.

Throughout the 1970s, Japan was the number one major consumer of rhino horn in Asia. The principal market dynamic was the sale of manufactured medicines, which were branded products and available in pharmacies and stores. In 1980, Japan ratified the Convention on the International Trade in Endangered Species (CITES), a treaty that aims to ensure that international trade in wild animals and plants does not threaten their survival. Upon joining the treaty, the Ministry of Health required all manufacturers of rhino horn medicines to find substitutes for their products. Generally speaking, the use of manufactured medicines in Japan meant the use of rhino horn was easier to control, as the products were mostly registered with the government in the country of manufacture and one company dominated the manufacture of rhino horn. Demand reduction strategies did work in Japan and the country is no longer a problem for rhinos.

Trade in rhino horn then shifted from Japan to South Korea, which through the 1980s was a major consumer of rhino horn in Asia. Most sales were over the counter, where rhino horn was prescribed by practitioners who generally operated as both as doctors and a pharmacy, prescribing specific treatments for patients. The medicines are generally produced on site and sold directly to consumers. An import ban in rhino horn was implemented in 1983 and South Korea also ratified CITES in 1993. A key step to reduce the demand for rhino horn in South Korea was the threat of sanctions under the United States’ Pelly Amendment to the Fishermen’s Protection Act of 1967, an important piece of national conservation legislation that provides a Congressional process for bilateral sanctions to be imposed against countries seen to be undermining international species conservation policy. Eventually, the Ministry of Health completely excluded rhino horn from the official Korean Pharmacopoeia. These combined steps mean that Korea is no longer involved as a consumer country of rhino horn.

From the mid 1980s to early 1990s, Taiwan was Asia’s biggest rhino horn consumer. As with South Korea, over-the-counter sales were the principal source of rhino horn. When the Taiwan market peaked, Zimbabwe lost most of its rhinos. The US government also persuaded Taiwan to respond to the threat of Pelly Amendment sanctioning. An import ban was implemented in 1985 and the government prohibited sales in 1992. The Taiwanese Ministry of Health then commissioned double-blind randomised clinical trials to study the efficacy of rhino horn and recommended that rhino horn was not worth using. Since these measures were implemented, Taiwan has not been a user of rhino horn.

China was a minor consumer in the 1970s and 1980s, however it became more active in the 1990s. In joining CITES, imports were banned in 1981 and exports in 1988. Domestic trade was prohibited and all stockpiles of rhino horn were registered and sealed in 1993. China continues to be of concern as a rhino horn user country. With a capitalist economy and less state-run business, individual entrepreneurs and private business have created more varied avenues for illegal trade.

Yemen was a large user during the 1970s and 1980s, where rhino horn was used for the carving of traditional dagger handles known as ‘jambiya’. However the government has since brought in proper legislation to implement CITES’ ban on rhino horn trade and has expanded its staff involved in wildlife conservation at the upgraded Environment Protection Agency. This, combined with a public awareness campaign, has virtually eradicated the Yemeni demand for rhino horn. Furthermore, economic hardship and political stability mean that most Yemeni can no longer afford the high prices fetched for rhino horn on the Asian markets.

Demand reduction can be achieved!

These examples have shown that over the decades, intensive international pressure and outcry at the rhino crisis led to poaching levels and the illegal trade gradually decreasing. By the mid 1990s, virtually all major traditional consuming countries had rhino horn trade bans in place and initial demand reduction strategies began to have an impact. For 16 years between 1990 and 2005, rhino poaching losses in South Africa averaged 14 animals each year. However since 2005, the killings have surged and Vietnam has rapidly grown to be the world’s largest recipient of both legal and illegal rhino horn from South Africa. The situation is now at a crisis point.

Asia’s rhino horn trade appears to be linked directly with economic development and increasing levels of disposable income. Over the past decade, Vietnam has experienced rapid economic growth, with demand soaring for wildlife products. Rhino horn is increasingly used as a status symbol amongst the wealthy elite, in business deals and social gatherings, where rhino horn is ground to a powder, mixed with water and drunk. It is also being used for non-traditional purposes such as a miracle cancer cure (it is used in tandem with chemotherapy, where the rhino horn is believed to minimise the harmful effects of the other treatments) and a body detoxifier following excessive consumption of alcohol or rich food.

The diversification of uses for rhino horn and the alarming rate of poaching represent a serious cause for concern and emphasises the urgent need for action from Vietnam. In the past, CITES had an important role in focusing international action and getting rhino horn user countries in Asia to implement rhino horn trade bans. It needs to apply to same force to Vietnam. A priority is for the Vietnamese government to show political will in tackling the illegal trade in rhino horn, through rigorous law enforcement activities, arrests and sentencing. Public awareness campaigns will also have a vital role changing attitudes and increasing public understanding of the damaging effects of illegal wildlife consumption.

Recent history has shown us that demand reduction in Asia is possible and has been successfully achieved in many different countries. We are positive this can – and will – be done again.

Our very grateful thanks to Tom Milliken of TRAFFIC, whose information was the basis for this summary.