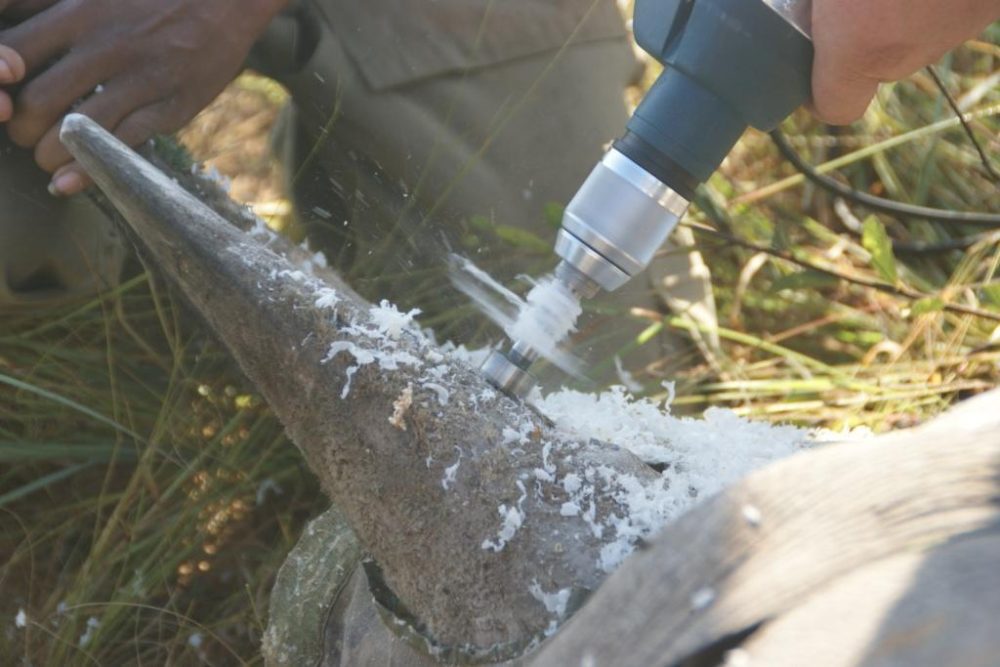 It was hailed as a ‘silver bullet’ to protect rhinos from the current poaching epidemic. On the surface, the poisoning of rhinos horns seems like a fantastic idea – surely no one would want to consume rhino horn that is laced with poison and toxic chemicals?!

The poisoning of rhino horns first appeared on the conservation scene in 2010, when Ed Hern, owner of the Rhino and Lion Reserve near Johannesburg, made a statement claiming that he was planning to inject the horns of the rhinos on his game reserve with poison in an effort to deter poachers. Ed Hern stated that: “The aim would be to kill, or make seriously ill anyone who consumes the horn”.

It was hoped that this proactive solution would prevent rhinos being poached in the first place. At the time the method was experimental, and the exact effects of the poison unknown. However, it was known early on that the poison is not damaging to the rhino itself; a rhino’s horn does not have any direct link to its bloodstream. Ed’s initial idea developed into the Rhino Rescue Project, which saw the concept roll out across South Africa.

The poisoning process involves the drilling of holes directly into the rhino’s horns and then infusing them with highly toxic ectoparasiticides, which are also used to control ticks etc. According to the Rhino Rescue Project, although ectoparasiticides are not lethal to humans in small quantities, they remain toxic and symptoms of ingestion may include, but are not limited to, nausea, vomiting and convulsions (all dosage dependent).

In addition to the horn poison, the project began infusing the horns with a bright colour dye, in an attempt to ward off potential poachers. Since then, there have been several high-profile cases of private game reserves and state parks injecting poison and dye into their rhinos’ horns in an attempt to deter poachers. In most instances, the reserves and parks have used signage to warn potential poachers that the rhinos’ horns have been treated.

So firstly let’s examine the issue IF the poison did work as intended, and then we’ll take a look at the results of a new study into the effectiveness of the infusion method.

Taking a look at the first theory, it seems that poachers simply do not care whether the rhino they are killing has a poisoned horn or not. For example, Sabi Sands (a private game reserve adjacent to Kruger National Park) had poisoned its rhinos’ horns and widely advertised the fact. Yet that didn’t stop poachers from targeting their rhinos. Even if the poacher knows that the horn poisoned, he is likely to shoot the rhino anyway because he’ll probably still be able to sell the horns to a middleman for a large sum of money. The poacher is hardly to admit to the buyer that the horns may have been poisoned.

Those involved in the rhino horn trade are hardened criminals who slaughter rhinos; the poachers / traffickers / importers won’t bat an eyelid if they are harming someone living thousands of miles away who they have never met. You may think that a middleman would know that the horns have been poisoned or dyed, due to a change in appearance. However, in the wild, horns get scuffed and stained by soil and vegetation as rhinos wallow etc. and the dye will soon fade until it has completely disappeared.

If we look at the bigger global picture, poisoned rhino horns already exist outside Africa, but have been targeted by criminals for several years, proving that the issue of poison doesn’t matter to the syndicates. These ‘poisoned’ rhinos horns are those historical items, such as trophy mounts or antiques, sitting in museums and auction houses across the globe, which were preserved with a heavy dose of arsenic or other toxic substance. Yet this hasn’t stopped the theft of nearly 100 horns across the UK and Europe destined for Asian markets.

Even if poachers were deterred from killing rhinos with poisoned horns, this would likely deflect them to areas that hadn’t poisoned their rhinos. It is impossible to poison the horns of every single one of Africa’s rhinos. With over 25,000 rhinos to protect on the continent, there is simply neither the funding nor time to infuse them all. In addition, rhino horn grows at a rate of around 4-7cm per year. To continue the technique, a rhino’s horn would need to be re-poisoned around every four years for the substance to remain in the horn. This is not only expensive but is also a particularly invasive technique, and each time a rhino is darted there is a risk from the anaesthetic.

The second assumption is that rhino horn consumers in Asia would be deterred from using rhino horn if they knew there was a risk they would become ill. The technique effectively relies on publicity. However, the exact effect of the poison on consumers is unknown and there is little evidence of consequential illness. For all the talk of poisoned rhino horns, there doesn’t appear to have been any impact on consumer behaviour in Asia. There is little publicity of the concept in Vietnam or China.

Even if the consumers did become aware of the risk of poisoning, this could lead to a dangerous mindset of ‘What doesn’t kill you makes you stronger’. The initial concept of deterrence could have the exact opposite effect. If person consumes rhino horn and nothing happens to them, they may believe that they have ‘conquered’ the poison, or that the rhino horn is so ‘magical’ that it is counteracted the poison itself, and they will continue to buy rhino horn believing in its curative properties.

A major problem is also that the uses of rhino horn are rapidly changing and Traditional Chinese Medicine is no longer the main driver. Now rhino horn is predominantly being used as a status symbol by wealthy urban businessmen; they may choose to consume the horn, but they will often display the item whole. The use of poison is going to have no impact on those buying rhino horn for ornamental use.

Frighteningly, the poisoning of horns may actually drive up the price of ‘pure’ rhino horns, which could intensify rhino poaching. Those buying rhino horn are incredibly wealthy and will buy their horns through ‘trusted’ networks. If the poisoned rhino horn rumour circulates as intended, then buyers may be willing to pay a premium to the criminals who guarantee they can source un-poisoned rhinos horns. This could then drive the overall price of rhino horn even higher.

With so many game parks and reserves considering whether to poison their horns, South African experts undertook a research study, titled ‘’Are chemical horn infusions a poaching deterrent or an unnecessary deception?“, based on the examination of a treated white rhino horn, as well as available literature and expert opinion. The paper was co-written by four of South Africa’s leading wildlife scientists and veterinary experts: Sam Ferreira and Danie Pienaar of SANParks Scientific Services; Dr Markus Hofmeyer of SANParks Veterinary Wildlife Services; and Dr Dave Cooper of Ezemvelo Wildlife Services. The paper, published in the journal Pachyderm in July 2014, examined the efficacy, risks, legal and ethical implications of poisoning rhino horn through chemical infusions.

The paper’s conclusion? Conservationists should not use the infusion technique when dealing with the rhino poaching threat. The main reason against the poisoning of rhino horns is that the toxin, which is mixed with the dye in liquid form, does not permeate or spread throughout the high-density fibre of the rhino horn. When studying the distribution of the coloured dye, the researchers found that the dye was only found in the drilling holes and no other part of the horn. This means that the poisoning is ineffective.

Some have criticised the release of the findings, saying that we should continue use the ‘fear factor’ to dissuade rhino-horn consumers. However, the paper’s co-author Ferreira warns that perpetuating the bluff is not a wise strategy ”Relying on publicity to deter poachers also relies on convincing managers that the chemical treatment of horns through infusion will secure rhinos. Poachers will benefit and managers will lose when the bluff of horn treatments fails.”

With the rapidly increasing poaching crisis, it is understandable to see why game reserve owners are willing to try anything to protect their rhinos. However, the poisoning technique appears to be a ‘red herring’ and, with scarce resources, it is important that programme managers know that the technique doesn’t work, so that funds are spent where they can make the most impact.

We need to continue working to address the demand for rhino horn in Asian countries, particularly Vietnam, through targeted research and behaviour change campaigns. Meanwhile instead of focusing on the individual rhino, we need to continue funding projects that will protect overall rhino populations and crack down on the criminal syndicates involved. We need to focus on the more resources for anti-poaching and rhino monitoring teams; training of the judiciary so that they understand the seriousness of wildlife crime and impose commensurate sentences; and improved law enforcement and cross-border co-operation by Interpol, national police forces and illegal trade investigators.

Click here to read more about Save the Rhino’s efforts to reduce the demand for rhino horn in Vietnam.

Carte Blanche TV expose on rhino horn poisoning: Part 1. Please note that this video has been removed. For information on what the programme covered, please see this article on Annamiticus’ website.

To read the full paper on “Chemical horn infusions: a poaching deterrent or an unnecessary deception?” please follow this link to the Rhino Resource Center’s website.

Coverage of the issue prompted the return of a major donation, which had been earmarked for rhino horn infusions, to the original donor.