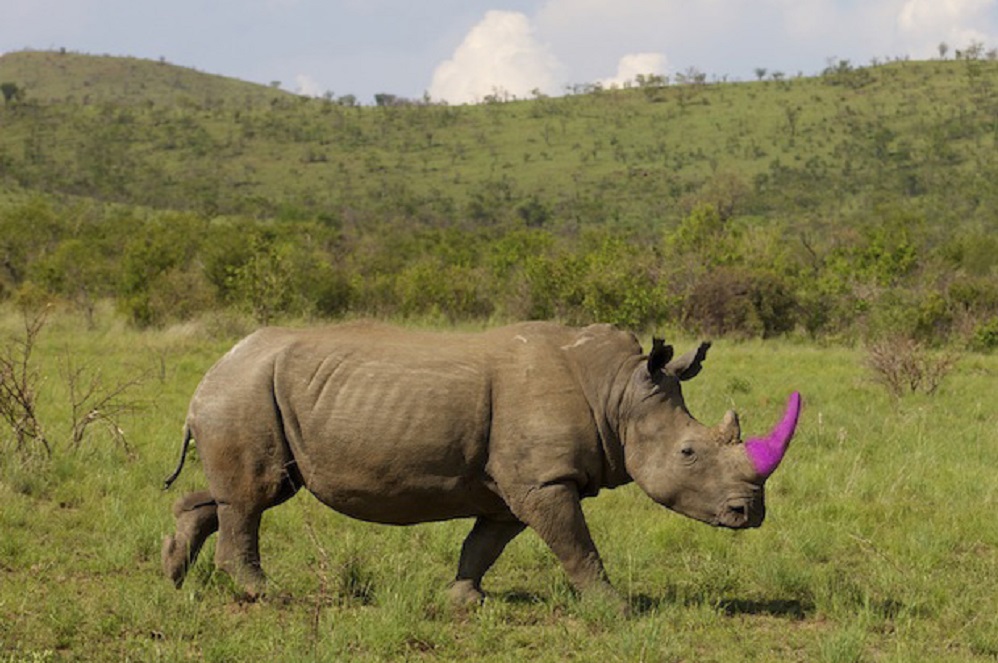 There have been some entertaining images of rhinos / elephants with bright pink / purple horns / ivory circulating on social media. These images first surfaced, we believe, in an article on www.takepart.com in April 2013, and have been revived in mid-2015.

But before you dust off your camera and book that flight for a rare sighting of a non-grey pachyderm, it is worth noting these images were digitally altered for effect to highlight the concept of infusing rhino horn with a mixture of dye and poison.

When first published online, this photo (above) was captioned: “This photo has been digitally altered and is not an actual photo of a rhino at Sabi Sand. (Photo: Heinrich van den Berg/Getty)”

Who is promoting the idea?

Rhino horn infusions have gained more media coverage this year because AON South Africa and ONE Financial Services Holdings have offered cheaper insurance to cover against the risk of poaching. But there’s a catch: you can only take out this insurance if your rhinos undergo horn treatment provided by Rhino Rescue Project.

What’s with the dye?

Presumably, those behind the dyeing idea had in mind the dye packs used to deter bank robberies. According to Wikipedia:

“A dye pack is a radio-controlled incendiary device used by some banks to pre-emptively foil a bank robbery by causing stolen cash to be permanently marked with dye shortly after a robbery.

“In most cases, a dye pack is placed in a hollowed-out space within a stack of banknotes, usually $10 or $20 bills. This stack of bills looks and feels similar to a real one, with technology allowing for the manufacturing of flexible dye packs which are difficult to detect by handling the stack.

“When the marked stack of bills is not used, it is stored next to a magnetic plate near a bank cashier, in standby or safe mode, ready to be handed over to a potential robber by a bank employee. When it is removed from the magnetic plate, the pack is armed, and once it leaves the building and passes through the door frame, a radio transmitter located at the door will trigger a timer (typically 10 seconds), after which the dye pack will explode and release an aerosol (usually of Disperse Red 9) and sometimes tear gas, intended to destroy the stolen money and mark the robber’s body with a bright stain. The chemical reaction causing the explosion of the pack and the release of the dye creates high temperatures of about 200 °C (392 °F) which further discourages a criminal from touching the pack or removing it from the bag or getaway vehicle. Dye packs are used in over 75% of banks in America.”

And returning to rhinos, the www.takepart.com article said: “In addition to discoloring the horn, the pink dye can also be detected by airport scanners, even when the horn is ground into a powder.”

In terms of dyeing the exterior of the horn, it’s important to bear in mind that the images on social media were digitally manipulated and that Rhino Rescue Project did not set out to colour the surface of the horn. But would dyeing rhinos’ horns or elephants’ tusks protect them poaching?

We have not been able to ascertain rhinos’ opinions on having their extremities dyed shocking pink, princess purple or ruby red, but we like to think such a suggestion would be met with a snort!

Rhinos are usually remarkably good at camouflaging themselves by rolling in dust and wallowing in mud and black rhinos, which favour acacia scrub rather than open grassland, are particularly difficult to spot, whether you’re a poacher or a tourist. But colouring rhinos’ horns makes the business of concealing themselves from poachers that much harder.

Perhaps fortunately, the discolouration of rhino horns doesn’t last long. As described in a report published in Pachyderm No. 55 January – July 2014, researchers examined samples taken from rhino horn one month post-treatment found “no visible discoloration through the papillary cornified epidermis of the horn.”

More seriously, and in terms of injecting dye mixed with poison into the horn (also discussed in our ‘thorny issues’), it has been proven that rhino horn is not porous and that a liquid mix does not diffuse throughout the horn. In other words, the poison/dye mix remains in the drilled holes, making it relatively easy to remove and “detox” the horn if it is, indeed, to be consumed. Any remaining external discolouration can be sanded off. And tellingly, dyeing/poisoning Sabi Sands’ rhinos’ horns did not prevent animals from subsequently being poached.

In conclusion, dyeing rhino horns pink, and/or mixing the dye with poison, doesn’t work. No rhino horns have (yet) been detected by airport scanners due to dye having been injected. Money, time and scarce resources would be better spent elsewhere. This idea really is a red herring.

With thanks to volunteer Abigail Salmon for her help with this article.