You are here: Home » News » Like a child in a candy shop 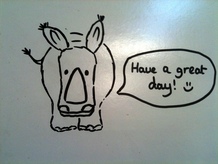 “Like a child in a candy shop.” I have always wondered what that statement meant – there were no shops dedicated to candy where I grew up. But now I know – I felt it. The excitement, the sheer joy that pours out of every pore of my body that made me bounce on my chair all day and have a rather goofy smile pasted on my face while I wasn’t giggling unnecessarily!

The day had come when I would get the chance to do what I had dreamt of for a long time. My candy shop was Chessington Zoo and my ‘candy’ was rhinos. Well, three rhinos to be precise, and the ‘fizz’ was that I was going to touch them! The moment was so thrilling I am still revelling in it – in fact I am smiling at my computer even while I type this, all of 10 days later! It was a team day out like none other I have had so far and I am seriously considering nominating Save the Rhino as the best workplace to work. (I have previously come very close to rhinos but this was the first time I actually touched one.)

The day started off as most other British days (except this summer of course) – grey and very wet. But we held our hopes for some sunshine later, constantly refreshing the weather websites. Leaving shortly after lunch the team made our way to Waterloo Station and hopped on the train to Chessington South. The journey was just about long enough for a quick update on what has gone into making this happen – our relationshipwith Chessington Zoo is relatively new but it is one that is very welcome, especially as it offers a great opportunity to see our beloved rhinos so close to London.

In some form or another, sometimes controversial, zoos have been aroundfor a very long time. Their role in conservation and environmental education are relatively recent developments (1970s) but their contribution is quickly becoming evident. Read here about the role that Cincinnati zoo is playing in saving Sumatran Rhinos, for example. For their role in environmental education, continue reading!

Anyhow, back to the big day. The plan for the day was to walk around the zoo before getting access to behind the scenes at the rhino enclosure – after hours too. Very James Bond.

Having signed in and met Jon – our ‘custodian’ for the day, we were sent off to enjoy the zoo while the gates were still open to the public. Almost immediately I spotted an animal that I had never seen but always wanted to – otters. And this set the scene for the rest of the afternoon, cooing and aahing at every turn… and occasionally holding back a scream. The Trail of the Kings brought us face to face (literally) to Western Lowland Gorillas, Sumatran Tiger, Asiatic Lion and Carpathian Lynx; the boas, pythons and cobras in the Creepy Caves had me hold my breath through the entire walk except when I we came up to the gorgeous turtles and tortoises. Just as we stepped out of the caves we walked past the enclosure for a rhinoceros iguana, so named because it has little horn on its head. [There are many other animals named after rhinos because they have an appendage on their noses – so far I have heard of rhinoceros beetles, rhinoceros hornbill and rhinoceros iguana. Do you know any others?]

Next was Zoofari with all the sound and water effects, whizz around Sealion Bay and Penguin Cove (they had me in giggles!), the meerkats, fennec fox (the cutest canine I have ever seen), porcupines, past a capybara and back to the meeting point for the ‘main event’. Jon handed us over to Ben – our ‘keeper’ who was going to show us around the rhino facility. What an experience that was! Ben took us over to the rhino enclosure (see rather wide eyed team pic at ‘Restricted Access’ door), walked us through their sleeping quarters and then called out to the 3 boys – Kanty, Gyasi and Dozer – who were very much ready for their feed and rest for the evening.

This was the first moment that made me teary in the whole day. I was so giddy with joy! Very few people are lucky enough to identify their calling in life, and even fewer are able to see and touch the reason for their calling. I was one of those and I knew how blessed I was. I am now officially in love with rhinos and dedicated to helping them for the rest of my life.

I have mentioned the role of zoos in conservation above – their role in environmental education is what became evident for the rest of the hour that we followed Ben around hoovering up all rhino facts that he threw at us. Origins, size, age, weight, eating habits, sleeping habits (did you know rhinos get cold in the winter just like we do, and huddle up to keep warm?), characteristics and quirks, learning and development requirements – everything. Ben’s knowledge of the rhinos was phenomenal! He patiently answered all our questions and showed us absolutely everything to do with the rhinos. We even got to walk through the rhino pens – where they hangout all day and Cathy (Director, Save the Rhino International) got rather close to some dung too – she thinks it smells sweet, I think it smells like coffee…

I have to admit it was not easy seeing ‘the boys’ – as they are referred to by their keepers – locked up in cages at night. But as the poaching crisis spreads across the world to UK zoos and museums I consoled myself that they were safer behind bars so to speak than be out and risk losing their lives.

When I could tear myself away from all the knowledge being imparted on us, I found myself sounding rather motherly to the rhinos – I’d like to believe it was because Gyasi and Dozer had been a little scuffle earlier and had traces of blood on their horns – but really it was because they had just become a personal attachment. Eeks.

After a lot more stroking, petting, cooing and giggling like a little girl, we finally called it a day with the rhinos. That was the sweetest ‘candy’ anyone can have – what a shame I couldn’t take any home with me!

And that wasn’t it. Ben took us over to the zebra enclosure next where we got to touch some Grevy’s zebra and then over to the giraffe enclosure for feeding time. Not more fun than the rhinos but it came so close. We all had a fantastic time trying to keep fingers clear of their tongues!

All in all, a truly fantastic day out, topped off with a delicious meal with the team overlooking the Wanyama (Swahili for animals) enclosures at Chessington Hotel.

We petted rhinos, zebra and giraffe in one day. Beat that!

Rhinos: have very poor eyesight, and cannot easily detect an observer standing more than 30 meters away. They do however have an excellent sense of smell and hearing. Most rhinos use piles of dung to leave messages for other rhinos? The dung of young rhino smells different to an adult, & a male different to a female. Unlike white rhinos which are grazers, black rhinos are browsers and have a hooked lip which allows them to eat trees, bushes and shrubs. Rhinos are perissodactyls. Perissodactyls are also known as odd-toed ungulates, i.e. odd-hooved mammals, much like horses, asses, and zebras, the tapirs.

Western Lowland Gorillas: Male gorillas are called silverbacks because as they get older they grow a patch of silvery grey hair on their backs. The older the gorilla is, the whiter his back will get and it shows the other gorillas that he’s the boss.

Sumatran Tiger: the stripes on tigers vary from individual to individual, much like a human fingerprint. The stripes are not superficial – tigers are striped on the skin too!

Rhinoceros iguana: can grow up to 56cm long, not including their tails. Rhinoceros iguana are vegetarians, eating leaves and berries and occasionally the odd insect that may be sitting on them!

Fennec Fox: is a small nocturnal fox found in North Africa. Its most distinctive feature is its unusually large ears, which serve to dissipate heat.

Grevy’s Zebra: The Grévy’s zebra was after Jules Grévy, the president of France in the 1880s. Grévy’s zebra differs from other zebra in that its stripes are narrow and close-set, being broader on the neck, and they extend to the hooves.

Rothschild giraffe: is one of the most endangered giraffe subspecies with only a few hundred members in the wild. It is named after Lord Walter Rothschild, the founder of Tring Museum.