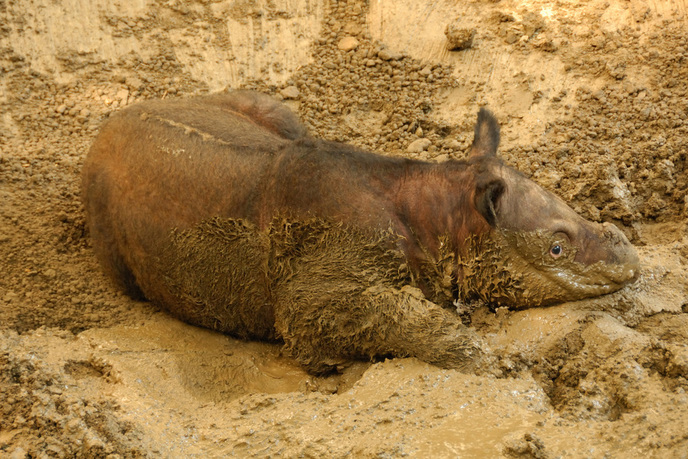 Earlier this month, Sumatran rhino Harapan (Harry), was successfully moved to his new home at the Sumatran Rhino Sanctuary (SRS) in Indonesia, where he will join five other Sumatran rhinos and hopefully contribute towards future breeding efforts.

Eight-year-old Harapan was the last remaining Sumatran rhino outside of South-East Asia, and was moved to his new home from the Cincinnati Zoo and Botanical Garden.

Harry left Cincinnati on Friday, October 30, making stops in Columbus, OH, Chicago, IL, Anchorage, AK, Hong Kong and Jakarta before being trucked and ferried to his final destination in Sumatra on November 1. After the 10,000 mile, 53-hour journey Harapan calmly emerged from his crate

The move represents fantastic international cooperation to save the species, uniting US and Indonesian expertise to help increase the population. The SRS is a 250-acre rainforest complex in the middle of Way Kambas National Park in south Sumatra. The rhinos are part of an intensively managed research and breeding program aimed at increasing the Sumatran rhino population. The animals reside in large, open forest areas where they can experience a natural habitat while still receiving state-of-the-art veterinary care and nutrition.

After completing a mandatory two-week stay in quarantine, Harapan will have access to the forested areas at the sanctuary and will embark on his mission to mate to help save his critically endangered species from extinction. It is hoped that once he settles in, Harapan, whose name means “Hope,” will sire a calf with one of the three females at SRS.

Harapan will join his brother Andalas, who was born at the Cincinnati Zoo in 2001, and Andalas’ male calf Andatu, born in 2012. There are also three females at the Sanctuary; Rosa, Ratu and Bina. Ratu and Andalas are expecting their second calf in May. Every Sumatran rhino birth is an important milestone for the recovery of the species.

The Sumatran Rhino Sanctuary is funded Save the Rhino’s close programme partner, The International Rhino Foundation and operated in partnership with the Rhino Foundation of Indonesia. Donations are urgently needed to support the Sanctuary, please donate now.