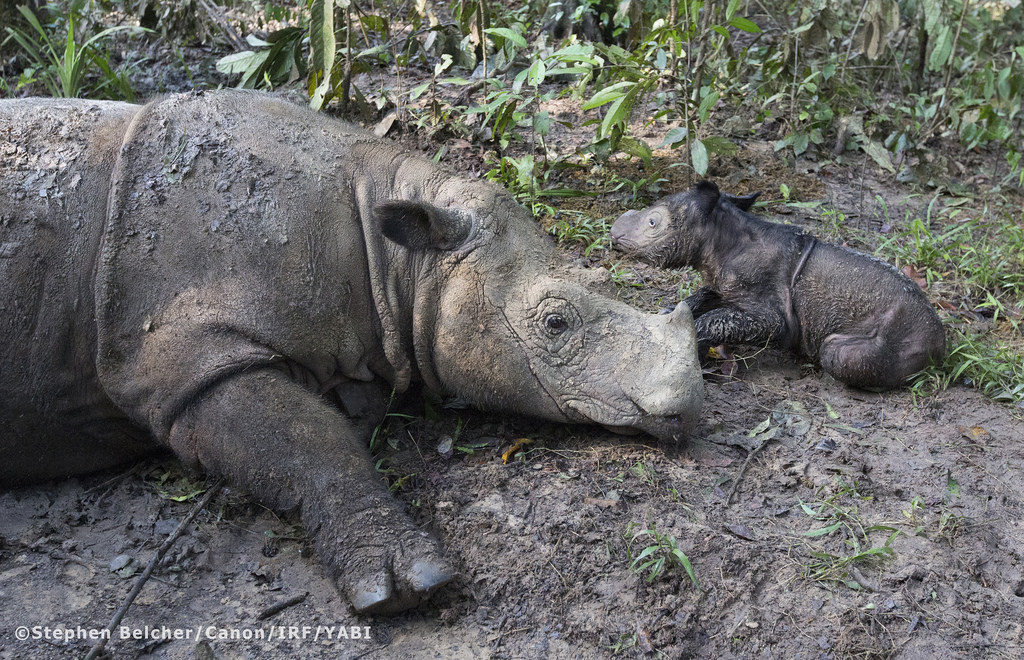 Yesterday, in the early hours of the morning, expectant Sumatran rhino Ratu gave birth to a beautiful baby girl!

At 04:42 on Thursday May 12, following several days of restless behaviour, Ratu gave birth to a healthy and active baby girl. This is 14-year-old Ratu’s second calf; she previously gave birth to male calf Andatu in 2012. Both births took place in the Sumatran Rhino Sanctuary in the depths of Indonesia’s Way Kambas National Park, which was established by the International Rhino Foundation (IRF) in 1997. Executive Director of the IRF, Dr Susie Ellis said that the team were “overjoyed that Ratu delivered a healthy calf and are cautiously optimistic that the calf will continue to thrive” and that they “haven’t stopped smiling since the moment we were sure she was alive and healthy”.

The latter stages of the delivery took approximately 4 minutes and was without complication, with the baby, which weighed approx. 20 kg, able to stand just one hour after the birth. This is now a very important time for both Ratu and her new calf, in which they will bond. The rhinos will be monitored by an expert team of rangers and veterinarians lead by head veterinarian, Dr Zulfi Arsan. Dr Arsan said “Once again, Ratu is showing us that she is a very good mother”.

With fewer than 100 Sumatran rhinos left on the planet, this is a very important for the future of the species, which has suffered in recent years from habitat destruction and population fragmentation. Sumatran rhinos, classified by the IUCN Red List as “Critically Endangered”, are still on the brink of extinction, but this new female is a sign of hope for the future of these magnificent creatures.

Please do support this new rhino through our ‘It’s a Rhino!’ campaign, which will help to provide the Sumatran Rhino Sanctuary with essential supplies such as food and medication for both the calf and the mother, to give this little rhino the best chance possible for a long and healthy life.