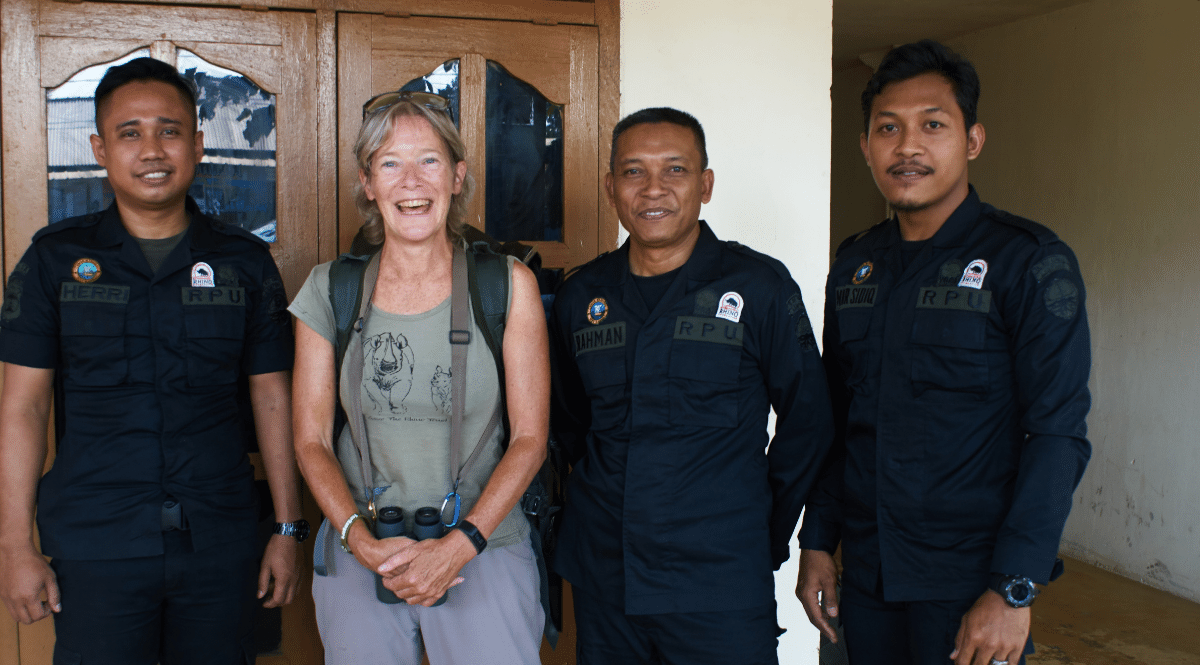 I had never realised that badminton was such a ‘thing’ in Indonesia.

It’s not really a sport I’d ever followed. I’d watched the UK’s mixed doubles team, Gail Emms and Nathan Robertson, win silver at the 2004 Olympic Games in Athens, and I’ve occasionally had a go when I could line up a court, a willing friend, net, racquets and shuttlecock (but generally at least one of those is lacking, if not all). So the excitement at the Sumatran Rhino Sanctuary in Way Kambas National Park in Indonesia, when my friend and wildlife photographer Nick Garbutt gamely agreed to take on one of the rhino keepers, came as something of a surprise.

It was late September 2019, and I’d just been on holiday with Nick, my husband and a group of keen wildlife watchers to see and photograph crested black macaques in Tangkoko Reserve in northern Sulawesi, and Komodo dragons on Komodo and Rinca islands (the former an ambition since an amazing portrait with a car’s wing mirror in the Wildlife Photographer of the Year competition; the latter ever since I’d read Douglas Adams’ Last chance to see).

As I was already in Indonesia, as Save the Rhino has supported Sumatran and Javan rhino conservation since 1995 and 2006 respectively, and as I hadn’t made a work trip to Sumatra since 2007, it made sense to add on a few days to visit the Sumatran Rhino Sanctuary (or SRS). Home to seven Sumatran rhinos, the SRS is closed to tourists, though there are plans to allow limited access to one of the animals when Covid-19 permits. I’d negotiated special permission to visit with Nick, in return for the donation of professional-quality photos. At the same time, we would meet up with CeCe Sieffert, Chief Conservation Director at the International Rhino Foundation (IRF), which works to support the Indonesian government’s Sumatran rhino conservation efforts, with Inov, the IRF’s Indonesia Rhino Manager, and with Widodo Ramono, the Executive Director of Yayasan Badak Indonesia (YABI), to learn more about the progress of the Sumatran Rhino Rescue Project.

Inov had organised a packed few days for us: a tour of the SRS, which had changed dramatically since my previous visit 12 years ago, with additional enclosures for the rhinos, a new visitor centre, expanded veterinary facilities and new accommodation for the keepers; a visit to the reforestation project on the boundaries of Way Kambas National Park; a boat trip along the Way Kanan River to one of the Rhino Protection Unit’s patrol-deployment bases; a meeting with the owners of the nearby Satwa Elephant Eco-Lodge, to find out more about tourism possibilities for visitors to the Park; and, of course, as many visits as we could to see the stars of the show: Bina, Rosa, Ratu, Delila, Andalas, Harapan and Andatu.

We had great conversations with a wide range of people – not just those from the Rhino Protection Unit programme members and the dedicated keepers at the SRS, but also the staff from the Indonesian Ministry of Environment and Forestry, the Lodge manager, and the community members who have been recruited to work on the reforestation project. YABI and IRF are great at sending us formal biannual grant reports and informal updates in-between, but there’s nothing quite like spending an immersive few days talking through the successes and challenges of dealing with a Critically Endangered species like the Sumatran rhino.

Our days were long: up at dawn for a shower and quick breakfast before hurrying over to one of the stalls to wait for a Sumatran rhino to emerge from the forest for his or her daily veterinary checks, then out to the field, and eventually coming back at dusk to get clean once again, check for any urgent emails (if the WiFi was working), have a beer and wait for the barred eagle owl to emerge from its roost in the large tree in front of the SRS. This may not sound exhausting – after all, Sumatra lies on the Equator, so there’s only 12 hours of daylight per day all year round – but the heat and humidity meant that we felt like wet rags every evening.

So I was all the more impressed when Nick, having spotted the badminton court behind the guest bedrooms at the SRS, asked Inov if anyone would take him on one evening. Nick explained that he’d played badminton at university all those years ago and had been very keen; he still has great hand-eye coordination for games like pool and golf. Inov spoke to the SRS staff and they happily agreed to a doubles match, after evening prayers at the tiny mosque situated between the keepers’ dining area and the badminton court. It’s rare that the SRS has visitors; rarer still that a visitor is rash enough to challenge the staff to a match.

Nick is 6 foot 1”, with about 6 or 8 inches’ advantage over the Indonesian rhino keepers. I fondly imagined that his height would give him a major tactical advantage at the net. This was before I learned that the Indonesian male badminton team is currently third in the Badminton World Team Rankings, and is second in the Summer Olympic Games’ cumulative medal haul and World Badminton Championships. Badminton is a bit of a national obsession.

As the four players warmed up (not hard in 30-degree heat), other SRS staff wandered over from the kitchen and dining room, and we all took up our positions around the court. A couple of last practice serves, and the match began, aided by partisan cheering from the spectators.

Nick and his partner played well; there was warm acknowledgement from both halves of the court for the other sides’ winning shots. But the Indonesians were impressive: quick, agile, seemingly impervious to the temperature, and the final score was 21-13 to the home side. A pretty respectable effort from our Yorkshire ringer. Congratulations all round, the third shower of the day for Nick, and ‘just another day at the office’ done.

It’s now some 17 months later, and I’ve been thinking about our time at the SRS. For us, it was a wonderful escape into Sumatran rhino territory for a few days, a real privilege to be able to see such amazing animals at close quarters.

It was also an insight into the daily lives of the staff at the SRS: the keepers who tend the seven precious rhinos, the vets who monitor their health, the team that goes into the forest every day to harvest additional browse for the rhinos. These are tasks that have to happen every single day of the year. The staff live onsite, and in normal times they’d rotate off duty every few days to have some time at home with their families living in villages outside the Park.

But, thanks to Covid-19, rotations have had to change: it’s much safer to have people on duty for longer periods, then off for longer before quarantining again, so as to minimise the risk of catching and transmitting the virus to colleagues. That means two weeks at a time at the SRS. There’s work to keep them busy of course, but in the evenings, well, there’s no mobile signal and slow or patchy WiFi. There’s the communal TV. And there’s the badminton court.

No wonder the SRS staff are all so damn good at badminton.