You are here: Home » News » An uncertain future: the Sumatran rhino 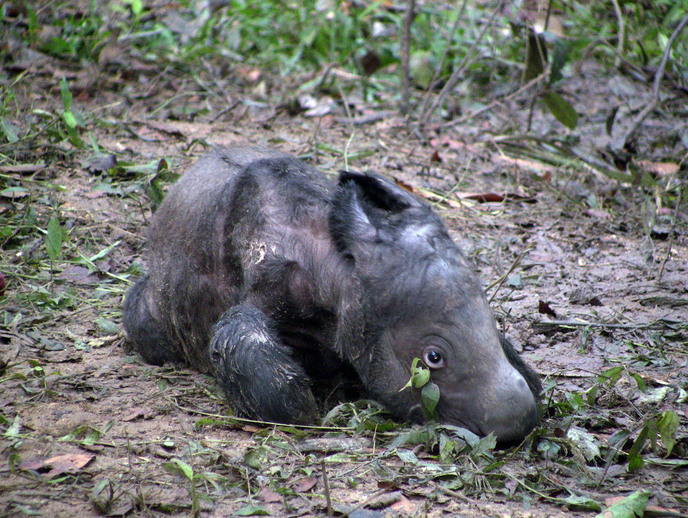 The Sumatran rhino is vanishing before our eyes.

In 1986 it was believed there could have been as many as 800 Sumatran rhinos remaining in the wild. Now, some 32 years later, official estimates suggest there are fewer than 100 rhinos, but many experts believe even that figure is overly optimistic with some stating there could be as few as 30 animals surviving.

We need to act now.

The Sumatran rhino has not had an easy ride. Research from the Marshall University in West Virginia recently shed light on just how long the Sumatran rhino population has been having difficulties. It seems that their numbers declined dramatically due to a climate shift as long as 9,000 years ago and since have not managed to bounce back.

More recently, widespread habitat loss and fragmentation have led to surviving animals struggling to meet and breed in the wild, while the threat of poaching still looms. Earlier this month, an Indonesian soldier was one of three people convicted of trading illegal wildlife trade products including the horn of a Sumatran rhino (though it remains unclear whether this was from a fresh carcass or an old one).

In the last few years, sightings of Sumatran rhino have been confirmed in Kalimantan (the Indonesian portion of the island of Borneo), and in Way Kambas and Gunung Leuser National Parks, but these sightings have been few and far between. Overall, the number of rhinos showing up on camera traps is declining across Indonesia, the last country to have wild Sumatran rhino.

At Bukit Barisan Selatan National Park, an area where it was thought as recently as 2011 that there were some 50-65 Sumatran rhino, there have been no sightings on camera traps since 2014. And when rhino dung samples were collected in 2012 and 2013, to aid population estimates and genetic testing, scientists found that more than 60 percent of the samples were not rhino dung but in fact tapir dung.

In captivity, things are scarcely better. There are just two rhinos, a male, Tam, and a female, Iman, at BORA’s facility in Malaysia, while there are seven rhino at the Sumatran Rhino Sanctuary in Indonesia.

Sadly, Iman, the last female Sumatran rhino in Malaysia has recently had severe bleeding due to a tumour inside her uterus. She continues to fight for her life but the stark reality is that when she dies, Malaysia will only have one Sumatran rhino left.

Against this disheartening backdrop, the Sumatran Rhino Sanctuary has positive news. In 2012 Andatu was born, the first Sumatran rhino born in captivity in Indonesia in more than 140 years. In 2016, just four years later, Delilah a female calf was also born. Today the Sanctuary is home to seven rhino, four females and three males.

For the captive populations to be considered viable, the Sanctuary needs at least 15 breeding animals. And whilst captive breeding and intensive protection in the wild have pros and cons for conservation, the International Rhino Foundation (IRF), which is the main funder of the Sumatran Rhino Sanctuary through Yayasan Badak Indonesia (YABI), is clear on what needs to be done next.

“The team needs to bring rhino living in fragmented populations into the Sanctuary if the species is to be saved,” says CeCe Sieffert, IRF Deputy Director.

The IRF is not alone. A recent petition, “Act Now to Save the Sumatran Rhino,” has obtained more than 130,000 signatures asking the Indonesian government to “act now” and assist conservationists in their efforts to save this incredible animal and support the captive-breeding programme.

Thanks in part to funding from Save the Rhino and its donors, the Sanctuary is expanding ready for new arrivals. The aim is to double the capacity for holding and breeding Sumatran rhinos by creating 10 additional forest enclosures and six stalls. Along with the new space for rhino breeding and a special maternity pen, a new laboratory has been built to support the scientists monitoring fertility and taking blood samples to ensure the rhinos are in top condition.

The team at the Sanctuary has a huge task ahead of it, but there is hope. Captive species recovery success stories do exist, such as that of the Californian Condor. In 1982 there were only 22 California Condors left in the world. Today, because of a captive-breeding programme, there are nearly 500. Similarly, the Scimitar-horned Oryx, a desert antelope declared extinct in the wild in 2000, is now being reintroduced to the wild. These examples and many more give us hope that we can pull this species back from the brink of extinction: but we need to act now.

For more reading on the plight of the Sumatran rhino read Jeremy Hance’s brilliant series for Mongabay.com.

2 thoughts on “An uncertain future: the Sumatran rhino”