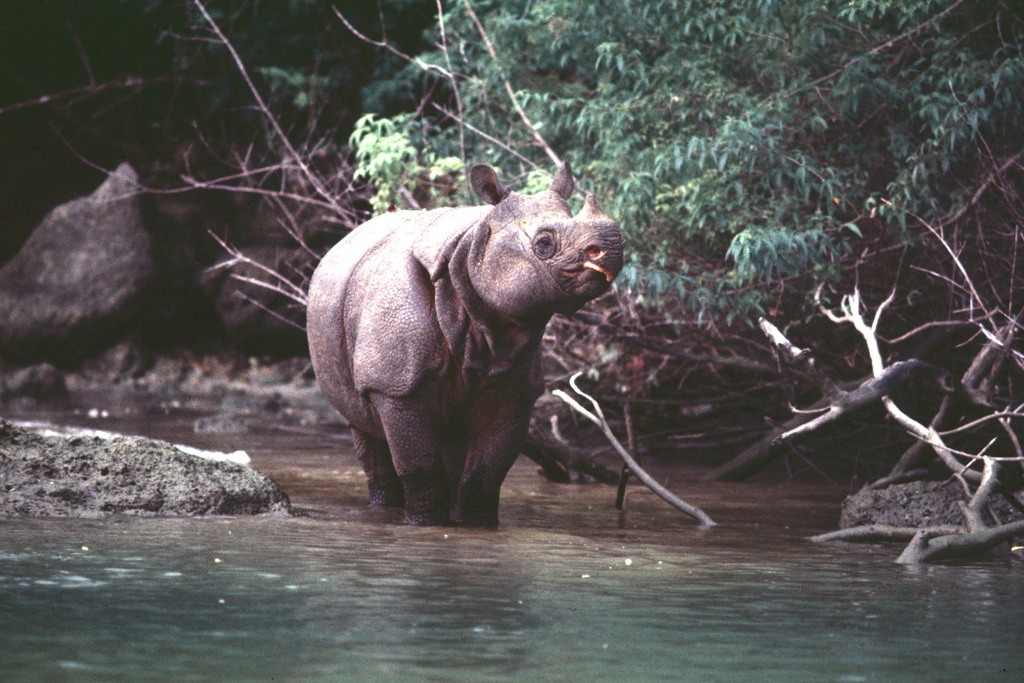 By the time Western conservationists first ‘discovered’ the Javan rhino, the species was already spiralling into a decline. Since the remaining habitat was secured from poachers and forest clearance, the number of Javan rhinos has stabilised – but also stagnated. Now, early plans to stage the first-ever Javan rhino translocation are in the pipeline, with the aim of saving the species once and for all.

Despite being named after their present-day home, the Indonesian island of Java, it is not actually known if the island was a historic stronghold for the Javan rhino species. Javan rhinos once roamed across a huge area of South East Asia, possibly as far as South West China but, today, Javan rhinos are Critically Endangered and possibly the rarest large mammals on the planet. An estimated 67 individuals all live in one region of Ujong Kulon National Park, on the very tip of Java’s western peninsula.

The Indonesian government, working in partnership with local organisation YABI and other rhino conservationists, has made great progress securing the animals’ habitat from poaching, previously a huge threat. A Javan rhino hasn’t been poached since 1999 and, in this Park at least, deforestation has been halted. But now other threats are more pressing and could spell extinction to these mysterious animals.

The Javan Rhino Study and Conservation Area (JRSCA) was created to further our scientific understanding of the species and to expand their habitat. In the last few years, we’ve identified that the remaining population of Javan rhinos are running out of space, an issue compounded by an invasive plant species suppressing their favoured foodstuffs: Arenga palm. More starkly, the risk of natural disaster and disease wiping out the population is perilously high. Yet all these threats pale in comparison to the devastating effects of a potential volcanic eruption and tsunami.

With financial support from Paignton Zoo and Save the Rhino, the JRSCA has already started clearing the Arenga palm and created 5,000 hectares of extra protected habitat for the population. Data gathered from camera traps and surveys has boosted our understanding of this most elusive of creatures. But the biggest task is yet to come: selecting a group of breeding age males and females and translocating them to a new home in order to create a second ‘back up’ population, a kind of insurance policy against total extinction.

Before this can happen, a suitable site has to be located and fertile animals chosen with the physical condition to cope with the move. Statistical modeling shows that the best chance of breeding successfully would occur if five males and three females were translocated into the new habitat. They’d need to not be closely related, so DNA testing and fertility tests would have to take place prior to the move. In the long-term, this second population needs to grow to around 50 animals to become viable, requiring at least 4,000 hectares of forest. We need to gather full information on the remaining animals, their age, fertility and social structures, and then use this data to help finalise this plan to save the species. If the translocation succeeds, we hope to have at least 150 Javan rhinos living on the island within the next two decades.

The first stage of this plan — filling in the gaps in our population data — is already underway. Once we have enough information to help us chose the best translocation site and animals to move, we’ll begin establishing the second population and work with vets and translocation specialists. We’re raising funds right now to make this happen. Throughout history, the Javan rhino has been confused with its much-larger cousin, the Greater one-horned rhino of India and Nepal. In a nod to its similar looks and smaller stature, one of the Javan rhino’s alternative names is the Lesser one-horned rhino. Greater one-horned rhinos, once also on the cusp of extinction, now number in excess of 3,500. We hope your support can help their Javan compatriots stage a remarkable come-back of their own.