You are here: Home » News » How to spot the Javan Rhino 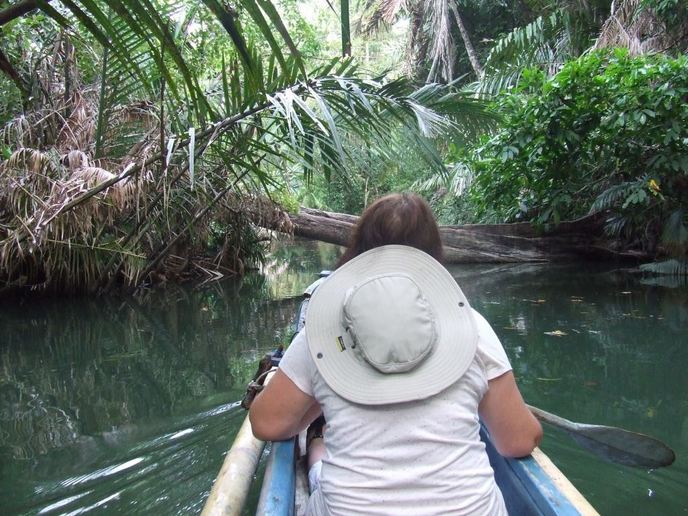 (A version of this article was originally published in The Horn, spring 2013. Author: JW Ironmonger, Save the Rhino supporter)

We started in Sumatra in Way Kambas National Park. There are 25-30 Sumatran rhinos here (not including the captive animals at the Sumatran Rhino Sanctuary), but it is a large Park, each rhino has around 65 km2 to hide in, and this is a notoriously elusive creature. Nico van Strien spent 20 years studying Sumatran rhinos in Indonesia, and he famously never saw one, apart from Rosa and Ratu when they wandered out of the forest and into villages. Marcus Borner spent five weeks in a tree-hide where rhinos were known to roam, and he never saw one. No one ever sees them. They are secretive, small, and well-camouflaged. “Have you ever seen a rhino?” we asked our mahouts at the elephant school. “Never,” they told us. We explored on bikes, we explored on foot, and we went down the Way Kanan river in a noisy boat. There we had what may have been our closest encounter. Sue smelled the familiar pong of rhino scent-marking. We stopped and waited, watching the bank. But nothing. “Have you ever seen a rhino?” we asked the boatman. “Just once,” he told us, and he pointed at the bank. “Right there.”

From Sumatra we took a ferry to Java – but without much optimism. The Javan rhino makes its Sumatran cousin look positively gregarious. Sightings in Ujung Kulon are incredibly rare. It’s a tough place to get to, there are no roads in the Park, most of it is dense jungle, and it is simply too swampy to explore on foot. On Handeleum Island, just off the coast, we met an IRF researcher, a charming man called Inov. He told us he’d been studying rhinos in the Park for 14 years. Had he ever seen a rhino? No. Silly question. Of course not.

Still we had hope. We had come at the tail-end of a long dry season, and we hoped that this would bring rhinos to the riverbanks. We arranged with a ranger to spend nine hours on the Cigentur River in his dugout canoe, over three separate visits. After that we were relying on luck.

And luck is what we had. On our first visit up the river we saw fresh rhino footprints on the bank. It seemed like a good omen. Alone on the river, we felt more like explorers than tourists. The water was the colour of smoky jade, the river was overhung with palm fronds and vines, there were crocodiles in the reeds, and snakes above in the trees. It was an expedition into the heart of darkness. On the second trip we stuck close to the area where we’d seen the footprints. We drifted in near silence. But the hours went past, and we didn’t see rhinos. It was starting to get dark. “We must go,” the ranger whispered and obediently we started to paddle back downstream towards our waiting boat. We abandoned all attempts at silence, talking loudly now, and splashing our oars in the water. And that was when we came upon the rhinos.

We knew it was something big. Very big. Something was thrashing and splashing behind the curtain of palm fronds that shielded the river. The whole undergrowth seemed to be waving. “Rhino,” whispered the ranger, and suddenly there it was – the huge brown backside of a Javan rhino just a metre or so away on the bank. Something else was crashing towards us. I saw the fleeting shape of a smaller rhino and Sue caught a clear sight of them both – a mother rhino and her calf framed in the palm fronds. And then they were gone.

We came as simple tourists, and we’d seen the world’s rarest mammal. It was the most exciting moment you can imagine. We may be the only tourists this century to have seen a Javan rhino and her calf. Sue was in tears. Readers of The Horn will understand this. We have no photographs to prove our sighting – only our accounts and that of a park ranger called Dedi Hidyat. But we have proved that it can be done. And it should be done. Indonesia needs visitors to its parks, and frankly, there are far too few. Every tourist who visits makes it more likely that the parks will survive. There are reasons to be positive about the Javan rhinos. There may be only 13 adult females left, but they are breeding. Crucially, the Park is as inaccessible to poachers as it is to tourists. If we leave them to it, then I do believe the rhinos should thrive. One day it might be as easy to see a Javan rhino as it is to see a white rhino. But for the time being, we have the bragging rights. Thank you very much.

JW Ironmonger is a zoologist and writer. His novel, The Notable Brain of Maximilian Ponder, was shortlisted for the 2012 Costa First Novel Award and is available in paperback from Orion Books.