You are here: Home » News » Tracking the desert-adapted black rhino of Namibia 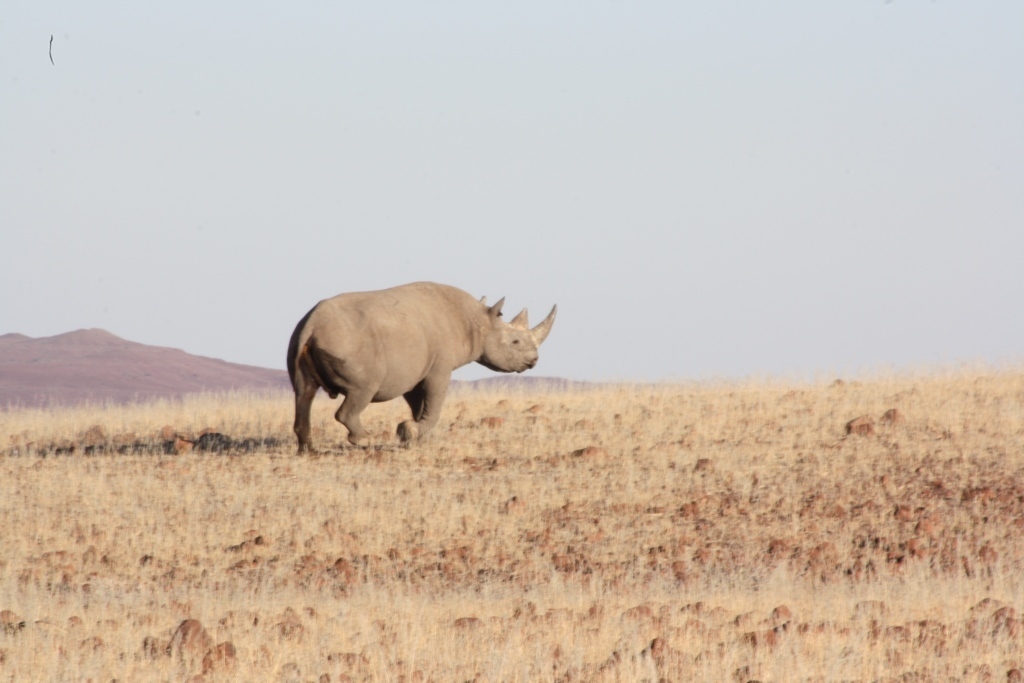 In May this year, as part of Save the Rhino International’s Michael Hearn Internship Programme, I was lucky enough to visit Namibia, and more specifically Save the Rhino Trust (SRT), an organisation that has been working to protect and monitor the desert-adapted black rhino that can be found in the north west of the country, the Kunene Region. An extraordinary country, Namibia contains a relatively small human population, scattered sparsely across the immeasurable desert that stretches for much of its length. The Namib Desert is dry, inhospitable and yet full of life. No matter what, plants and animals perfectly adapted, are able to live and breed here. As you drive through on the long dusty roads, Namibia showcases beautifully its constantly changing landscape. Although arid, the wilderness that stretches away on all sides is ever changing, reacting to the impossibly subtle changes in geology and moisture availability.

Arriving in Swakopmund, was like being in a dreamscape; the town is a popular resort for Namibians, being on the cool west coast. It also has a German heritage, particularly in its architecture. But most strikingly, this German-style town is bordered by huge yellow dunes on one side and the rough Atlantic on the other. The meeting of cold Atlantic air with the hot air of the inland dunes results in regular thick blankets of fog, so despite the towering sand dunes behind, it can be quite chilly compared to the interior. I was greeted warmly by the Fundraising Manager Lorraine who I was to be assisting, and as she is relatively new to the role, she was keen to pick my brains about all things fundraising. I got to grips with a host of tasks from creating new PowerPoints for corporate donors, to adding a unified filing system for past and present documents related to funding. I also got to work on preparing for the time I was to spend in the field, as certain data needed to be collected for donor reporting. The week went by rapidly, and I was kept very busy; I certainly hoped I had been useful.

It was now time to venture from the safe haven of Swakopmund and into the wild. Simson, the Managing Director, picked me up and with his two sons we made our way along the barren Skeleton Coast, before heading inland along the hot dusty roads to the first SRT base camp I was to visit.

Once out in the bush everything ceased, all the things I would normally rely on were defunct, and it was a liberation. No internet, no phone (or at least no signal), everything was about the here and now. I began my journey at Wereldsend, a natural oasis in the red moonscape. Lush vegetation shading the hotchpotch of small stone buildings and tents. I was soon to learn that one of these humble stone buildings had been Mike’s hideaway, where he knew he could escape the strains and stresses of everyday life.

The first patrol with the rangers was unique, an experience never to be forgotten. We were tracking rhino, and although huge, these beasts have an equally huge landscape to hide in. The sheer scale of the place gives the trackers a seemingly impossible task. Despite this I was to see four rhino that morning. The vehicle hobbled over the great red rust stones that littered the landscape. The rhino were high on the hillside, peacefully browsing the poisonous Euphorbia Damarana, they are just one of a handful of animals able to stomach this succulent yet deadly plant.

Glinting off their thick, smooth hides, the morning light gave them a rusty-red tint, matching superbly the rocks around them. A marvel of evolution, the beasts methodically chomped their way through the thick stems, with an occasional swish of their stubby tails. I discussed with Sebulon the issues faced daily by the rhino, which are focused around the increasing poaching threat in Namibia. Primarily, the trackers’ function is to monitor the population, assisting in the continued scientific study; however they also play an increasingly important role in deterring would-be poachers. Sadly the rhino they monitor and strive to protect are still being slaughtered for their horn. Although the poaching rates are currently low, there is a worrying trend, seeming to have spread like a disease form South Africa where the worst poaching for decades has been raging. The problem for the SRT trackers is the scale of the area they need to patrol to have a meaningful presence; there are five patrol teams in total, but the area they need to cover is vast.

Jeff Muntifering, the Scientific Advisor to SRT, is currently assessing the need for more patrols, with the aim to calculate the optimum number of vehicles and tracker teams needed to monitor all the rhinos in the area each month. I was able to spend some time with Jeff working on statistics from previously compiled data and producing graphs in order to work out the mean number of different rhino sighted each month. I also attended a rhino ranger workshop taking place at the environmental centre within camp and assisted in a GPS training day.

After spending several days at Wereldsend I drove with Lesley, SRT’s Director of Field Operations, out to Mai Go Ha, another base camp, this time located in the Palmwag concession. Mai Go Ha was in a beautiful setting, overlooking pools of brackish water isolated along the generally dry riverbed. From here I spent time with the trackers as well as the other SRT staff who keep the place running. I was also able to learn more about Mike and see his grave, alongside that of Blythe Loutit’s (founder of SRT) who died in the same year. Sitting on the majestic handmade bench Mike had created, I spoke to a tracker who had started working at SRT the same year as Mike. He remembered very fondly the trips out tracking the rhino where Mike was clearly totally in his element.

From Mai Go Ha, I had the opportunity to briefly visit the Mounted Patrol Team, which works from Mbakonja base camp, where the terrain is almost totally inaccessible to vehicles. This team travels each day on foot or by donkey and camel, taking everything they need for several days in the bush. When I visited there was a changeover of leave, so although I did not join a patrol effort, I was able to see the camels and the base camp they operated from. This is one of the more remote areas and the camp has only a tiny shed for an office, and a small collection of other buildings made in the traditional manner, I spoke at length with the lead tracker Ludwig, who is also the longest-serving tracker at SRT. We discussed the challenges of this harsh environment and I saw the pain in his eyes when he described finding the most recent poaching case, a mother and calf.

After minimal sleep accompanied by howling dogs from a nearby farm, which made me instantly think of lions, I travelled out from Mbakonja to the last base camp I was to visit, so called Desert Rhino Camp. Approaching from a long and bumpy road far into the rocky Namib landscape, you can’t believe there is anything to be found here. However, rounding a corner there was a smattering of smart and highly camouflaged tents with neat rock-lined paths between. With no fence separating this camp from the wildlife of the desert, it is certainly a wild experience and this is what attracts the tourists. Desert Rhino Camp is run by Wilderness Safaris, which operates a joint venture with Save the Rhino Trust. Guests are able to stay at the camp while SRT trackers will carry out their patrolling and monitoring work, offering the guests a unique opportunity to see these rare and magnificent animals.

Joining the trackers was again a mind-blowing experience. The spoor (tracks) they were able to follow, to me, were just patches of rock and sand, a totally blank canvas, but some indiscernible sign was alerting them to the presence of a rhino. Tracking for several hours in the morning light it was crucial to spot the rhino before 10:00 when the rhino rest up and are harder to find. Finally, she was spotted, to me a speck in the distance, however through binoculars the distinctive head and shoulders of a rhino, peering from behind a large Euphorbia. At this stage an ID was needed, however as guests are paying a premium for a sighting, we radioed the guide cars and they soon trundled up.

The guests disembarked and together, with the trackers ahead, the group moved off to a vantage point on a nearby hillside. I was of course enthralled, and so were the guests. She trotted out from the bush straight towards the group. Everyone was holding their breath. She was calm and appeared nonchalant as she changed track and headed for another Euphorbia. However at this point someone’s weight shifted, a slight crunching of rock and she was alert. Rhino eyesight is very poor, however their sense of smell and hearing is excellent. Thankfully, the trackers always keep downwind, so it was just the sound that gave us away; without the other senses she was unable to distinguish exactly where or what had caused it. A tense few minutes followed, ending in a snort and she resumed her trot, onwards. It was fantastic to see the way the rhino was able to be monitored by SRT’s trained trackers while a careful collaboration with the tourist company was providing a multitude of local jobs, while raising the profile of the rhinos and SRT.

My visit to Namibia was an unforgettable experience on many levels. It was important to see for myself the trials and tribulations of a rhino NGO working on the ground and a privilege to spend time with the skilled staff, working on all aspects in this organisation. And there is so much more to tell than I can fit on this blog. My greatest thanks go to Lorraine, Marcia and Alta in the Swakopmund office; Simson, Lesley, Bernd and Jeff who made sure I was in the right places at the right times; Elfrieda and Johan for welcoming me into the DRC fold; and Sebulon, Martin, Ludwig and the rest of the tracker teams who gave me some unforgettable rhino experiences on patrol.

One thought on “Tracking the desert-adapted black rhino of Namibia”