You are here: Home » News » Death of a rhino: can a photograph inspire action? 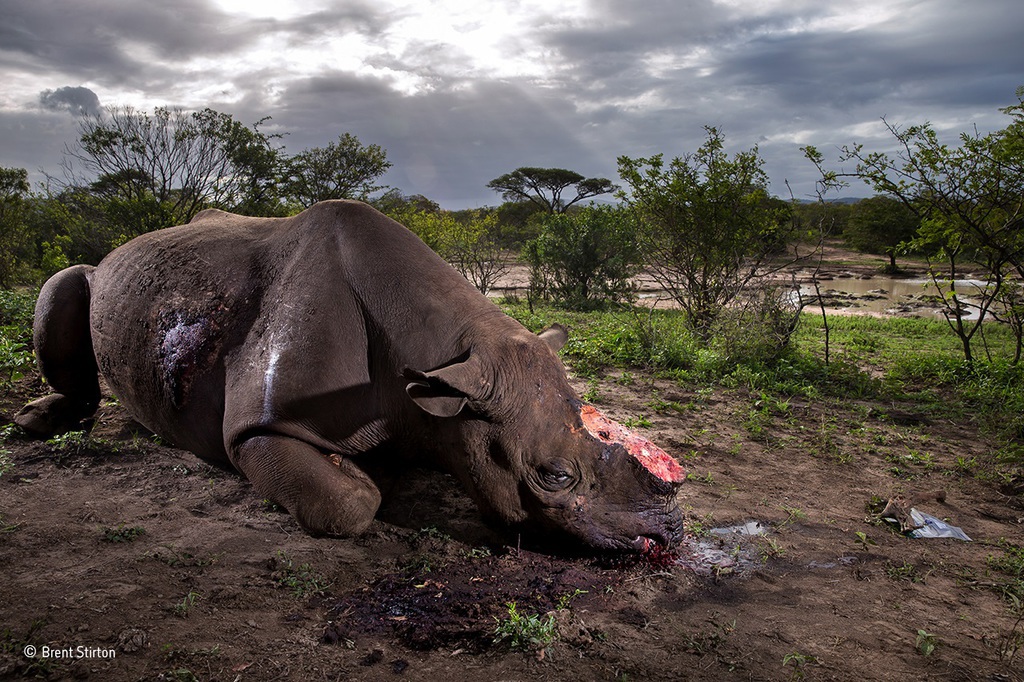 Today we saw an incredibly powerful image by Brent Stirton win the Wildlife Photographer of the Year 2017. His image Memorial to a species, frames a recently shot and de-horned black rhino in South Africa’s Hluhluwe-iMfolozi Park.

Once the most numerous rhino species, black rhinos are now critically endangered. Large-scale poaching of the black rhino resulted in a dramatic 96% decline from c. 70,000 individuals in 1970 to just 2,410 in 1995.

Cathy Dean, CEO at Save the Rhino International, explains why images showing the true brutality of the poaching crisis are so important,

“After almost 10 years of the current rhino poaching crisis, it’s hard to keep the shocking reality in the public eye. The statistics – 3 rhinos killed every day, more than 1,200 killed every year – are still almost as grim as they ever were, but they don’t tell the real story: the horrific brutality, cruelty and pointless killing of one of the world’s most iconic beasts by criminal gangs who are only interested in the profit they can make. How can anyone look at Brent Stirton’s image and not feel moved to do something to help save a species under constant threat from human greed?”

The media generally only covers the most horrific or unusual incidents, such as the shooting of a rhino in a French zoo, or the 12 days in July during which 23 rhinos were killed in Hluhluwe-iMfolozi Park. But for the rangers and rhinos in Africa and Asia, the strain of the last nine or 10 years must be unimaginable.

Our vision is for all five rhino species to thrive in the wild and, through the work of some of our incredible partners on the ground, we are seeing wins all the time.

Black rhino numbers have risen to a current population of between 5,042 and 5,458 individuals. Importantly, their geographic range has also increased, with successful reintroduction programmes repopulating areas that had previously seen their native black rhinos poached to local extinction in the 1970s and 80s.

If the stat – 3 rhinos killed every day – doesn’t shock you. Hopefully this image will.

Beating almost 50,000 entries from 92 countries, Brent’s image will be on show with 99 other images selected by an international panel of judges at the fifty-third Wildlife Photographer of the Year exhibition.

One thought on “Death of a rhino: can a photograph inspire action?”