You are here: Home » News » Why rangers love rhinos 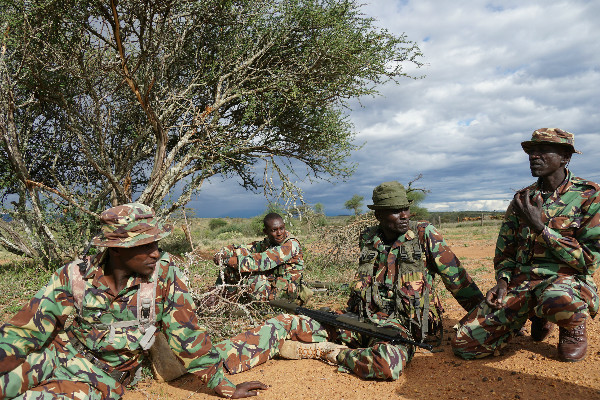 Towards the end of the day, Jamie Gaymer (Conservation Manager) and I caught up with one of the armed patrol teams, about to go out on live deployment. It was just after the full moon when I visited in May 2017, and full-moon periods tend to be high-risk for poaching, particularly during the rains, which aid poachers by washing away tracks and scent. The recent unrest in Laikipia County, following a period of drought and exacerbated by the general election later this year, means that Ol Jogi’s rangers have to be particularly vigilant.

The training they have received from 51 Degrees Ltd (funded with help from Zoo-Berlin and Tierpark Berlin) has given them the discipline and confidence they need if ever they are engaged in a contact with armed gangs. In a recent case, seven of Ol Jogi’s rangers had been asked to help retrieve cattle that had been stolen by rustlers from the north. They followed the tracks, caught up with the cattle, rounded them up and sent them back with two members of the team. The remaining five rangers were then confronted and fired upon by up to 30 of the thieves’ fellow villagers; it was thanks to their training that enabled them to stage a tactical retreat and escape with their lives.

“Tubeless”, one of the rangers (so nicknamed because during the recruitment selection process he’d run 26 km barefoot and received no “punctures” to the soles of his feet) explained about the First Aid training they have received from 51 Degrees Ltd. One of the key elements they learn is “ABC”: A for airways – check first that they are clear;  B is for breathing – establish whether the victim is breathing; and C is for circulation – check their pulse via the neck, wrist or femoral artery. Jamie had already told me about one incident when a ranger returning from patrol had walked into an elephant just 100 metres from the camp; the elephant had attacked, tusked him in the stomach and then tossed him into a small crevasse, which actually saved his life – the elephant was unable to gore him again. Initially knocked unconscious, the ranger came round, waited until the elephant had moved off, and then somehow staggered into camp and alerted his comrades. Having recently received medical training, they immediately knew what to do and packed the wound with blood bandages to stem the bleeding, called for aerial support and got him to the hospital, where he eventually made a full recovery. Another ranger then told me that he had gone on leave to visit his family, and a neighbouring family had shouted for help when their one-year-old baby boy swallowed a marble, began to choke and was on the point of dying. The ranger went through the ABC routine and, realising that the child’s airway was blocked, grabbed a spoon, flicked out the marble, and saved the boy’s life.

Once Jamie had finished his briefing for the night ahead, I took a few minutes to ask the rangers what they thought about black rhinos: I was curious to know how they felt about these animals that have attracted armed poachers to the County. Ol Jogi’s last rhino poaching incident took place in March 2015 – just over two years ago – but the threat is ever present. I was interested by the answers: one ranger said that he was the father of two children, aged two and three, and that he wanted them to be able to see rhinos when they were grown up. Another explained that rhinos are in danger and might go extinct; he didn’t want that to happen. And others said that they owed their livelihoods to black rhinos: without rhinos, they wouldn’t have jobs, they wouldn’t be able to live the way that they do. I visited one of the main ranger camps and saw how the rangers’ families are able to live with them in well-equipped compounds, shaded by trees with plenty of space for the children to run around; a school on Ol Jogi’s land means that all of the rangers’ children receive good education.

Whether the rangers value wildlife for its own sake or as a means of employment, it is very clear that Ol Jogi’s black rhinos are the guiding reason for a massive infrastructure of support for community members throughout this part of Laikipia. You could even say that, were it not for the rhinos, that little boy would have died.

One thought on “Why rangers love rhinos”