You are here: Home » News » Giving rangers a more comfortable base at Borana Conservancy 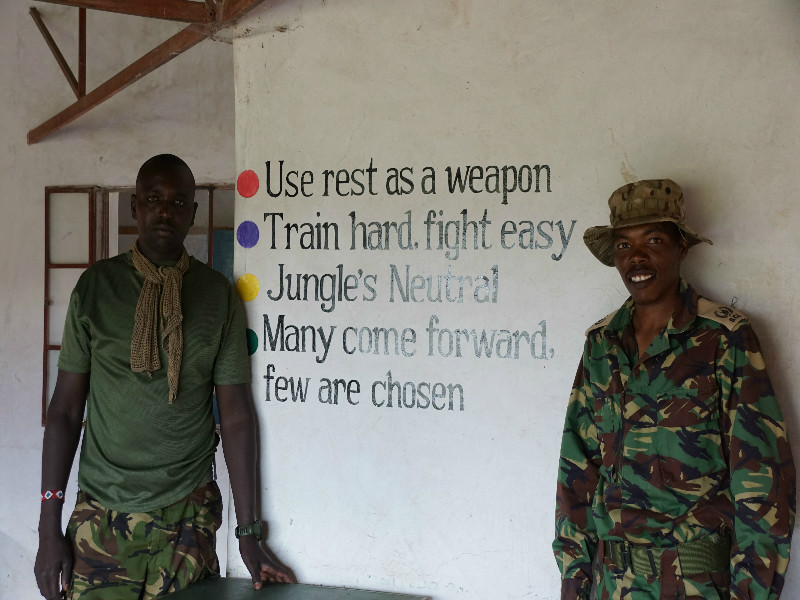 While on this field trip to Kenya, I heard someone suggest that – rather than being called “Save the Rhino” – we rename ourselves “Save the Ranger”. That’s not too far off what we really do: our grants towards our first (and top priority) rhino conservation strategy, that of protecting viable populations of rhinos in the wild, is really all about giving field rangers – whether rhino monitors or anti-poaching teams – the skills, equipment and motivation they need to do their jobs.

For a long time now, our grants have helped pay for basic but vital equipment such as binoculars, GPSs, ration and hydration packs, tents, sleeping bags and mattresses. We’ve also paid for training courses on how to seal off a crime-scene and how to manage an informer programme. More recently, quite a few of our grants have focused on upgrading the living conditions for rangers within the protected area: putting in solar power equipment to provide light, hot water and charging points for mobile phones and radios; building accommodation and ablutions blocks, kitchens and mess areas. It’s basic stuff, but makes the world of difference, particularly when you’re coming off a nightshift and need some peace during the daytime to catch up on much-needed sleep. One of the mess areas I inspected had some “int. dec.” too: a sign-writer had been on site for other work, and they’d co-opted him into painting onto the walls some of their training instructor’s favourite (if gnomic) sayings: “Use rest as a weapon” and “The jungle’s neutral”.

Fortunately, many of our funders think the same, and I was very pleased to be able to visit several new outposts at Borana, funded by USFWS, the Anna Merz Rhino Trust and the Lubin Family Foundation. Giving each ranger their own bedroom with lockable storage space seems like such a simple thing, yet having a bit of private space during the three-week rotation allows the guys to switch off, stay fresh, and then enjoy each other’s company when they eat or patrol together. The contractor that Borana has used to build these new blocks has thrown himself into the task and suggested several tweaks to the basic plan, having achieved some cost-savings: he has particularly prided himself on casting concrete sofas on the verandas linking the bedrooms. A television and dartboard has been provided for each block.

I know that if I were away from my family for three weeks at a time, out on night-patrol every night, I’d want a few creature comforts when I got back to base. The rangers deserve our practical and moral support.