You are here: Home » News » Reading beyond the statistics: Why South Africa’s poaching crisis isn’t over 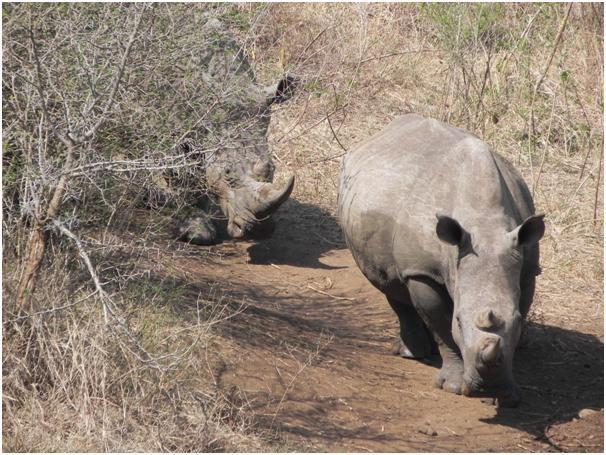 In South Africa, rhino poaching statistics for the first half of 2017 have been published by Minister Edna Molewa’s Department for Environmental Affairs (DEA). The latest figures show a slight decrease compared with the same period last year. But regional spikes in areas like KwaZulu-Natal and an overall rise in poaching attempts has dampened any cause for celebration – and given rise to many more questions about the state of the poaching crisis beyond the headlines.

According to the DEA’s official statistics, 529 rhinos were poached in South Africa from January to June 2017 inclusive, compared with 542 for the same period in 2016. In Kruger National Park, home to the largest concentration of rhinos in the world, “a total of 243 rhino carcasses were found between January and the end of June 2017. This is compared to 354 in the same period in 2016. This represents a decrease of 34%.”

In her public statement, Minister Molewa attributed this success to a range of measures including ranger training and support. She highlighted successful arrests and prosecutions of poachers, and the tough sentences handed to those convicted, as well as outlining efforts to raise the bar in the regions of South Africa currently experiencing the brunt of rhino poaching. From January to June of this year, 359 alleged poachers and traffickers were arrested in South Africa. Ninety alleged poachers were apprehended in Kruger National Park, with 112 arrested outside the Park’s borders.

The latest statistics have given rise to a number of questions. South Africa collects quarterly statistics for rhino poaching incidents and has received some criticism for publishing these at irregular intervals. Statistics for the second half of 2016 (and thereby the whole of 2016) were only published in February 2017. How these statistics are collected, and whether they are truly representative of the national poaching crisis have also come into question. A pregnant cow killed by poachers is counted as one death, and the age and sex – and reproductive maturity – of killed rhinos isn’t publicly shared; leading some to argue that current methods downplay the severity of the crisis.

TRAFFIC’s Tom Milliken made the very pertinent point that “Although the numbers appear to be moving in the right direction, it’s simply not possible to regard the sustained poaching of three rhinos each and every day as anything less than a continuation of the crisis.”

13 less dead rhino, has to be good news. But the press release and focus on stats left me feeling flat about what isn’t being said and how much bigger and more complex this is than just numbers. What about the number of poachers with repeat offenses while out on bail; or the number of large cases with charges in triple figures that are dragging on for years… very concerning is the increase in the numbers of people injured or assaulted during poachings and incursions is increasing (not just rangers and APU but managers and staff are also being targeted). It also fails to mention a disturbing trend (both local and globally) of poaching in captive facilities including orphanages, quarantine facilities and zoos .The levels of compassion fatigue and burn out is rising, the crisis is taking a big psychological toll on those at the frontline and on owners/ staff involved in these incidents.

Attacks on rhino conservationists have become increasingly brutal. The horrific attack on Thula Thula Rhino Orphanage and its office staff, the first poaching of a zoo-kept rhino on European soil, and brazen attacks on rhinos in guarded bomas have created a palpable sense of shock in the world of rhino conservation and we all have concerns that the general public are becoming desensitised – and disengaged.

If the rest of the year continues on the same path, 2017 could see the number of South African rhinos poached reach a similar level to 2016. While the severity of the situation shouldn’t be diminished, and clearly the South African government and conservationists have a huge task ahead, stable numbers are better than a steep decline.

Dr Richard Emslie, Scientific Officer of the African Rhino Specialist Group was recently quoted in the press saying that the current projections demonstrate that South Africa is “holding the fort” against poaching syndicates. Intensive, military-style protection is working when funds are available. But can South Africa replicate this approach across all of its game reserves – and can it sustain the funding? What impact will a legal domestic trade have on these statistics?

In Hluhluwe-iMfolozi Park, Section Ranger Dirk Swart is leading a team of rangers, working hard in the toughest conditions, to try and stop the onslaught of poaching gangs in the Park. We’re helping Dirk’s team by funding equipment and basics for rangers. Can you help us give them a fighting chance?

6 thoughts on “Reading beyond the statistics: Why South Africa’s poaching crisis isn’t over”